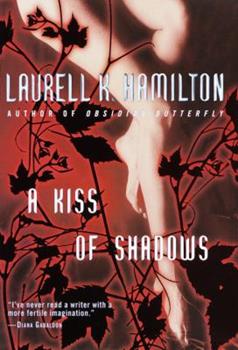 A Kiss of Shadows

(Book #1 in the Merry Gentry Series)

"All it would take was my true name being mentioned after dark, and it would float back to my aunt. She was the Queen of Air and Darkness, and that meant that anything said in the dark was hers to hear, eventually. The fact that spotting the missing Elven American Princess had become more popular than spotting Elvis helped. Her magic was always chasing blind leads. Princess Meredith skiing in Utah. Princess Meredith dancing in Paris. Princess Meredith...

Published by Johanna , 5 months ago
Book was good. Condition was great for used.

Published by Kimberly , 2 years ago
Just opened this to start my reread of the Merry Gentry series and found it is a signed copy!! Definitely a nice surprise!!

great start to a new series

Published by Thriftbooks.com User , 20 years ago
I read this book before reading any of Ms. Hamilton's other novels. I wasn't disappointed. It was a bit slow to get into, but once involved, it didn't let me go, and I ended up reading the entire book in one sitting. Merry Gentry is another strong independent heroine, but much more feminine (but no less deadly) than the Anita Blake, the heroine of Ms. Hamilton's hit series. Merry is a sidhe princess in hiding who is forced to come back to her childhood home in order to hear the proposition that her aunt, the queen of the Unseelie court has for her. This series is also much more political than Anita Blake's (yes, there are vampire politics and were politics, but not to this extent). This series is more of a "fairy-tale" than Anita's is, and is therefore, not nearly as dark as Anita's story. Will Merry beat out her cousin Cel for the throne? For if she fails, she will undoubtedly be killed, and all those that are loyal to her as well. This story is a great beginning and I am eagerly awaiting the next installments.

Published by Thriftbooks.com User , 21 years ago
Merry, Merry, quite contrary, How does your new court grow? With silver, black, green, and blue, Lovers lined all in a row!A Kiss of Shadows is the first book of a really cool, really erotic, really breath-taking series! LKH's unique writing style is quite evident throughout this book. Merry is a lot like Anita: short, pretty, tough, intelligent, possessing some powers that have yet to be discovered. But of course, Merry has a MUCH more interesting sex life than Anita. Merry Gentry is an awesome character, working at the Grey Detective Agency in Los Angeles: Supernatural Problems, Magical Solutions. However, Princess Meredith NicEssus leads an ABSOLUTELY captivating lifestyle at the Unseelie Court. Especially when Merry's Aunt Andais, Queen of Air of Darkness, wants Merry, and Merry alone, to sleep with the beautiful royal Guards and produce an heir to the Unseelie throne. Now THAT is an extremely interesting proposition. I really like all the hot sidhe characters that LKH introduces, especially Doyle (the Queen's Darkness) and Frost (Killing Frost). Screw the other males in the book (I know Meredith will probably do each of them sooner or later).MY favorite male in the book is definitely Cel, Andais's son and Meredith's cousin, Prince of the Unseelie Court, heir to the throne (or at least he was before Meredith returned to court) Sure he's cruel, evil, and sadistic, but what can I say? I have a weakness for gorgeous bad guys in black. I would just love to see Cel plotting to kill Meredith again (or bed her). Something tells me that we'll see him many more times to come in the series.I just totally love this series! Now I don't know which series is better: Anita Blake or Meredith Gentry? Which world is more interesting: vampires or faeries? Who is more powerful: Anita or Merry? Which series has the sexiest men: Jean-Claude (my fave), Asher, Damian, Edward, Richard (hate him), etc, or Cel, Doyle, Frost, Rhys, Galen, etc? Parallel worlds, parallel characters:Anita=Merry; Jean-Claude=Doyle; Richard=Roane; Asher=Galen; Bert=Jeremy; Edward=Frost; Jason=Rhys; Gabriel=Cel; Marcus=Barinthus; Raina=Andais; Larry=Kitto; Ronnie=Lucy; Cassandra=Rozenwyn; Catherine=Keelin; Marianne=Teresa; Olaf=SholtoA Kiss of Shadows is perhaps my favorite book of all time now, knocking out The Killing Dance from the #1 place. I am so so glad that I bought this book, expensive as it may be. Laurell K. Hamilton, you are simply the best!!!

Published by Thriftbooks.com User , 21 years ago
I thought the Anita Blake series was damn good, but the Merry Gentry series looks to give it a run for its money!Merry is actually Princess Meredith NicEssus, the black sheep of the Unseelie court because she is not full-blooded sidhe. Her aunt is the Queen of Air and Darkness and her son is heir, with Meredith next in line. After enduring duel after duel at court, Merry has decided to escape and has spent 3 years in Los Angeles as a detective, with her guard always up against her vile relatives.Now, however, her cover is blown, and her aunt has sent her men to take Merry back home. Who Merry can trust and who will kill her without a second thought is a very dangerous guessing game, and often, loyalties change in a second. This is a very gory, very explicit book. If multiple partners bug you, or sex without love bugs you, or if you're squeamish, it may not be for you. If you like tender romance or action without too much gore, there are plenty of other books, but for me, this was one heck of a read. It's powerful and filled with imagination. The rules of the Unseelie Court can always be bent, usually to the Queen's benefit, but Merry is no fool, and I will certainly be awaiting the next installment in this fabulous series.

As Done for the Undead and Lycanthropes, so too for Faeries!

Published by Thriftbooks.com User , 22 years ago
* As an avid fan of Laurell K. Hamilton's Anita Blake series, I was excited to hear that she was beginning a new series. In reading "A Kiss of Shadows", I have found that Hamilton has once again captured that unique flavor that crosses the genres. A fantasy book set in a modern day United States, it also contains elements of political intrigue, suspense, elemental magic, private investigation, and sexual elements that push the envelope. As readers we are given a glimpse into the social and political world of the faerie court. In much the same way as vampires and lycanthropes are common to the world of Anita Blake, so to are magic and the faerie courts to the world of Meredith 'Merry' NicEssus. * In the person of Meredith, we are presented a woman of strong will, who walks the fine line between human and something else. As we come to discover the environment in which Merry grew up, we can begin to understand what motivates her. Whether it is her interaction with her aunt (Queen of the Unseelie Court), her aunt's personal guard, her cousin Cel, or those around her in Los Angeles, we find that her reactions adjust to the situation around her. * The aspect of "A Kiss of Shadows" that intrigued me the most, was the manner in which it approaches the good/evil aspects of society. What humanity might think of as evil in human society, Merry might view as necessary to have survived her years in the Unseelie Court. Meredith's views on sex are also rather unique. Because of her upbringing, she lacks a certain sense of modesty that extends itself further into her relationship views. * Never to be outdone; Hamilton breathes life and personality into every character in her books. From the heroine to the supporting characters, and in the case of this book, even things and places like 'The Black Coach" and the mounds of the Unseelie Court. Even the diverse races have their own unique feel. * As you enjoy the rollercoaster ride of emotions "A Kiss of Shadows" takes you on, you arrive at the end with an insatiable hunger for more. If I was eagerly anticipating the arrival of this book, I find I can hardly wait for the next book in the series. * Despite all of the enjoyment I got from reading/experiencing "A Kiss of Shadows", I was left with one unanswered question. Does this book take place in the same world as the Anita Blake series, or are the similarities merely cosmetic? Additionally, if both characters (Anita and Meredith) do live in the same world, might we some day have them meeting to overcome a common foe?

This isn't an Anita Blake book.

Published by Thriftbooks.com User , 23 years ago
A Kiss of Shadows is Ms. Hamilton's new series. On her web sites they call it the Fey series. The next Anita Blake book will be Obsidian Butterfly, and it is due out in 2000. If you want more info on The Anita Blake books and the Fey books go to it's called the Alpha's Lair and it has a news and rumors page.
Trustpilot
Copyright © 2022 Thriftbooks.com Terms of Use | Privacy Policy | Do Not Sell or Share My Personal Information | Accessibility Statement
ThriftBooks® and the ThriftBooks® logo are registered trademarks of Thrift Books Global, LLC