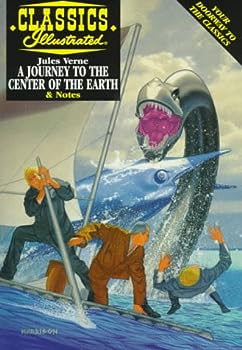 A Journey to the Center of the Earth (Classics Illustrated)

An adventurous geology professor mounts an expedition that descends into a subterranean world of luminous rocks, antediluvian forests, and fantastic marine life -- a living past that holds the secrets to the origins of human existence. Jules Verne's 19th-century action classic has the added appeal of a psychological quest, in which the journey is as significant as the destination.

Published by Thriftbooks.com User , 16 years ago
Jules Verne is definitely the father and master of science fiction. In this book, he chronicles the adventures of a German professor, his nephew, and an Icelandic guide into the depths of the earth. When I read it, it was very different from what I expected. Having been exposed to various film and television versions of this story, I imagined some sort of drilling machine was involved. Also, I had thought that there was some interaction with primitive tribes in the underground realm. On reading this book, you'll discover a very different story. The professor buys and old book, and finds an ancient manuscript written by a famous alchemist in which the alchemist claims to have journeyed to the center of the Earth. The professor inspired by this claim rushes to Iceland to retrace the alchemist's footsteps. He drags his reluctant nephew along with him, and hires a guide in Iceland. These three men proceed to walk into the crater of a volcano, and they follow the empty lava tubes into the depths of the Earth. This is more of a survival story than anything else. They face shortages of food, water, light, and more. Verne really knows how to keep a story moving. For adventure fans, this is a great book to read!

Published by Thriftbooks.com User , 19 years ago
This book proves Verne's greatness as a writer of fiction. The science in this science fiction flies largely in the face of modern science, yet the read is no less gripping today than it was in its infancy. The story is pretty simple. Professor Lidenbrock, a neurotically impatient scientist, discovers a cryptic manuscript written by a long-dead explorer; with the help of his nephew, he decodes the cryptogram to read an account of a journey to the center of the earth begun beneath a dormant volcano in Iceland. The nephew, Axel, a talented geologist and mineralogist himself, refuses to believe that the core of the earth is not exceedingly hot; additionally, he cares more about Grauben, the eccentric professor's ward, than risking his life on a scientific adventure. He proves unable to dissuade his uncle and thus joins with him on a journey to Iceland. There, they hire a stoic Icelander to lead them down into the earth. Most of the action takes place underground, with the adventurers suffering several trials, daring risks, and finally discovering a whole new world hidden miles below the earth's crust. The ultimate trial and danger they face consists of returning to the surface.Axel narrates the story, and the strength of the novel lies in his character. The professor and the Icelandic guide are unusual personalities, but Axel is very real and easy to relate to. He really does not want to go in the first place, and he is most liable to greet dangers and risks by bemoaning his fate and declaring his party done for in their foolish efforts. It is he who suffers the most privation when the men's water runs out, and it is he who finds himself lost in the utter blackness of the caverns for three days. When things are going well, though, Axel becomes wildly excited about the mission and temporarily forgets about his fears. This all goes to make him a very sympathetic character. Without him, the story would be a rather dispassionate account of an impossible journey by bland, unbelievable characters. You do have to shift your mind into low gear a few times when the characters begin speaking about the different types of minerals and rocks they are encountering, but overall the plot is rather thrilling, and you cannot help but begin early on trying to ascertain a way in which the intrepid explorers can return to share their discoveries with a skeptical scientific community. Verne knows how to tell a story, and you don't have to know a single thing about science to enjoy this novel immensely.

Journey to the center of the Earth book review.

Published by Thriftbooks.com User , 19 years ago
This is an exiting book full of adventure. It is about three people named Hans, Professer Hardwigg and his nephew Harry. The story takes place when Professer Hardwigg discovers a piece of parchment with the name of a famous explorer that went to the center of the Earth. Professer Hardwigg wants to do the same. They climb in to Mt.Sneffles with a guide named Hans. They have lots of adventures with prehistoric animals and travel in places you wouldn't even expect. The ending is very exiting but you will have to read it to find out. I recomend this book to people who like adventure stories. I think it is a great book .

Published by Thriftbooks.com User , 22 years ago
Excellent book. A bit slow moving at first but it quickly finds a good pace. It was so involving that I read the book in two sittings. The first part is like a travelogue and was very interesting. After giving great detail for most of the book, I didn't like the way it ended so quickly. I would recommend this book to anyone looking for a good adventure story.

Three explorers go to the center of the earth

Published by Thriftbooks.com User , 22 years ago
This is a classic novel by Jules Verne. In the story, Professor Hardwigg and his nephew Harry discover an ancient parchment by an alchemist named Arne Saknussemm. They travel to Iceland and climb an extinct volcano called Sneffels. With them is the Icelandic hunter Hans. They journey into the center of the earth, in which Harry gets lost. They come upon and ocean and cross it. While they are on the sea they witness a battle of ancient sea monsters. Eventually they are thrown out of a volcano on Stromboli, an island in Italy. This was a wonderful book, but sometimes it went into too much detail. Still, a classic five star book. I don't see why anyone would give it 4 1/2 stars. It is simply absurd. I recommened this book to anyone with a good imagination.
Copyright © 2020 Thriftbooks.com Terms of Use | Privacy Policy | Do Not Sell My Personal Information | Accessibility Statement
ThriftBooks® and the ThriftBooks® logo are registered trademarks of Thrift Books Global, LLC