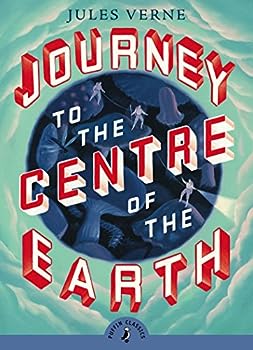 Journey to the Centre of the Earth (Puffin Classics)

This description may be from another edition of this product. An adventurous geology professor mounts an expedition that descends into a subterranean world of luminous rocks, antediluvian forests, and fantastic marine life -- a living past that holds the secrets...

Published by Andi , 1 year ago
I grew up watching classic movies and this was one of our faves. I finally gave in and read this book, since it had been sitting on my shelf for years. Glad I did. Good story, Fun, and an easy read.

Published by Thriftbooks.com User , 11 years ago
Axel's eccentric uncle, professor Otto Lidenbrock, finds a parchment in a very old book. Arne Saknussemm wrote it saying he had been to the center of the earth. Otto immediately set off with Axel to Iceland, to start the journey Axel's main concern is staying alive. With help from their guide Hans, they started their way to the center of the earth. Will they get back to the surface alive? Read to find out! I recommend this book for adventurous people ages 10 and up.

Couldn't put this book down!

Published by Thriftbooks.com User , 12 years ago
Believe it or not at 65 I never read this book or saw the movie. It kept me rivited to the chair. I'd read until I couldn't keep my eyes open, then get back to it ASAP. The characters came to life for me. I'd recommend it to adults and kids. It was a Kindle FREEBIE...Imagine that?!

Published by Thriftbooks.com User , 12 years ago
This is a great classic novel. It is a fun read and much better than the movies based on it. Give yourself a treat and read this book regardless of what you might have thought of the Hollywood versions.

Published by Thriftbooks.com User , 19 years ago
This book proves Verne's greatness as a writer of fiction. The science in this science fiction flies largely in the face of modern science, yet the read is no less gripping today than it was in its infancy. The story is pretty simple. Professor Lidenbrock, a neurotically impatient scientist, discovers a cryptic manuscript written by a long-dead explorer; with the help of his nephew, he decodes the cryptogram to read an account of a journey to the center of the earth begun beneath a dormant volcano in Iceland. The nephew, Axel, a talented geologist and mineralogist himself, refuses to believe that the core of the earth is not exceedingly hot; additionally, he cares more about Grauben, the eccentric professor's ward, than risking his life on a scientific adventure. He proves unable to dissuade his uncle and thus joins with him on a journey to Iceland. There, they hire a stoic Icelander to lead them down into the earth. Most of the action takes place underground, with the adventurers suffering several trials, daring risks, and finally discovering a whole new world hidden miles below the earth's crust. The ultimate trial and danger they face consists of returning to the surface.Axel narrates the story, and the strength of the novel lies in his character. The professor and the Icelandic guide are unusual personalities, but Axel is very real and easy to relate to. He really does not want to go in the first place, and he is most liable to greet dangers and risks by bemoaning his fate and declaring his party done for in their foolish efforts. It is he who suffers the most privation when the men's water runs out, and it is he who finds himself lost in the utter blackness of the caverns for three days. When things are going well, though, Axel becomes wildly excited about the mission and temporarily forgets about his fears. This all goes to make him a very sympathetic character. Without him, the story would be a rather dispassionate account of an impossible journey by bland, unbelievable characters. You do have to shift your mind into low gear a few times when the characters begin speaking about the different types of minerals and rocks they are encountering, but overall the plot is rather thrilling, and you cannot help but begin early on trying to ascertain a way in which the intrepid explorers can return to share their discoveries with a skeptical scientific community. Verne knows how to tell a story, and you don't have to know a single thing about science to enjoy this novel immensely.