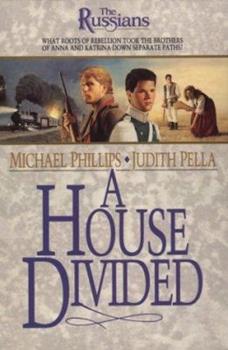 A House Divided (The Russians, Book 2)

(Book #2 in the The Russians Series)

In the turmoil of late nineteenth century Russia, Anna, a servant to the Fedorcenko family, is torn between her love for Prince Sergei Fedorcenko and concern for her brother, Paul, who has joined the revolutionaries trying to overthrow the tsar.

Published by Thriftbooks.com User , 17 years ago
After reading the first book in the series, I rushed to the library to get the second one. I was immediately engrossed in the story of the Burenins and the Fedorcenkos. Prince Sergei returns from the war to Anna, but quickly leaves to try to cope with the terrible things he saw during the war. Anna's brother, Paul, runs away to St. Petersburg and becomes even more involved with the revolutionary cause. Yevno Burenin, Anna's father, becomes ill and she must return to her home in the peasant village of Katyk. Prince Sergei comes to Katyk to help Anna and her family before returning to his home once again. Princess Katrina becomes involved with a dangerous revolutionary, but she will not listen to others who try to warn her of the peril she is in. Another beautifully written book in The Russians series. If you loved the first one, you will definitely love this one just as much if not more!

Pella and Phillips continue to please!

Published by Thriftbooks.com User , 19 years ago
Book two of the Russians series has action, romance, friendship and best of all, an interesting storyline.This series is typically categorized by bookstores as "religious fiction". I will say that there is an underlying message about God (after all religion plays a huge part of Russian history) but it was simply woven into the story subtly and relevantly. I have read other Pella books and found this to be the case with them as well.This book was the start of my infatuation with historical fiction and I am thankful for it. I do recommend all seven in the series with five stars - read them, although it may take a while!

The Series is Still Going Strong!

Published by Thriftbooks.com User , 19 years ago
As you probably guessed after reading my review of the first book in the "Russians" series, I grabbed the second one up as quickly as I could...and I certainly wasn't disappointed. The book begins right where the first one left off, and it quickly presents us with new changes and challenges that the chracters are facing. Prince Sergei and Anna's relationship is a major component of this novel-it is talked about more than it was in the first novel. Paul Burenin, Anna's brother, also takes a much bigger part in this novel, and his revolutionary ideas that had begun to take root in the last novel are now the only causes he's living for. I thought the authors did an excellent job of portraying Paul and his conflicting thoughts about sacrifices for the revolutionary cause, and his anguished wonderings about what lengths he will go to as he fights for change. And Katrina's love life takes a few new turns...but I can't really say anymore. All I can say is that, if anything, the history in this book is more masterfully blended into the story than it was in the last book, and anyone who loved the first book in this series MUST read the second!

One of the best books

Published by Thriftbooks.com User , 21 years ago
I'm only in High School, and I started to read this book just for that, school. But (I didn't realize it was the 2nd book) as soon as I read the first few pages, I knew the book was written perfectly and that I'd love it. The way it is written keeps you tied up in the story, and you never want to put it down! And the characters are so real, you feel as if you know them. It's wonderful! I want to be an author one day, and this is how I hope to write.

Published by Thriftbooks.com User , 22 years ago
This is only the second book in this series and I greatly look forward to reading those which follow. I commend the authors on creating such realistic characters and writing such a capturing book. Before finding this series, I had little interest in Russian history or in books set there. I stumbled across the first book by accident, and found it intreguing. I commend the authors for their excellent character development. The characters are not one dimensional, clearly defined good and evil. While each takes a stand, we are shown the struggle they face as each tries to do what they feel is right. If you haven't read this, try it! It's a wonderful example of a well written and morally sound book. I wish there were more like it.
Copyright © 2020 Thriftbooks.com Terms of Use | Privacy Policy | Do Not Sell My Personal Information | Accessibility Statement
ThriftBooks® and the ThriftBooks® logo are registered trademarks of Thrift Books Global, LLC