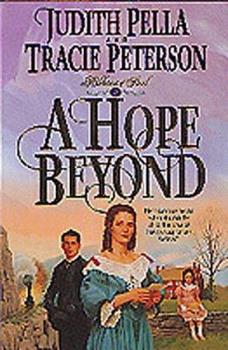 (Book #2 in the Ribbons of Steel Series)

by Judith Pella and Tracie Peterson

Moving to Baltimore to escape the painful situation on her family's plantation, Carolina Adams becomes a nanny to a child whose father is mixed up in Carolina's destiny.

Published by Thriftbooks.com User , 12 years ago
You will want to read Judith Pella & Tracie Peterson's Ribbons of Steel Series first as it is of the parents and then Jordana and Victoria as children in Book 3, although Book 1 of Ribbons of Steel Series was a bit too filled with historical references for me at the time I read it ... I can appreciate it more looking back at it... and I positively loved the series! I have to admit I like this book much more than the first ... where, looking back on the first book, I appreciated the history of the railroad... it was a bit overmuch at the time ... This book is where I really enjoyed what became a series (and will continue with Ribbons West Series as her children grow up). It starts out with her being so heartbroken over James and she goes on to become a nanny to a very wealthy man. She falls in love ... not with the man, but with the daughter ... Victoria. She never forgets James, and James never forgets her ... it is obvious it was true love and Virginia has managed to really land herself into hard times by her own selfish actions. Of course, by the end ... things do some twists and turns but it ends with one feeling very good about the end of the book. However, I am ever so glad that I did not read this book back when it was first printed as I felt that it ended fairly abruptly ... I was ever so glad that the 3rd book in the series was just being published and I had preordered it and was anxiously awaiting its arrival, which nicely arrived as I completed this second book.

slow moving but a good book

Published by Thriftbooks.com User , 12 years ago
I love the details of the oppulence before Civil War. moves very slow but good story and entertaining

Published by Thriftbooks.com User , 12 years ago
This is a wonderful series.......could hardly put the books down!! This series has all the elements......excitement, danger, romance and all with a wonderful christian message...

More interesting than the first book in the series

Published by Thriftbooks.com User , 20 years ago
At the end of "Distant Dreams," James Baldwin left Oakbridge after leaving a note for Virginia Adams, saying he couldn't marry her because he wanted to go west and giving her the chance to publicly break their engagement to avoid the disgrace of being "jilted." Virginia blamed her younger sister for encouraging James along these lines, when the truth is that James and Carolina had fallen in love but did not dare admit it to each other. Carolina is being encouraged to marry Hampton Cabot, her father's overseer, but he is actually scheming to take over Oakbridge and enjoys mistreating slaves. Virginia, not knowing that Carolina really doesn't care for Hampton, decides to get even with her and seduces Hampton, and elopes with him. Having no reason to stay at Oakbridge, Carolina moves to Baltimore to become a nanny for a little girl whose father doesn't want anything to do with her. When the father decides to permanently go away, he has a surprising proposal that Carolina must accept to determine the fate of his daughter. You MUST read the book for the surprising ending to this story!

Published by Thriftbooks.com User , 23 years ago
I enjoyed this book because of the complexity of the characters, the simple words, and the over-all simple flow of the plot. I could easily relate to all the characters and saw a little of myself in each. This book comes highly recommended!
Trustpilot
Copyright © 2022 Thriftbooks.com Terms of Use | Privacy Policy | Do Not Sell or Share My Personal Information | Accessibility Statement
ThriftBooks® and the ThriftBooks® logo are registered trademarks of Thrift Books Global, LLC