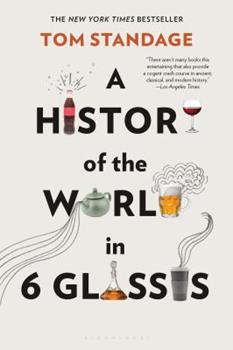 A History of the World in 6 Glasses

The New York Times Bestseller "There aren't many books this entertaining that also provide a cogent crash course in ancient, classical and modern history." --Los Angeles Times Beer, wine, spirits, coffee, tea, and Coca-Cola: In Tom Standage's deft, innovative account of world history, these six beverages turn out to be much more than just ways to quench thirst. They also represent six eras that span the course of civilization--from the adoption of...

Eye-Opening Glimpses Into How Beverages Shaped Eras and Cultures

Published by Jgoebel , 2 years ago
I had never considered the significance of beverages in world history. This book peppers you with fun facts to bedazzle your friends with and gives you a lot of insight into how coffee, tea etc. shaped the world we live in today. It is well-researched and entertaining to read as well. I highly recommend this book for anybody who wants a surface dive into cultures throughout history and how drinks influenced them.

Published by Thriftbooks.com User , 16 years ago
This book is evidence of the power of a good idea to organize one's thoughts and arguments so as to make them compelling. Other than the air we breathe, which hasn't really changed all that much over the years, there is nothing so universally important as liquid refreshment. Mr. Standage's decision to structure his history of the world upon beverages is brilliant. It is precisely because the drinks discussed remain so familiar to us that the history is so relevant and interesting. Though we understand quite well why alcohol has such a prominent place in history, who would have thought that water itself is only now just emerging as the drink of choice? or that the antibacterial properties of Tea supported the industrial revolution. True, the bias is towards Western history--but as that is my history, I'll take it. We are surrounded with objects that we take for granted and there are any number of great books that spin the historical tale around such objects; however, this work excels because of its brevity--the author manages to cover the topic without the pace of the book ever lagging. The lawyer in me appreciates a finely honed argument; Standage's book is so good that he makes the supremely difficult job of summarizing world history look easy. Many authors of history are unable to prune the many fascinating insights that history presents. And to be sure, I enjoy a nice meandering presentation of interesting tidbits organized around a central theme, but it is always refreshing to find a history that has the same "can't put down" type of feel as a thriller or mystery. I can't think of a more excellent example of a history that is both appropriate for a younger student as well as an overeducated adult. Highest Recommendation.

Published by Thriftbooks.com User , 17 years ago
Breathing is essential, but the air is free and no one has found a way to make it special enough that people will pay for the privilege, unless you count the hits of pure oxygen that some favor. Eating is essential, and of course there are countless ways that the activity has been turned into a trade. Between them, as far as the body's needs go, is drinking, that is, drinking water, and while there is a pretty good trade in more-or-less pure water, it's the stuff that is added to water that has changed history. Or, at least, that is the view of Tom Standage in the sprightly _A History of the World in 6 Glasses_ (Walker & Company). An overview of world history that is based on what people imbibe might seem to be a theme too narrow to tell us much, but this enjoyably breezy overview looks into science and culture through the millennia and shows that humans took a physiologic necessity and used it to shape the ancient, classical, and modern worlds. Beer, for instance, gave us history itself. The workers who built the pyramids were paid in beer, and Egyptians would greet each other with the phrase "Bread and beer," a genial wish for prosperity. The pictures of Egyptians enjoying their beer show them doing it together, using straws communally inserted into a big jar of beer; using straws kept the floating stuff at the top from being ingested. Wine, by contrast, was the drink of the elite ever since it spread through ancient Greece. It is remarkable that thousands of years later, though the categories have merged somewhat, beer has remained the working man's everyday drink while wine has remained an exotic, fit for connoisseurship and social differentiation. Rum was "The world's first global drink" and a key part of the slave trade as well as of the American drive to independence. George Washington eventually distilled whiskey at Mount Vernon, but when he campaigned for the House of Burgesses in 1738, he distributed, besides wine and cider, twenty-eight gallons of rum and fifty of rum punch. This went to a county with only 391 voters. The use of coffee took off in European coffeehouses, and the tradition of coffee being a thinking beverage continues; we have Internet cafés rather than internet bars. Tea was a perfect drink for sober, productive attendants of the machines that powered the industrial revolution, and tea breaks were part of the job. Coca-Cola was sold until 1865 as a medical elixir, but since not everyone is ill but everyone gets thirsty, it was thereafter marketed as a drink, not a drug. Coke was an all-American drink and the harbinger of the consumerism of globalization, largely due to its participation in World War II. Soldiers all over the world wanted this liquid bit of home while they were overseas, and the Coca-Cola company was happy to oblige them, especially since it got an exemption from sugar rationing as a product essential to the war effort. The soldiers eventually came back home, but the company continu

Read this one for fun and your next cocktail party

Published by Thriftbooks.com User , 17 years ago
Do you ever wonder where some people find the most interesting things to say at parties -- like how tea aided longevity in China or raised life expectancy in Europe ? Well it is this kind of book that drives that knowledge. Standage has created a very enjoyable, brisk read that is definately for fun and to load up on fun facts. By telling the world's history in six glasses (see below) Standage covers alot of ground and sure he misses alot, but its still fun non-the less. 1) Beer -- a basis for why people replaced hunting with farming 2) Wine -- the civilizer of Greece and Rome 3) Hard Spirits -- slavery, the American Revolution 4) Tea -- the life sustainer and improver 5) Coffee -- the fuel for the enlightenment 6) Cola -- particularly Coca-cola the expression of cultural dominance. Sure you have heard some of these stories before, but this book presents history in a fun and entertaining light. So when you go to order your next beer know that you are engaging in high civilization even in a sports bar.

A New View into History

Published by Thriftbooks.com User , 17 years ago
What can you say except, "I'll drink to that." As I first started looking at this book I was reminded of James Burke and his 'Connections.' Like Burke, Mr. Standage looks at the six (well maybe seven) drinks that basically were a technology that changed history. To illustrate this I'll talk about only one of his drinks -- Beer. Beer probably began as some leftover cooked grain, perhaps the kids morning cereal, was left outside in the rain. Soaking in water, it turned into malt. Wild yeast fell into the mix, and in a few days the result was beer. While I'd bet it was foul tasting beer, it was the only alcoholic beverage around. OK, so you have beer, how does this mean anything? Well, to get more beer, you need more grain. To get more grain you basically move from being a hunter-gatherer to a farmer. You also need the ancillary technologies of pottery to make and store the product. If you have beer, and your neighbors have food, perhaps you can make a trade. Expand on this and you have a need for writing, for record keeping, for accounting. And with accounting can the tax people be far behind? And that's not all. No pathogen lives through the brewing process, so all of a sudden you have a beverage that's safe to drink, cutting down on illnesses. Think about all that the next time you sip a brew. Surprisingly, a lot of the glasses Mr. Standage talks about have this same factor of sterilizing the water, thereby cutting down on disease. A delightful book, now if we can only get it made into a TV series.
Trustpilot
Copyright © 2022 Thriftbooks.com Terms of Use | Privacy Policy | Do Not Sell My Personal Information | Cookie Preferences | Accessibility Statement
ThriftBooks® and the ThriftBooks® logo are registered trademarks of Thrift Books Global, LLC