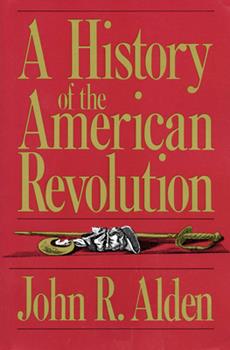 A History of the American Revolution

The history of the American rebellion against England, written by one of America's preeminent eighteenth-century historians, differs from many views of the Revolution. It is not colored by excessive worship of the Founding Fathers but, instead, permeated by sympathy for all those involved in the conflict. Alden has taken advantage of recent scholarship that has altered opinions about George III and Lord North. But most of all this is a balanced history--political,...

good, but woefully defecient of the Southern campaign

Published by Thriftbooks.com User , 21 years ago
The opening is breath taking in its writing. Alden's expose of the conditions of the British Empire and the Colonies is insightful and poetic. It is a hard book to put down and yet its brevity still somehow does not deprive the reader of a full account of the war and much of its politics, and yet. . .Alden's depictions of the Southern campaign are really lacking. This is so typical, this Yankee bias, that it fails to rile me up anymore. But to write many more pages of the Boston tea party and Lexington-n-Concord versus the events in Charleston, like the first true Patriot victory is shameful. To sketch the magnificient victories of Kings Mountain,and Cowpens and the defeat at Camden, along with the guerilla warfare of Marion and Sumter and Pickens and MUCH, MUCH more at a fraction of the space to the defeat at Quebec and the tie at Bunker Hill is typical Yankee chauvinism. And don't forget Cornwallis came from South Carolina to Virginia, all in the South, where he surrendered to the Southerner Gen. Washington effectively ending the war. Yes read this book, it is good. But read some other books about the more turbulant South, so that you can really get a full account of the pressure points. I suggest The Battleground of Freedom by Hilborn--great maps and photos of the battlefields et. I hope it is still in print or can be found. Also a famous one that I have not yet read is The Road to Yorktown--can't vouch for that one though. A bio of Francis Marion is a MUST. There are several, but I can't recomend one because I have not read the perfect one yet. The heroes and heroines of the first War for Independence make for endless interesting reading and inspiration, but the Yankee slant from NY publishing houses shows that we do live in two defacto countries, and it makes one wish that we would have won the second War for Independence too. Oh well, there is always tomorrow to free the South from the Yankee Empire as was done with the British Empire. In fact I often amuse myself by reading the Declararion of Independence in a Southern vein as in 1860 and as in now: "When in the course of human Events, it becomes necessary to dissolve the Political Bands which connect them--" You get the picture.

Published by Thriftbooks.com User , 21 years ago
This is an excellent book on the american revolution. The book is just superb and I would recommend it for anyone who wants to learn more about this most important event in American history.

Published by Thriftbooks.com User , 22 years ago
I didn't know very much about the Revolutionary War before I read this book. After reading it, I feel like I at least have a reasonable understanding of the military, political and social aspects of this conflict. It is important to point out that although Alden does cover the military campaigns in reasonable detail, this is by no means strictly a military history. Alden also spends much time discussing all of the political developments that occurred during the period of 1763-1789, both in America and England. He also spends some time discussing social issues, such as religion and slavery. Alden implies that the reason the United States became such a rich, powerful nation is that, unlike in England, in the U.S. it was possible for someone who is born relatively poor to become rich and powerful provided that they have the talent and they work hard. England, as well as all the other European powers of that time, was hampered by incompetent business, political and military leaders who received their positions because they were born into prominent families. The United States also became powerful due to the excellent political structure that was created by the Constitution. But I digress. Overall, I think that all Americans can be proud of the men who fought for our independence and had the courage to adopt a very inovative form of government (although, of course, there were some bad apples amoung them, such as Benedict Arnold). In sum, although this book is certainly no thriller, I found it to be very readable and full of interesting information.

Anexcellent, well balanced view of the the Revolution

Published by Thriftbooks.com User , 23 years ago
I found the book excellent to begin my research into the Revolution and found it to be fair and balanced for both sides.Having amajor in Us History and needing a book for History: Revolutions, Alden was a treasure to have stumbled upon.

Published by Thriftbooks.com User , 23 years ago
This is not a review, but I thought you should know that you seem to advertise the list price at $10.95 and your price at $15.16.MMT critique@umich.edu
Trustpilot
Copyright © 2022 Thriftbooks.com Terms of Use | Privacy Policy | Do Not Sell My Personal Information | Cookie Preferences | Accessibility Statement
ThriftBooks® and the ThriftBooks® logo are registered trademarks of Thrift Books Global, LLC