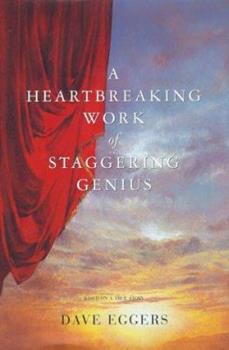 A Heartbreaking Work of Staggering Genius

"This is a beautifully ragged, laugh-out-loud funny and utterly unforgettable book." -- San Francisco Chronicle National Bestseller Pulitzer Prize Finalist A book that redefines both family and... This description may be from another edition of this product.

Perhaps the funniest book I have ever encountered!

Published by Thriftbooks.com User , 22 years ago
This novel is at times remarkably heartbreaking and amazingly entertaining. Along with 'Catch 22', this is undoubtedly one of the most humourous pieces I am have read, and certainly one of 2000's finest reads for me.I can see how some would argue that Eggers loses some of the genius in his own attempts to be funny, and the contrived nature of the piece, but I believe it's humourous value far outways the self absorbed nature of the writer. Contrived or not, it's merit as a witty novel by a wonderfully talented upcoming writer can not be argued.Of course, he is self absorbed, to the point our sympathy wavers, but I imagine losing two parents and being left to care for your younger brother, all in the space of five short weeks calls for a bit of excessive sympathy and wallowing. On the whole, 'A heartbreaking work of staggering genius' is often heartbreaking and staggering, but at all times hilarious. Well worth the little self indulgences of the talented author.

Good Enough To Warrant A Backlash

Published by Thriftbooks.com User , 22 years ago
Clearly this book isn't for everyone. It's incredibly self-reflexive. It's more than willing to employ a device while simultaneously satirizing it. Eggers, as described in his own words, is rarely likeable, noble, humble, or charming. Instead, he's self-indulgent, arrogant, and so full of neurosis that Woody Allen looks calm and confident in comparison.And while these factors will elicit cries of how overrated the work is, I find them the fuel behind what is a darkly compelling fever dream. Eggers takes the theme of being consumed (by cancer, by being young and wanting to make a mark on the world, by the responsibility of raising a child while maintaining friendships) and exposes its results in a harsh light. And it's angry and difficult and ... well ... real.Far different and more challenging than the back-patting, self-congratulatory, "Gee, aren't I a strong and admirable person for surviving these tribulations?" tone that fills most stories of this genre. I congratulate him on avoiding making things neat and tidy. The result is an astonishing, staggering, and, ultimately, heartbreaking work.

An accurate and disturbing desciption of life in Lake Forest

Published by Thriftbooks.com User , 22 years ago
First a little background. When my husband and I had only lived in Lake Forest a couple of years, I heard about the deaths, within a month or so, of the parents of a young boy in the neighborhood. Both died of cancer and the boy was the only one left at home. He had 3 older siblings that were all out of high school and either away at college or ensconced in careers. I didn't know the family at all, but I was devastated by the news (I had only a toddler and a baby at the time) Over the next year I asked people I knew what happened to the boy. Even those who knew the family had lost touch. I thought that was terrible and never forgot it all these years. My reaction when I first heard of this book was "A-HA! I know who this is! " It's absolutely one of the best memoirs I have ever read. What is most striking is the description of our white-bread upper class town. It is right on the money. (though I'm sure most Lake Foresters will be highly offended) But as a minority in that town (working mom and Catholic to boot), I applaud Dave Eggers for exposing himself and us. And I want to be the first from Lake Forest to highly recommend this funny, heartbreaking, ironic and highly introspective book.Funny thing is, I've mentioned the book to a few people who knew the family and NO ONE knows about it. You can bet if a local became a movie star or a prominant (Republican) politician, he or she would be a major local celebrity and everyone would claim to know them.Oh, well, I'll get off my soap box now. Please don't use my name--I still live in this town.

Pace yourself...you'll be sorry when it's over!

Published by Thriftbooks.com User , 23 years ago
I can't express how much I love this book. The acknowledgements alone were enough to win me over. As much as I hate the cliche I'm about to use, Dave Eggers is wise WAY beyond his years. He mixes the most tragic emotional events with a perfect punch of sarcasm and self deprecation. Overall, the book is impossible to do justice to with a measly "review". So I realize perhaps I'm not being helpful. Sorry. But here are two possibly helpful tidbits: I'm a big fan of David Sedaris, using him every semester in creative nonfiction writing classes, and I think Eggers' book may be the required text next semester; also, I read this book during a three day bout with the new and improved Killer Flu, and though my energy level was that of a banana slug, I could not stop reading. I wish I could induce aphasia and read it fresh.
Trustpilot
Copyright © 2022 Thriftbooks.com Terms of Use | Privacy Policy | Do Not Sell My Personal Information | Cookie Preferences | Accessibility Statement
ThriftBooks® and the ThriftBooks® logo are registered trademarks of Thrift Books Global, LLC