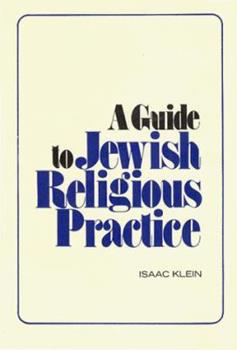 A Guide to Jewish Religious Practice

An extensive treatment of the laws determining customary Jewish practices is presented in light of religious sources and the Conservative movement and concerns such areas as marriage, holidays and... This description may be from another edition of this product.

Published by Thriftbooks.com User , 15 years ago
This well-written work succinctly provides a plethora of Jewish religious practices, addressing differences among: American/Israeli, Ashkenazi/Sephardi, & (at least to a degree) Conservative-Masorti/Orthodox Jews. It includes an Appendix/Supplement by R. Joel Roth explaining the practices for modification of Conservative Jewish normative laws (e.g. the Committee on Jewish Law and Standards) and providing updates to the main text since its publication. The text follows the tradition of Maimonides' Mishneh Torah & Joseph Caro's Shulkhan Arukh in its contents & the Rama [R. Moses Isserles, 1510-72] in its presentation--p. xxv: "Isserles added the practices that obtained in the Eastern Europe of his era, & I have added the practices that obtain in the present-day Conservative synagogue." Klein gives differing interpretations from major sources as well as past & present common practices--including superstitions. I read it cover-to-cover & enjoyed it thoroughly. However, it does not address spiritual practices [see Buxbaum's "Jewish Spiritual Practices" ASIN: 0876688326], & has the normative extroverted bias, e.g. saying public prayer is "conducive to greater solemnity & exaltation." Mystics would heartily disagree IMHO. It also has some unusual spellings--e.g. Qaddish vs. Kaddish. There is a marking error on the top right of pp. 41-52: "Daily Prayer" should be "Blessings for Various Occasions." But, these are all minor annoyances considering the overall loveliness/value of the book. The only major criticism is that many words/phrases are given in Hebrew without good/consistent transliteration, & no glossary is provided. Klein provides some valuable observations worth mentioning: p. 39: "The highest test of a person's faith is his ability to praise God at the moment of grief, p. 46: It is easier to reinterpret than to abolish, p. 127: Eating performed in the right spirit becomes an act of worship," & p. 293: Twelve months was also regarded as the maximum period of punishment for the wicked in the heavenly courts." He also adds realism to tradition: p. 78: In the Talmud, a massive edifice--called by the sages `like mountains hanging by a hair' ...is built on the prohibition of work. Most interesting to me is his story of the bereaved woman & the saint (p. 287) who sends her to find wheat in houses without bereavement. This is virtually identical to a famous, standard story of the Buddha!

Published by Thriftbooks.com User , 20 years ago
This book, by the late Rabbi Isaac Klein, of blessed memory, is the only fairly comprehensive guide to Jewish religious practice issued by the Conservative movement. As such, it is an indispensable reference to the practicing Jew. Readers will find that their is, in fact, very little difference between the modern Orthodox Halachah and that set forth by the Conservative movement's Rabbinical Assembly. The difference is, of course, in the theological approach.Rabbi Klein's book,which has been updated and supplemented a number of times to reflect changes since its publication in 1979, is a good source for the torah, talmudic and traditional approaches to all areas of Jewish practice. The book includes one of the most comprehensive approaches to the Kosher laws I have ever seen. It also covers synagogue practice in great detail, differentiating between laws (halachah) and customs which have taken on the effect of laws. (minhag) I myself pick up the book for review whenever necessary, for example, reviewing the section on brit milah (the circumcision) after my son's birth. This is not a book for beginners who have no familiarity with Jewish practice. It is a good stepping stone for the beginner who would like to have more comprehensive knowledge and understanding of Jewish practice. I learned more in this book than in six years of Hebrew School. For the beginner or for someone looking for a much easier book of this nature I recommend Rabbi Kotlach's "Jewish Home Advisor". For someone looking for a more comprehensive work and not ready to tackle the Shulchan Aroch, this is a wonderful resource.

Perhaps the most accessible Jewish law guide ever

Published by Thriftbooks.com User , 25 years ago
No matter what one's level of observance, every Jew should have a book of Jewish law and practice in their home. Having such a guide is essential for all Conservative and Orthodox Jews. Even though Reform Judaism teaches that halakha (Jewish law) is not binding, it also teaches that it is incumbent upon Reform Jews to make themselves very familiar with the laws, customs and traditions, in order to make an informed choice. Most Orthodox guides to Jewish law are written in Hebrew; the complete guides in English are usually multi-volume sets that would cost many hundreds of dollars to complete. Fortunately, most people have no need of such complete guides to law. Published by the Conservative movement, "A Guide to Jewish Religious Practice" is the answer for most American Jews. It is based firmly upon previous works, including the Mishneh Torah, Shulkhan Arukh, and later rulings by Conservative and Orthodox authorities. It is more than a list of do's and don'ts: Each chapter discusses the philosophy, history and the reasons why these laws and customs came to be. This guide covers daily prayer, tallit & tzitzit, tefillin, weddings, births, adoption, divorce, bar and bat miztvahs, death and mourning, the High Holy Days, the Jewish festivals and fast days, Shabbat, keeping kosher, the laws of family purity, the role of women in Judaism, abortion and other topics. A great job, and highly readable. [Note that some of the sections on keeping kosher have ultra-detailed sections, which many people might just want to skip.]
Trustpilot
Copyright © 2022 Thriftbooks.com Terms of Use | Privacy Policy | Do Not Sell My Personal Information | Cookie Preferences | Accessibility Statement
ThriftBooks® and the ThriftBooks® logo are registered trademarks of Thrift Books Global, LLC