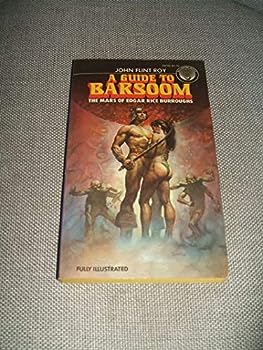 A Guide to Barsoom

This description may be from another edition of this product. THE OFFICIAL, DEFINITIVE GUIDE TO BARSOOM AND THE WORLD OF JOHN CARTER OF MARS **Fully Illustrated** COME TO BARSOOM... AND ENJOY THE WONDERS OF ERB'S MARS When Edgar Rice Burroughs (1875-1950) wrote...

Published by Thriftbooks.com User , 12 years ago
My paperback copy of this book dates from 1980 and has a Michael Whelan cover that I think might be taken from one of the Burroughs books. The book looks to be out-of-print now, but I don't know that it's been superseded by anything better and you can easily get it used cheaply here or elsewhere. The book is organized into several chapters, each of them offering a guide to various aspects of the Barsoomian world created by Edgar Rice Burroughs in 11 books published from 1912-64, and all previously published in magazine form. I think the chapter format works fairly well, given the small paperback edition that I believe is the only way this book was published, though I tend to usually prefer a strict alphabetical "encyclopedic" format in such exercises. In any case, the chapters are: I - A Brief History of pre-Carter Barsoom II - A Geography of Barsoom III - A Biography of Barsoom IV - The Flora and Fauna of Barsoom V - Measurements on Barsoom VI - The Languages, Religions and Customs of Barsoom VII - A General Barsoomian Glossary VIII - Quotations, Proverbs and Expletives IX - Barsoomian Science and Invention X - Through Space to Barsoom? XI - "Edgar Rice Burroughs": A Brief Biographical Space There are maps in sections II, though they are just simple hemispherical ones with little detail, and aren't well reproduced and are too small to be terribly useful. Similarly the illustrations scattered throughout by Neal MacDonald are really lovely, but just don't come off well in this format. I would have liked to see a chronology of the events in the books included in section I. Section XI is a bio of the "Edgar Rice Burroughs" to whom most of the stories in the books are told, with asides about his activities involving Tarzan, David Innes, Carson Napier, etc. It's rather amusing (the "real" Burroughs of the books is last heard from in 1969 at the age of 114!) and puts one to mind of Philip Jose Farmer's "Wold Newton" concept, stitching together all kinds of fictional characters with vast lifespans into one consistent literary universe. The other sections are all reasonably complete, I think; few if any characters or concepts of any importance in the series aren't touched on. On the whole then, small problems in part having to do with the cheapness of the mass-market paperback production aside, a valuable book for all Barsoomian fanatics and Burroughsians.

Useful for fans, not canon, recommended

Published by Thriftbooks.com User , 14 years ago
This is actually a good resource, even if Roy does sometimes neglect to tell us when he's straying from canon and sticking his own stuff in (i.e., the Barsoomians are oviporous due to bioengineering). Not that his own stuff is bad (I could accept bioengineering), but it IS his, not Burroughs'. Still, it is the one place you can find pretty much all the nit-picky, only-fans-would-care stuff in one place. And of course, as a fan, I do care about that stuff. Now, if Den Valdron would only collect HIS stuff into a book and publish it...

A reference guide to the Martian Tales of E.R.Burroughs.

Published by Thriftbooks.com User , 23 years ago
The Martian Tales of Edgar Rice Burroughs have been an insperation to countless of highly imaginitive people. This guide gives you a more detailed view into the complex world and society E.R.B. created. It gives you understanding of Barsoomian words, customs, history, landscape, fauna and flora, transportation, army and civil ranks and thoughts. If you are an E.R.B. fan this is the guide to his Martian Tales.
Copyright © 2020 Thriftbooks.com Terms of Use | Privacy Policy | Do Not Sell My Personal Information | Accessibility Statement
ThriftBooks® and the ThriftBooks® logo are registered trademarks of Thrift Books Global, LLC