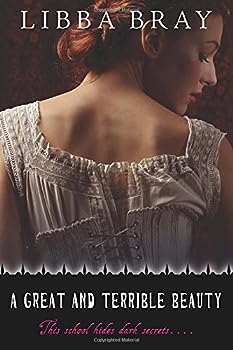 A Great and Terrible Beauty (The Gemma Doyle Trilogy)

(Book #1 in the Gemma Doyle Series)

This description may be from another edition of this product. The first book in the critically acclaimed New York Times, USA Today , and Publishers Weekly bestselling Gemma Doyle trilogy, the exhilarating and haunting saga from the author of The Diviners series...

Published by Mistress Alfredo , 2 months ago
I love Libba Bray as an author and cannot wait to read this series after loving The Diviners. This was in great condition shipped really fast and was really low priced.

Published by haley , 1 year ago
the setting by itself, a boarding school in victorian england was fantasizing. all of the characters were so well-developed. the plot as well, the beginning events foreshadow so many things. it’s incredible. i adore this book.

Published by Thriftbooks.com User , 16 years ago
i really loved this book. it was really descriptive and the characters seemed as though they were actually real. i did, though, have to read the book twice to fully understand everything, but it was still SUPER amazing. it's basically the story of gemma doyle, a girl who has no idea she has secret visions and the power to enter mysterious realms. but after ariving in england after her mother's death and attending a finishing school, she realizes her powers are greater than ever. there she befriends three girls, pippa, felicity, and ann, and after some confusion and disagreements they become best friends. but gemma's not alone to knowing of her visions, an indian boy who has followed her knows of them too and is trying to stop her from entering the realms and using her powers. his name is kartik. she feels as though he's ruling over her, telling her what to do. she does not listen to him and enters the realms, a place of the dead, where she remeets her mother and she introduced her friends and such. but soon her paradise becomes deadly and full of confusion as gemma realizes her mother's real idenity, she is in risk of becoming a 'dark thing,' and she realizes that kartik was right. it's basically her story of finding herselef and understanding herself in the world. i loved this book, it's a must-read. i really loved the characters and they were so well-formed. i adore this book. the only things wrong with it are that it can become confusing & i was disappointed that kartik and gemma didn't become really close and fall in love or something. but it was still an amazing book. i can't wait to read rebel angels, the next book in the series. enjoy!

Published by Thriftbooks.com User , 16 years ago
I picked up this book on a whim because the premise seemed interesting. A Great and Terrible Beauty is one of the most beautiful historical and gothic novels I have read in a while. The story enthralled me from beginning to end. Sixteen-year-old Gemma Doyle is different from the other girls at the London boarding school she lives in after her mother's tragic and strange death in India. In addition to not having the conformist mentality that girls of her class and station are trained to have, Gemma has a deep, dark problem that she does not know how to control. She has visions of tragic things that come true and has the magic key to enter an alternate place called the Realms, where every desire -- as well as every nightmare -- can come true. When she finds the diary of a girl with similar powers, she learns about a secret society called the Order, and she and three friends decide to explore the magical and strange world. But there are things that Gemma doesn't know about, secrets and mysteries that she will have to figure out on her own. And she tries to do this while a rather strange Indian boy keeps an eye on her and demands that she put a stop to her visions. There are various twists throughout the novel. A Great and Terrible Beauty is the sort of novel that you cannot put down because there are so many elements, so many layers that make the novel compelling and enthralling. I loved the backdrop of Victorian England and the way women were viewed and what was expected from them in those times. The female characters spoke volumes about this particularly difficult time period for women. Pippa's desire to meet the perfect prince touched me. She is a very flawed character, but with dreams and desires that spoke to me. Felicity is also quite a complex character. She was a loyal friend and an innocent at times and was cruel, despicable and disturbing in others. Gemma is a great heroine. She had the sort of confusions and issues that girls at present time could definitely relate to. There was a naivete quality to her voice that made her all the more compelling. The gothic aspect of the novel is the perfect complement for the time setting. The horror aspect of the novel were chilling at times. The story became very fanciful about halfway through the novel, but the elements of magic in those scenes were very well done. I fell in love with this book and Libba Bray seems quite an interesting author (an interview with Ms. Bray is included in the book). There are loose ends that tell me there will be a second novel. I hope this turns into a series. It is too good for it to be a one-time story. I recommend A Great and Terrible Beauty most highly. This novel is one of the best reading investments I've made thus far this year!

Published by Thriftbooks.com User , 16 years ago
This book was compelling and mysterious... definetly a great book! The characters were so real and the setting was so elaborate! It took me exactly a day to read this book(i read it in 4 of my classes...) I just couldn't put it down! I highly reccomend this book, as it sits up at the top of my favorites list including the Abarat and Harry Potter books. I look forward to any more books by this author

Published by Thriftbooks.com User , 16 years ago
A great book that I couldn't put down from start to finish. I was even caught reading it in one of my classes it was so good. I picked it up at first thinking it was a historical fiction, the type of book I normally read, because it is set in the 1800's. And while it did have the essence of the past with girls wearing petticoats and being engaged to 40 year old men at 16 (yuck!) it was mainly about the struggles of Gemma and controling her new found power while trying to uncover a mystery. So if you like historical fiction, fantasy, drama or a good mystery book with a touch of romance, that also captures the reader from page 1, this book is for you. I highly recommend it.

A Great Book...And Certainly Not Terrible

Published by Thriftbooks.com User , 17 years ago
"Wow!" was all I could say after reading this book. I was awed by the characters, the setting and the lyracisim of the story, which seemed so believable despite its fantastical plot. The book centers around Gemma Doyle, a 16-year-old British teen living in India during the late 1800's. Anxious to go live in London, Gemma is miserable in this foreign land, to say the least. When her mother dies mysteriously, Gemma is sent to an English boarding school, Spence, to finish her education.But trouble doesn't stop there. Gemma is haunted by mysterious visions, where she sees her mother, a young girl and a myserious beast. At the same time, she must attempt to assimilate into the elite Spence society. Later, Gemma uncovers the diary of Mary Dowd, which unleases the story of the Order, an old Spence society, no longer existing, that was comprised of girls who traveled to other realms and the spirit world. In addition, the secrets of Mary's death, and her friend Sarah's, are unraveled. When one of Gemma's new friends decides to reinstate the Order, Gemma and two others join her. But this coming-of-age heroine will quickly discover that all is not as it seems...and someone (something?) is after her. This is an incredible story. It is well-written and captivating. The characters, especially Gemma's friend Felicity, literally seem to step off the pages and enter our world. But what really sets this book apart from any others is the way that Libba Bray has woven a sharp analysis of Victorian society into a gripping fictional tale. A Great and Terrible Beauty is a must-read that will stick with young adult readers long after the last page has been turned.
Copyright © 2020 Thriftbooks.com Terms of Use | Privacy Policy | Do Not Sell My Personal Information | Accessibility Statement
ThriftBooks® and the ThriftBooks® logo are registered trademarks of Thrift Books Global, LLC