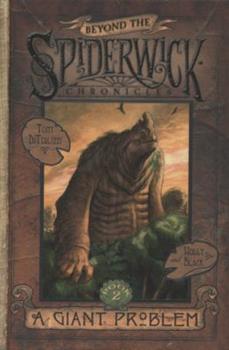 A Giant Problem (Beyond the Spiderwick Chronicles)

(Book #2 in the Beyond the Spiderwick Chronicles Series)

by Holly Black and Tony DiTerlizzi

This description may be from another edition of this product. Talk about out of the frying pan, into the fire I was pretty sure that my freaky stepsister and that freaky field guide of hers would ruin my life. But now it looks like they're going to ruin all of...

Published by Thriftbooks.com User , 12 years ago
Nicholas Vargas and his step sister Laurie have a giant problem - literally. Giants are on the loose and threatening to destroy Florida. Noseeum Jack is coaching them on how to kill the giants and their brother Jules and his girlfriend Cindy will help them, but it is still a daunting task. On top of that, their newlywed parents (Nick's father and Laurie's Mother) seem to be fighting all the time. Whatever happened to the nice, quiet summer vacation Nick had planned? "A Giant Problem" is the nicely done second book in the "Beyond the Spiderwick Chronicles" series by Tony DiTerlizzi and Holly Black (the first book is The Nixie's Song (Beyond The Spiderwick Chronicles, Book 1)). So far DiTerlizzi and Black have managed to capture the same wonder and fantasy of the first Spiderwick Chronicle series. Nick and Laurie are good creations - adjusting to life together as brother and sister while also trying to fight the giants. There aren't too many fantastical creatures in this book - mostly just the giants and mermaids - but the fantasy elements are well done and there are some genuinely thrilling moments in the book, especially toward the end. What is really well done are the "real" elements in the book - a newly blended family trying to adjust to life together. The tension between Nick's father and Laurie's mother is very realistic. It is also nice to see more of Jule's character in this book and he leaves some clues that will no doubt be answered in the third book which is the final book in the series. The book ends on a cliffhanger that will have readers eagerly waiting for the next book to find out what happens to the Vargas children (and some familiar friends). "A Giant Problem" is a wonderful fantasy book for readers young and old.

Entertainment for Kids of All Ages

Published by Thriftbooks.com User , 12 years ago
There was a collection of Mark Twain books my grandmother owned that I absolutely loved. Not only the wondrous stories, but the countless illustrations, the heavy gauge paper on which it was printed, as well as the gold inlaid title lettering and binding. Funny to think you can fall in love with inanimate objects, but we humans do it all the time. I must say the boy inside me is placated once again when I pick up this book. It is a small book in size but, obviously, is a labor of love from the embossed, cleverly designed cover to the pages that are heavy and uneven and appeared hewed, giving it a hand-made appearance. Illustrations abound embellishing the story in all aspects. The two main characters, Nick and Laurie, are off on further adventures to stop the coming onslaught of giants attempting to destroy whole of the state of Florida by fire. A daunting task for two kids indeed and you will have to purchase this book to see if they succeed. The little boy inside me is whispering right now and he is prodding me to purchase the other books in the series to read and appreciate. I will never again get to hold and admire the books my Grandmother owned, but, in a sense, I hold in my possession something equal in gratification and excitement and wonderment. Something all our inner children need. Reviewed by Lee Crawford

Much better than the first one, no worries for parents (probably!)

Published by Thriftbooks.com User , 12 years ago
In The Nixie's Song I was terribly disppointed with some gutter language used by the authors, which did nothing to advance the story. I was pretty much ready to punt on Spiderwick, but the art by Mr. DiTerlizzi is so good and my sons were so excited to see the new book that I had to relent. I am very pleased to report that there is no objectionable language in this book! There are no distractions from the beautiful illustrations, or Ms. Black's plotting. I will leave the plot summary to other reviewers but my 9 and 10 year old sons found it to be very exciting and intense during our nightly reading. I think they also like the fact that the illustrations are very different than the usual manga they are absorbed by. Are there any warnings for parents? Well, maybe. Some of the giants kill each other. One of the big plot events involves outright deception of a character's parents and theft of a prized tropical fish. On the other hand, all of the young protagonists know they are doing a wrong to achieve a greater good and know they will have to face consequences. The family also has to deal with the destruction of their home and livelihood, and face issues of trust in newly married step-parents, but I thought these were more in the backdrop and presented with great care. There is nothing not to like! Our family eagerly awaits the next volume.

Published by Thriftbooks.com User , 13 years ago
Love a Giant Problem the next book in the continuing series of Spiderwick Chronicles. This is one book series that both my 9 yo and I can enjoy together. Great plot line complimented by beautiful, detailed illustrations.

Published by Thriftbooks.com User , 13 years ago
The continuing saga and just as good as the original Spiderwick series. We always sign up as soon as these series are available for our grandson, who loves them. Since we originally were stationed in Florida, we miss it and this book also captures the essence of the way Florida used to be. This is another excellent book for young people, so much better than other currently available series for this age. My wife and I enjoy it too.
Copyright © 2020 Thriftbooks.com Terms of Use | Privacy Policy | Do Not Sell My Personal Information | Accessibility Statement
ThriftBooks® and the ThriftBooks® logo are registered trademarks of Thrift Books Global, LLC