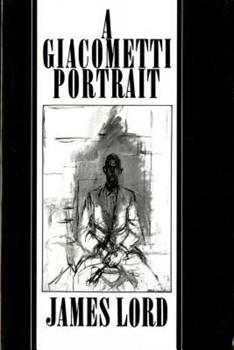 When we look at a painting hanging on an art gallery wall, we see only what the artist has chosen to disclose--the finished work of art. What remains mysterious is the process of creation itself--the making of the work of art. Everyone who has looked at paintings has wondered about this, and numerous efforts have been made to discover and depict the creative method of important artists. A Giacometti Portrait is a picture of one of the century's greatest...

Published by Thriftbooks.com User , 13 years ago
This book is interesting. I enjoyed the models perspective, but the beginning is better than the whole. It need something more in the end.

It was all in the facial expression with Giacometti-transfixed....

Published by Thriftbooks.com User , 14 years ago
I always know when I am confronted with a portrait by Giacometti. The manner in which he presents his work is completely different to that of any other artist. Giacometti was haunted by a desire to understand what it meant to be alive. His own life he could dismiss, but faced with another, the mystery of his alien being-how it filled up space, how it battled with the hostile elements of its existence-seemed to Giacometti infinitely mysterious and marvelous. It was, above all, the head that perpetually challenged him, and more specifically the gaze-the look that another person exchanges with us, which Giacometti saw as both unfolding the mystery of that personality and yet, perpetually concealing it. The portrait of "Jean Genet" is beautiful. Giacometti had known Genet for a year when he painted "Genet" oil on canvas. It is an impressive picture. It was Genet's appearance that had first drawn Giacometti to him, especially the shape of his head, so bald, so round-a skull in which the whole mystery of personality resided. He avoids the allure of colour; instead the picture is brown and white, with just the faint streaks of earth red to enliven it. Yet never is it more clear that a human being is a creature of majesty. When Giacometti used his wife as a subject of painting you can see through the art he was striving to come to terms with this person who, in theory, was the closest to him. The piece of work, "ANNETTE" It is almost as though he has scratched her portrait out of a world of white into which she would otherwise disappear. There are black markings that claw her back. She seems as riveted and horrified by the experience of encountering her husband's gaze as he is by hers. Those great eyes of hers glare at the world without emotion, the lips are pursed, and, although the body is sketchy, there is an uncanny sense of presence. He has cought her, as if in a momentary flash of light, and there she will stand transfixed forever.

TO SEE VERY MUCH

Published by Thriftbooks.com User , 20 years ago
Anyone who has ever wondered how a truly great artist gets his inspiration, works on a daily basis and incorporates his philosophies of life into his work will want to read this terrific story of how a young, American writer sat for his portrait by the legendary Alberto Giacometti.Almost non-stop upon their meeting, Giacometti opens up and begins letting his thoughts come tumbling out of his mouth. He tells his subject that he looks like "a thug...if I could paint you as I see you and a policeman saw the picture he'd arrest you immediately!" And then, "Don't laugh. I'm not supposed to make my models laugh." He tells the author of his trip to London's National Gallery where he says, "...I deliberately didn't look at the Rembrandts, because if I had looked at them I wouldn't have been able to look at anything else afterward." Later on in his work, "It's impossible to paint a portrait...the photograph exists and that's all there is to it."Giacometti was not only one of the greatest artists of the last century he was also, obviously, a wonderful, contradictory, clever, intelligent, verbal, loving, open, warm companion. When the painting is not going well, the artist exclaims, "If only Cezanne were here, he would set everything right with two brush strokes." Lord gently corrects him pointing out that Cezanne had plenty of trouble. And then Giacometti (probably with a hint of happiness) agrees, "Even he had trouble."One comes to know these two men so well in this small, beautifully written memoir that one feels close to them and to their emotional upset when after only eighteen days, they part ways. The author reminds us that Giacometti would be the first to remark that a portrait could only achieve a "semblence of reality." He hopes that the artist will enjoy this written portrait. As Lord writes, "To see even so little will be to see very much." True.Included in the paperback are snapshots taken to show Lord's portrait in progress. HIGHLY RECOMMENDED.

Published by Thriftbooks.com User , 22 years ago
This book is a must, for fans of Giacometti's work and for artists world wide. It gives one the opportunity to be in the studio with a great artist. It is wonderfull but terrible at the same time, as an artist, I came away from the book feeling completely insignificant untalented and without hope, however this is a good thing, it is an experience all artists must, and do go through. Please read the book you will learn so much!
Copyright © 2020 Thriftbooks.com Terms of Use | Privacy Policy | Do Not Sell My Personal Information | Accessibility Statement
ThriftBooks® and the ThriftBooks® logo are registered trademarks of Thrift Books Global, LLC