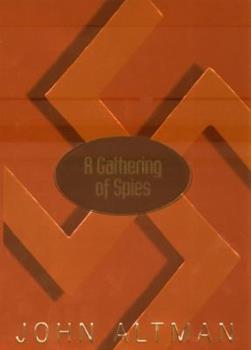 A Gathering of Spies

A beautiful Nazi spy and an enigmatic British double agent match wits in this gripping World War II thriller Gorgeous, cunning, and lethal, Katarina Heinrich is America's worst nightmare. For years,... This description may be from another edition of this product.

Published by Thriftbooks.com User , 22 years ago
If you're looking for an entertaining, fast paced thriller, this book is it. I thoroughlly enjoyed it, and am now sharing it with my family.

Published by Thriftbooks.com User , 22 years ago
I found it hard to believe this was Altman's first novel. It is a classic spy yarn with thrills and twists and violence at every turn. I give it 5 stars!!!

Published by Thriftbooks.com User , 22 years ago
From the moment Katarina Heinrich, a German spy, kills Catherine Danielson and assumes her identity, I was caught in a web of thrills that kept me turning pages as Katarina, now Catherine, marries a Princeton professor, and moves to Los Alamos where she discovers AlbertEinstein's 'secret'letter toFranklin DelanoRoosevelt detailing a secret,the development of the A Bomb. Altman takes you through a plot of spy and counterspy which keeps you glued to the page. Will Katarina deliver her secret to the Germans? A subplot involving an English spy whose wife in interred in Dachau provides excitement while the reader learns if a man will do "anything" to get his wife out of a concentration camp. Hitler and his cohorts that run the Nazi machine come to life as real, manipulative and vulnerable. Reading A Gathering of Spies until six thirty in the morning was worth the loss of sleep.

Published by Thriftbooks.com User , 22 years ago
V.1353 is Katarina Heinrich, a German spy trained to be the best at infiltrating American society. Her job is to gather information to enable the Fatherland to win the upcoming war. In December 1933, Katarina kills Catherine Danielson and assumes the dead woman's identity. She moves to Princeton where she becomes a housekeeper for Richard Carter. Soon, Richard and "Catherine" marry. Katarina the spy becomes dormant. In 1942, her spouse obtains a top-secret job working on a weapon of mass destruction at Los Alamos.Katarina kills someone else to use her identity to bring information on the project to Germany. Andrew Taylor recruits Harris Winterbotham to serve as a double agent, spying for the Germans. Harris knows the Germans have his wife incarcerated at the Dachau concentration camp and plans a triple cross to free his spouse. His actions lead him to a confrontation with the efficient and effective Katarina.A GATHERING OF SPIES, John Altman's debut novel, is one of the year's best espionage thrillers. The action-packed tale dramatizes life in Germany, Britain, and the United States at the early part of World War II. The realistic characters include heroes and villains ordering innocent people to perform abominable tasks or else. Mr. Altman opens with a triumph that hopefully will be accompanied by more WW II spy stories.Harriet Klausner
Trustpilot
Copyright © 2022 Thriftbooks.com Terms of Use | Privacy Policy | Do Not Sell or Share My Personal Information | Accessibility Statement
ThriftBooks® and the ThriftBooks® logo are registered trademarks of Thrift Books Global, LLC