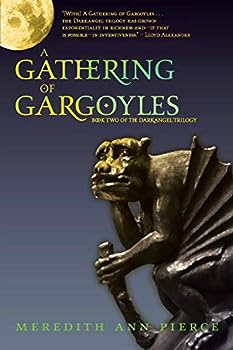 A Gathering of Gargoyles (The Darkangel Trilogy)

(Book #2 in the Darkangel Trilogy Series)

Book Two of the Darkangel Trilogy Aeriel has broken the spell on the vampiric darkangel known as Irrylath and returned him to his human form, but the White Witch continues to haunt his dreams. To save... This description may be from another edition of this product.

Published by Thriftbooks.com User , 18 years ago
"A Gathering of Gargoyles" is the second of Meredith Ann Pierce's 'Darkangel' trilogy, beginning with "The Dark Angel" and accumulating in "The Pearl of the Soul of the World", which together create one of the most beautifully crafted and presented stories that I have ever come across. As told in "The Dark Angel", the story is of Aerial, a simple slave in a wealthy household whose mistress Eoduin was captured by one of the dreaded winged vampyres, who drink the blood and steals the souls of women. Aerial followed her mistress, becoming a servent in the Irrylath's house, and to her horror, eventually being chosen to be his last bride. But with the help of the dwarf-like duarough Talb and a magical drought, she restored the darkangel to humanity by literally exchanging hearts with him, and returned him to his mother's house.And now Aerial is appointed another task set to her by the deceased spirits of the brides: to seek out the missing lons, the powerful animal-like wardens of the land who have long been missing, most likely due to the designs of the White Witch, the maker of the darkangels, who still haunts Irrylath's dreams. Despairing of her husband's inability to love her, Aerial takes up the task and sets off on a journey to the temple of the sibyl in her own homeland to unravel the mystery of an ancient riddle that will help her find the missing lons. Armed with a dark staff with a heron passenger, she not only seeks the lons, but unknowingly finds the secrets of her own past, and her role in the destiny that follows in the war against the Witch. Unlike "The Darkangel", which was created in more of a circular narrative in the fairytale motifs of capture, trial and restoration (much like in 'Sleeping Beauty' or 'Snow White'), "A Gathering of Gargoyles" is a voyaging novel, with an ultimate goal hindered by several obstacles. And these obstacles, far from dragging the story on, are fascinating: a sail across a Sea-of-Dust, hidden danger in a City of Thieves, a chase through a dark forest filled with night-haunts, the rescue of a rather unusual maiden sacrifice, a time of being held in captivity by a man who has sold his own name, the relighting of a great lighthouse, and finally, with the meeting of two familiar characters from the first book - one good and one evil - the climax of the quest. Although the premise may look silly written down, perhaps seeming to belong to a trashy vampiric-romance paperback, I assure you it is *not*. Meredith Pierce creates a world with depth and resonance, perfectly mingling together elements of many cultures - the German loreleis, the European gargoyles, the Grecian sphinx - into a familiar, yet totally unique blend. Unlike many fantasy authors -and Tolkien imitators- these days, who feel as if they must cram detail upon detail into their books in order to make it seem realistic (but only succeeding in making them encyclopedic), Pierce creates exotic worlds and its wildlife with barely any effort; a different

It was a beautiful book...

Published by Thriftbooks.com User , 21 years ago
I stumbled across this book quite on accident. I had read theDarkangel, and had been very disappointed with its ending. When Irealized there was a sequel (and one after that) I was thrilled.AGathering of Gargoyles did not disappoint me either. It lived up to the talent and promise shown in the first book, adding richer characters and slowly revealing more character traits in Aeriel that even she was not aware of.I loved the companions she met along the road, Nat, Galnor, and Erin. I loved the way that Pierce did not try to make Aeriel a perfect person. She is not. She does not always make the correct choices. She allows her love for Irrylath to overcome reason sometimes, but it only makes for a better and more touching story. It is hard to sympathize with someone if they are perfect.If anyone has ever been in unrequited love (you know who you are) you know the kind of pain it can cause. The story begins with Aeriel married to Irrylath, but knowing full well that he can't stand the sight of her. I ached for Irrylath to love her as much as she loved him.The only concept I didn't like (and this goes for the first book as well) was the several times that Aeriel either told or was told a story that turned out (through strange coincidence) to be her or the person she was talking to. I wouldn't mind so much if she would realize it, but its as if she purposefully stays in the dark. It frustrates me. Hardly worth mentioning, as it's the only constructive criticism I can offer.All in all, this was a lovely book that lived up to expectations of the Darkangel.

Published by Thriftbooks.com User , 21 years ago
This is by far the best book in the Darkangel Trilogy; it stands on its own quite well, although the prequel and sequel should be sought out if you want to find out about the ends of the story.Pierce's lyrical style is reminiscent of Robin McKinley's or Patricia McKillip's. It is simply adorned language that flows easily and can take your breath away. With words she paints a vivid, colorful world as fantastically beautiful as any other you would find. And in that land great things are stirring--Aeriel, who has given her heart away, must leave the man to whom it belongs to fulfill a prophecy. While seeking the vanquished guardian lons, she meets friends and enemies alike. Although these characters are enjoyable by themselves (save admittedly flat antagonists), the majority of Pierce's attention is appropriately given to Aeriel. We grow to know her and her quiet reserve; even her rare, wry humor. Through her eyes we see the Sea-of-Dust and the plight of the gargoyles during her journeys.Loose your imagination. This is an elegantly-written book worthy of a read by any high fantasy fan.

Published by Thriftbooks.com User , 22 years ago
A Gathering of Gargoyles was a quickly read book considering the fact that I couldn't put it down! This novel puts more depth in the characters, especially the two main ones, Irrylath and Aerial. Their relationship becomes less than the reader expects from the first volume, Darkangel. This once again puts Aerial through another action packed journey. Mystery slowly unfolds in Aerial's unclear past. I would recommend all readers out there to grab this book for a fantastic ride through an unknown place and time. If you haven't read Darkangel, I'd advice you to read the equally exciting first volume. I can't wait to put my hands on the final book of the Darkangel Trilogy!

Published by Thriftbooks.com User , 22 years ago
At first I wasn't sure if I'd really like this book. This was partly because I found it at my library while looking for books by Tamora Pierce. I din't even notice that it wasn't by her until I got it home and really looked at it. I was quickly drawn into the fast paced novel, and I had a very hard time putting it down! The fantasy world that Ms. Pierce created is fantasticly detailed. Her characters portray emotions in a way that is really human. I especially fell bad for Aerial. You can tell that she really loves her husband and wants him to let her into his world. I feel her pain every time he callously shoves her away. And even though I'm kinda partraying it as a downer, this book has it's really happy moments. It's filled with suspense, action, fantasy and magic! In short, what more could you want?
Copyright © 2022 Thriftbooks.com Terms of Use | Privacy Policy | Do Not Sell My Personal Information | Accessibility Statement
ThriftBooks® and the ThriftBooks® logo are registered trademarks of Thrift Books Global, LLC