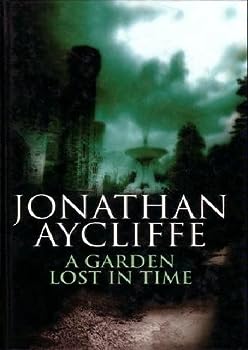 This description may be from another edition of this product. January 1917, Cornwall. Following the death of his father in The Great War, Fifteen-year-old Simon Lysaght is sent to live with his Uncle, Sir David Trevelyan, who rules over the wickedly ancient...

Published by Thriftbooks.com User , 17 years ago
Set in 1917 Cornwall, Jonathan Aycliffe's Garden Lost In Time is a gripping mystery which tells of a teen sent to live in a family estate house after the death of his father, only to find a dangerous pattern of murders and deaths evolving. The discovery of an enclosed garden and its secrets will keep Simon at the cutting edge of danger - and his readers on the edges of their seats.

Who is it that speaks of death?

Published by Thriftbooks.com User , 17 years ago
"A Garden Lost in Time" has two horror themes, either one of which would have gestated a strong plot. Twinned, they seem incompatible. One theme is concerned with the horrors of World War I trench warfare. The other is more classical horror, involving generations of child murders and black magic.Jonathan Aycliffe is my favorite living writer of the supernatural, and this book has some very spooky moments. A Van Helsing-type character tries to exorcise evil from a girl who may or may not be alive. Later she does or does not die, and is buried. Mostly the classically-themed horror is muted rather than straightforward: footprints begin and end in the snow of an abandoned garden; swans refuse to return to a manor's lake; a child is terrified in Cripplesease Woods and "never stopped looking over his shoulder when there was nothing to be seen."The horror of trench warfare is treated in a more straightforward manner by Aycliffe: a man's legs are blown off; another soldier loses half of his face; mustard gas cripples a third. Meanwhile a hunchback makes ammunition for the war in a poisonous shot tower on the estate of Trevelyan Priors in Cornwall. Children who are drawn to the tower disappear or fall mysteriously ill.Trevelyan Priors becomes the new home for fifteen-year-old Simon Lysaght after the death of his father in France. The Trevelyans have lost one son in the war, and another returns home incurably crippled. Simon is barely through the door of his new home when a maid commits suicide by throwing herself out of a window. He doesn't know it, but her death is a portent of what the rest of his stay is going to be like. People drown, disappear, commit suicide, are murdered or are slaughtered in France. Their deaths are mainly narrated second-hand through Simon's diary, letters to and from his mother, and his aunt's lengthy correspondence. It is a rather la-de-da method of telling a horror story, although Bram Stoker pulled it off in "Dracula." It doesn't work quite as well, here. The blurbs on the back cover refer to Aycliffe's story as "spare," "elegant," "intelligent," "literate," and "filled with fine research." The reader does learn quite a bit about shot towers, architecture, and the literature of black magic. But as much as I like this author, I languished through passages about swans, swan-necked maidens, and a girl who hangs out in a ruined conservatory and doesn't seem to have anything to do with the plot--talking ghosts are a definite bore. Maybe I was just lost in a thicket of multiple plots, deaths, and a horrible war, and this book deserves a second reading.

In the tradition of MR James

Published by Thriftbooks.com User , 17 years ago
My introduction to Jonathan Aycliffe's work began with Naomi's room a couple of years ago, and since then I've been hooked, and have read all of his works. His latest offering doesn't disappoint either...it is a tale of pervasive darkness [an underlying theme in all of his works] and the corruption of souls. Aycliffe's style is reminiscent of MR James, another master of classic horror, and fans of the classic ghost story will not be disappointed in this work.
Copyright © 2020 Thriftbooks.com Terms of Use | Privacy Policy | Do Not Sell My Personal Information | Accessibility Statement
ThriftBooks® and the ThriftBooks® logo are registered trademarks of Thrift Books Global, LLC