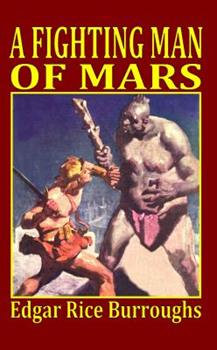 A Fighting Man of Mars

(Book #7 in the Barsoom Series)

A flying plane dropped out of the night. It seemed a spectral ship. Silently and quickly it landed behind Sanoma Tora and Sil Vagis. Warriors sprang from its low cabin. Sanoma Tora was seized roughly from behind. With the sudden mysterious disappearance of Sanoma Tora, one of the richest heiresses of Mars, begins this tale of breathless adventure in a strange, fantastic world. A story of reckless love on a far-off planet.

Tan Hadron of Hastur charges to the rescue of his beloved

Published by Thriftbooks.com User , 12 years ago
Sanoma Tora, beautiful daughter of a rich and powerful leader on Barsoom has been kidnapped! Noone knows by who or why, but the poor but courageous Hadron of Hastur (who has been paying court to her) volunteers to charge off to her rescue. Never mind that Sanoma Tora is a spoiled little gold-digger who has snubbed our hero at every turn, making it clear that he is neither rich nor influential enough to get into *her* bed... Guided by his passion for Sanoma Tora, he sallies forth to rescue her. In the process, he kills bad guys, rescues the innocent, enlists the aid of allies, becomes the hero to a poor escaped slave girl, and saves the entire fleet of Helium (the nation of John Carter, Warlord of Mars) from certain doom. Romance figures large in this one, with unrequitted love, by and for Hadron being the essential themes of this book. Needless to say, Hadron acts with honor, comes to his senses about the pampered princess/spoiled, self-serving brat (pick one or more), fights heroically, outwits his enemies, saves the day, and finds a more worthy love. All of the above is obvious, but getting there is a first rate ride. Another tale of Barsoom, another winner, and another reason to read the next one. E. M. Van Court

ONE OF THE BEST OF THE MARTIAN SERIES

Published by Thriftbooks.com User , 16 years ago
From the first page you will be hooked. This particular book was first published in installments around 1930, as was the custom with pulp fiction at that time. The series was more or less reintroduced during the early 1960s (that is when I started reading them) and has been around ever since. For a work to last that long indeed says something. I have to agree with the reviewer (Mr. Wallace) in that this is one of the better works of the series. Each page if filled with wonderful improbable action and the villians are endless. While John Carter is indeed a part of the story, the main character is one of his top warriors, Hadron of Hastor. Plenty of Damsel in Distress stuff here, and all good clean fun. If you have never read the series, suggest you do. If you have "out grown" the series, suggest revert back to the little boy or girl lurking deep within you and let him or her out. You won't be sorry. Recommend this one highly.

Published by Thriftbooks.com User , 18 years ago
The seventh book in the Martian series of Edgar Rice Burroughs, "A Fighting Man of Mars" is communicated to the author via the Gridley Wave (there is something rather quaint about the old convention of having a prologue purporting that what follows is true). Unlike the Tarzan series where ERB put his hero a series of similar adventures involving one lost civilization in the African interior after another, the Martian series offers up a series of heroes who have to rescue the woman they love. The titular character for this endeavor is Tan Handron, a Padwar of Helium who is in love with Sanoma Tora, daughter of Tor Haten, the Umak commander. Tan Handron is descended from a princess of Gatho, which pleases Tor Haten, who is only a minor noble, but Sanoma spurns the young padwar's love because he is poor. Tul Axtar, Jeddak of Jahar, is also interested in her hand, but before anything can be arranged, Sanoma is abducted by a mysterious flier and the chase is on. "A Fighting Man of Mars" was originally published in six-parts in "Blue Book Magazine" during 1930 and appears to be rather different from ERB's earlier Martian stories in that for one the damsel in distress is not a Barsoomian princess. As Tan Handron pursues the woman he wants across Barsoom he encounters some of ERB's better villains (basically a new one for each installment in the series). As Handron deals with green men and white apes, spiders, mad scientists, and cannibals, he picks up a companion and uncovers a plot that puts all of Barsoom in danger and sets up the big climax. This is one of ERB's better books, arguably in the Top 10 of his pulp fiction adventures mainly because of all the fantastic creatures, futuristic weapons, and deadly dangers he crams into its pages. With Tan Handron ERB has a hero who is more plagued by doubt that we usually find and I also appreciate that in the end our hero goes for a real relationship rather than some idealized notion of love from afar. "A Fighting Man of Mars" shows that ERB was a master of the serialized ("to be continued...") adventures.

Published by Thriftbooks.com User , 18 years ago
This is one of the first science fiction/fantasy books I ever read and I couldn't bear to see it languish without a review. My copy (which originally belonged to my father) dates from 1931 and its story was originally published in six parts in the "Blue Book Magazine" from May to September 1930. It is wonderful to see these books reissued, as they are the progenitors of many, if not all of the heroic fantasy serials that take up so much room on modern bookshelves. Edgar Rice Burroughs (ERB) was the first and also (in my opinion) the best writer of multi-volume fantasies.'Fighting Man' is the seventh book in ERB's Mars series and differs from most volumes in the series in that John Carter, gentleman of Virginia and Warlord of Barsoom (Mars) is only a peripheral figure. The adventure is narrated in the first person by Hadron of Hastor, a warrior in the service of John Carter. Hadron's family is rich in honor but not in material possessions and when he falls in love with the wealthy Sanoma Tora, she snubs him. For months, the soldierly Hadron haunts the palace of Tor Hatan, Sanoma Tora's father, but his hope of winning her are vanishingly small until she is abducted one night by a mysterious flier.The strange ship is armed with a weapon that disintegrates the metal of a pursuing flier, and the Warlord realizes that there is now a new weapon of mass destruction let loose upon the dying seas of Barsoom (it's hard not to adopt ERB's style after reading one of his books).Hadron is promised Sanoma Tora's hand if he can rescue her. The Warlord dispatches the doughty warrior in search of his love, and asks him to keep an eye peeled for the new metal-disintegrator weapon.Since this story was originally written to be serialized, there is a cliff-hanger at the end of every chapter. Hadron's flier is shot down by the terrible green warriors of Barsoom. He escapes and is trapped in a deserted tower by a man-eating white ape. He escapes, rescues a slave named Tavia from the green men and the two of them take to the air in Tavia's flier. Unfortunately, they are forced to land in the demesne of a very paranoid tyrant. While Hadron is confined in the tyrant's Pit, he learns the secret of the invisible metal-disintegrating ray from a fellow prisoner.Hadron, now under a sentence of death must escape to save both Sanoma Tora and all of Helium (John Carter's Barsoomian kingdom).Our hero battles his way across the dead seas of Barsoom, evading or slaughtering cruel tyrants, mad scientists, formidably-tusked green warriors, etc. until the final reaches of chapter seventeen when he resolves all of the plot lines and finds his own true love (not who you might think). 'Fighting Man' has all of the color and breathless dash of its predecessors in ERB's Mars chronicles. It's okay to start your adventure on Barsoom with 'Fighting Man,' although I would strongly recommend beginning at the first volume, "A Princess of Mars." 'Fighting Man' can stand alone because ERB

One of the best books from a GREAT action series!!!

Published by Thriftbooks.com User , 22 years ago
Edgar Rice Burroughs went all out with this "John Carter of Mars" series! There's never a dull moment, with non-stop fight scenes and a lot of romance (every book has at least one beautiful "damsel in distress" who needs rescuing). This particular book was one of my favorites, as John Carter goes under-cover to defeat the assassins guild in Zodanga. The characters are many, and they're a colorful bunch (my favorite: Rapas the Ulsio, and enjoyably repulsive character who befriends Carter while at the same time trying unsuccessfully to kill him!) This book is sci-fi wild-west action at its best, with gorgeous women, evil mad scientists, brave heroes, and sword-fighting galore! A fun book!
Copyright © 2020 Thriftbooks.com Terms of Use | Privacy Policy | Do Not Sell My Personal Information | Accessibility Statement
ThriftBooks® and the ThriftBooks® logo are registered trademarks of Thrift Books Global, LLC