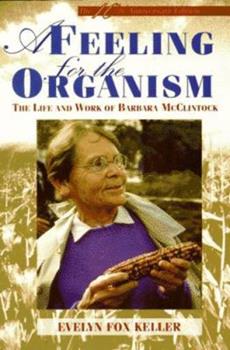 A Feeling for the Organism: The Life and Work of Barbara McClintock

A biography of the Nobel Prize-winning scientist explains her work in genetics and traces her long unheralded career as a research scientist.

Published by Thriftbooks.com User , 12 years ago
This book is a biography of geneticist Barbara McClintock. Keller is a scholar and researcher with a special interest in women scientists. In this book, she presents the life and work of Barbara McClintock. She explains the importance of McClintock's work and her incredible ability to observe of genetic variation from the physical appearance of plants. She also details the context of McClintock's work, noting the difficulties McClintock faced in pushing her research program forward in an academic world that had no room for women scientists. The book is quite interesting for bringing to light McClintock's discoveries regarding gene transposition, as well as for its description of the special challenges McClintock faced as a woman trying to work in a man's world.

What it takes to break the icy ceiling

Published by Thriftbooks.com User , 15 years ago
People talk about glass ceilings, but the ceilings Barbara McClintock broke through were much colder than that. Evelyn Fox Keller, one of the most insightful writers who deals with issues of gender in science, conveys both McClintock's solitude and anguish and her passion for analyzing and understanding her organism's genes and how they affected the corn plants. The holistic approach to the organism is possibly a feminine approach to science, but in her day, admitting to female qualities was a no-no of the most chastised form. She never got tenure, never married, and finished her career as an isolated scientist at a research laboratory. But she never lost the passion for science. The Nobel prize was almost an after thought, certainly received for work completed and presented to dead silence much earlier in her career. Fox Keller sensitively conveys both what she thinks is important and what McClintock herself thought was important (just the science, ma'am!).

A Life in Science.

Published by Thriftbooks.com User , 16 years ago
Barbara McClintock was a maverick from the very beginning. Her parents did not consider education as the best option for a woman. Her relationship with her mother was particularly frictitious. She made the decision to study botany at Cornell, and her love of the genetics grew. She worked on maize at a time when most cytogeneticists were working on Drosophila. It can easily be argued that nobody understood the maize plant and its genetics as well as she did at the time. The book can get quite technical midway, and will be appreciated best by those with a background in genetics. McClintock was a woman way ahead of her time, in fact, decades ahead. She could not be promoted to certain positions at several institutions simply because she is female (despite a superior knowledge in cytogenetics). It took approximately 5 years for McClintock to finish and publish her results on transposable elements in chromosomes (transposons). She gave numerous presentations on her discoveries and nobody understood - at a time when molecular biology was taking over the field of cytogenetics. This book shows that science is not always objective. It also brings up legitimate points as to whether the prevailing Western view of Science (i.e. the scientific method) is efficient enough in scientific research and discovery. I highly recommend this book!

Must read for anyone interested in women in science!

Published by Thriftbooks.com User , 24 years ago
I discovered this book as I was looking for a text for my university seminar, "Women in Science". The search has been frustrating because there are so few readable but substantive books on women who have contributed to our knowledge of the world. There's a lot of fluff; but what I wanted to show my students was the struggles as well as the triumphs--the frustrations, as well as the acolades. I wanted them to see the scientific landscape through the eyes of a woman, and to hear her voice. This book offered that and so much more. Unlike Sy Montgomery's "Walking with the Great Apes" (Houghton Mifflin, 1991), which follows the careers of Goodall, Fossey and Galdikas, Keller resists the temptation to go kitsch. Instead, she showed what made Barbara McClintock a Nobel Prize winner and a scientific outsider. --Nan Crystal Arens, Assistant Professor, Integrative Biology, University of California, Berkeley

A story of science as well as a scientist.