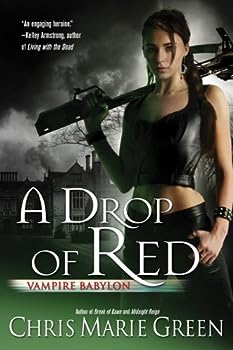 A Drop of Red (Vampire Babylon)

(Part of the Vampire Babylon (#4) Series and Lilly Meratoliage Series)

If you run out of vampires to destroy at home, there's always work overseas... Hollywood stuntwoman-turned-vampire-hunter Dawn Madison, along with her comrades, managed to wipe out the Los Angeles... This description may be from another edition of this product.

Published by Thriftbooks.com User , 13 years ago
A Drop of Red (Vampire Babylon)as a fan of Chris Marie Green this is just a spellbinding as the others. You get caught up with the continuing saga of Dawn and Costin/Jonah connection and you get more information about another duo of masters from when Costin was originally a vampire with a little twist to the connection between these two masters. Dawn's dad Frank is still in the picture being a better father as a vampire than he was as a human figure that. The burning question for this trio of Vampire Babylon is how long does the team stay together before either dying or for the females become one of the Friends? Dawn feels that she is destined to become the next Friend but how can she if her power is just developing. As usual we have to wait for the next book to get the answers

A fast-paced novel of intrigue, investigation and danger

Published by Thriftbooks.com User , 13 years ago
This fantasy about a Hollywood stunts woman turned vampire hunter is a fine pick for any library where vampire fantasy novels are popular. It tells of Dawn, who has nearly single-handedly led the revolution against vampires in Los Angeles - uncovering her own dark family influences in the process. Dawn is exhausted - and facing a new vampire threat in England in this fast-paced novel of intrigue, investigation and danger.

Published by Thriftbooks.com User , 13 years ago
This series has everything, fun, danger, fighting, lust!!! This series is one of the few series that I never know what is going to happen next... Chris Marie Green keeps her readers guessing and I for one can't wait to turn the pages. Dawn is always struggling for her feelings for Costin and Costin is always fighting for control with Jonas. Costin is like a ghost who used to be a vampire and then was given the chance to save his soul so he goes out and finds host that he could use their body to take down all the other blood brothers and their undergrounds. But on the last adventure Jonas was about to die and Dawn turned him and into a vampire once again. So this book picks up with Dawn/Costin fighting their feelings for each other and Costin in a struggle for control with Jonas. Jonas wanting to see more action. The rest of the team is all there even Eva, Dawn's ex-vampire mother and her now dead vampire father! This book they find an underground in Loundon and they are persuing the vamps and find this underground is totally different then the one in the US! So if you have not gotten this series go out buy all 4 books and enjoy the ride...I can't wait for book 4!!!! Others you may like: J.R Ward, Patricia Briggs, Laurell K. Hamilton, Jeanine Frost, Rachel Vincent, Jennifer Armintrout etc....

The writing is slick and the dialogue is top-notch

Published by Thriftbooks.com User , 13 years ago
Green continues her Vampire Babylon series, which stars Hollywood stuntwoman-turned-vampire-hunter Dawn Madison, in the latest installment, A Drop of Red. Moving the setting from the glam and glitz of Hollywood to the gritty streets of London, Green kicks the action up a notch after Dawn and her comrades manage to wipe out the vampires of Los Angeles. The writing is slick and the dialogue is top-notch. In this crowded field of urban fantasy series, Green's series is a pleasant one. Dawn Madison is likeable, and the world-building is quite strong, though with a greater dash of "humanity" rather than supernatural. The villains are creepy, even chilling, in their violence and mayhem, and they create an ever growing tension as the plot works to its stunning finale. According to Green, A Drop of Red is the first of a new trilogy within the Vampire Babylon series. "The three books together build character and mythology arcs until everything culminates in the third book." If you're looking for a new urban fantasy series to try, Vampire Babylon is a solid entry. Start with book one, the 2007 release, Night Rising and enjoy. Reviewed by Angela Tate

urban fantasy at its best

Published by Thriftbooks.com User , 13 years ago
Limpet and Associates have traveled to England to wipe out another vampire underground. Many centuries ago, Costin exchanged blood with a man who made a deal with the devil; like a bloody Ponzi scheme, he turned his closest advisors into master vampires who go out and create armies. So when he wakes up from a centuries-long sleep, he has soldiers around the world waiting to do his bidding. Cortin hated what he has become and merged his consciousness with the body o f Jonah Limpet to destroy these underground pockets; praying his soul will be returned to him. Muscular Hollywood stuntwoman Dawn Madison is believed to be the "key" to Costin regaining paradise lost by destroying the underground vampire units as he did in Los Angeles (see the first Vampire Babylon trilogy). The Romanian psychic Natalia who hears the dead joins the Limpet group and, Dawn finally accepts her. The group learns about young teens attending the Queenshill School in St. Alban's. They were turned by a master who is training them to take their places in the underground's main hive. The new vamps love night stalking searching for bodies to drink from and mutilate. They are confident that no one can defeat them, but Dawn and her crew are going to test that premise. This is the start of the second Vampire Babylon trilogy saga and it is radically different from its excellent predecessor though as superb. The key is the California and England undergrounds are dramatically dissimilar from one another as are the creatures of the night. Dawn remains somewhat uncomfortable in her role, but has adapted mentally; she was already strong before her new task so physically her adjustment was easier. A DROP OF RED is urban fantasy at its best; filled with interesting characters and a fast-paced story line in which death has several outcomes but is always a bite away. Harriet Klausner
Trustpilot
Copyright © 2022 Thriftbooks.com Terms of Use | Privacy Policy | Do Not Sell or Share My Personal Information | Accessibility Statement
ThriftBooks® and the ThriftBooks® logo are registered trademarks of Thrift Books Global, LLC