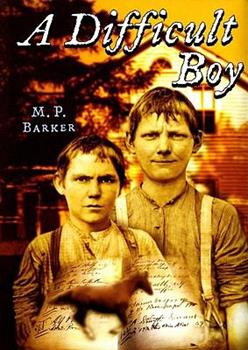 (Book #1 in the Daniel Linnehan Series)

Riveting historical fiction from a debut novelist about the friendship that grows between two young indentured servants, one of them Irish, as they struggle to survive their harsh master in nineteenth century New England. It is 1839, Nine-year-old Ethan does not want to work for Mr. Lyman, the wealthy shopkeeper in their small Massachusetts' town. But Ethan has no choice--it is the only way to pay off his family's debt to the man. Ethan tries to befriend...

Published by Thriftbooks.com User , 13 years ago
What a pleasure to read this book on so many levels. Not only is the story compelling, but the historical background material is totally accurate. I felt like I was right there!!!! The author's eye for detail is exquisite. .....lovely to read. I was caught up in the story from the first page. The characters are all realistic and seem to mirror 19th century customs and culture. The story about prejudice and how it is overcome when you get to really know someone is fabulous, but does not hit you over the head with it. It's a great way to show people that underneath it all we are all alike. Loved, loved it and I can't wait for her next book.

Published by Thriftbooks.com User , 13 years ago
Although I'm not usually a fan of historical fiction, I absolutely could not put this book down. A Difficult Boy is the story of an indentured servant, Ethan, who gradually makes friends with another servant named Daniel. Everyone calls Daniel a difficult boy because he appears unfriendly and unkind. However, Ethan unravels the source of this unfriendliness: both boys are severely beaten by the man who owns the land that they work. Daniel is also beaten worse than Ethan, because he is an immigrant from Ireland and the owner of the land, Mr. Lyman, does not like him for this reason. Driven together through this, Ethan and Daniel forge a strong friendship that brings them together so that they can escape the beatings and that life. A Difficult Boy is a worthwhile historical fiction that is both well written and interesting.

Published by Thriftbooks.com User , 14 years ago
MP Barker's A DIFFICULT BOY grabbed me from the beginning. Her main characters, Ethan and Daniel, are engaging, well-rounded and likable boys. I adored the horse element of the novel and would recommend this book to anyone looking for a great read.

Published by Thriftbooks.com User , 14 years ago
I found it very interesting and engaging, and I think that other adults would also find it worth their time. Having the younger of the protagonists be nine allowed for the writer to have certain facts explained to Ethan, which also introduced the reader to unfamiliar facts or concepts related to the time-period, without seeming contrived. The imagery was descriptive enough that one could immerse oneself in the story with ease. The characters were well-enough defined, and their situations compelling enough that one cares about the characters and their relationships and wants to find out how the story will unfold.

Published by Thriftbooks.com User , 14 years ago
This is a beautifully written book, intended for a young adult audience, but appropriate for all ages. It does not "dumb down" the language or sugar-coat the hardships of rural life for immigrants and the poor early 19th century. At the same time, the beauty of the natural world and the rhythm of farm life are painstakingly portrayed. The feelings of anger, loneliness, and displacement of Daniel, the Irish boy, are described in a way that most teens and many adults can easily identify with. The bond between the two boys and also the bond between Daniel and his horse, Ivy, are movingly captured. This book is a "must read" for teachers and young adults, a book that depicts a historical time and place, but renders emotions in a way that would speak to young people today.
Trustpilot
Copyright © 2022 Thriftbooks.com Terms of Use | Privacy Policy | Do Not Sell My Personal Information | Accessibility Statement
ThriftBooks® and the ThriftBooks® logo are registered trademarks of Thrift Books Global, LLC