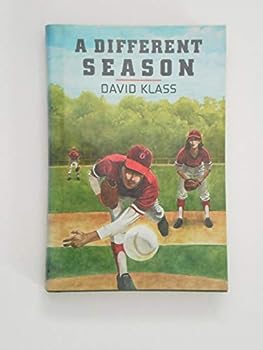 Timeless fable tells of an overconfident little fox who steals a plump pet hen and is hotly pursued by Farmer Brown's boy and Bowser the Hound. Children will delight in Reddy's risky antics and the commotion his behavior causes among the other woodland creatures. 6 black-and-white line illustrations. New preface.

Published by Thriftbooks.com User , 15 years ago
A Different Season is about a boy who really loves to play baseball. "Streak" is a senior at his high school, and is getting scouted to be a major league pitcher. In the middle of the season a girl named Jennifer comes, and joins the baseball team. At first Streak doesn't like having Jennifer on the team at all, but as the season moves on he gets to know Jennifer more, and starts too really like her a lot. Their baseball team has a lot of success. With Streak carting the team they make it to the county finals. Streak, after winning, starts to have some drinking problems, and you'll have to read to find out how far they make it in the county tournament, what happens between Streak, and Jennifer, and what is going on with his drinking problems. I really liked this book. Some things that I liked were that it was about a boy who pitches on a baseball team, and I am a pitcher on my baseball team. I could really relate to this book, and visualize what was going on. A dislike I had in this book was that they had a girl join a baseball team. It's kind of unrealistic. There would hardly ever be a girl join a baseball team. Some people that would like this book would be some people that like to play baseball, because that is what this book is mostly about. You would also like this book if you kind of like love stories.

Best book to me!!

Published by Thriftbooks.com User , 16 years ago
I am a teen, and i very rarely read books, and in fact i hate reading. When i was in my library and saw this book with a girl on the cover, on a baseball field it caught my eye. This is a great book for people who like reading about sexism in real life. It is one of the best books I have ever read and i do recommend it to all teen readers.

Can a Girl Play a Man's Game?

Published by Thriftbooks.com User , 17 years ago
A Different Season by David Klass is a great book about a boy who is named Jim. He is a phenomenon pitcher for Oakdale High and the scouts are crazy about him. His dad, Bill, is a former New York Yankee who suddenly had to quit baseball and is now a lawyer. Jim doesn't even know what happened to his father. The school year becomes sour when a girl at school that Jims likes tries to join the prestigious high school baseball team because the softball team is a bunch of losers with second hand equipment, Jim and the men of the town are outraged. But Jennifer is determined to play with the boys. When the School Board decides that she is allowed to play baseball, the season seems like a black hole. At the first scrimmage a news camera appears and baseball just doesn't seem the same. Then a new face rises from within and now two people have stolen the light from Jim. Joshua Bishop, a pitcher, and power hitter from rival, Hillcrest, and Jennifer are now the talk of the state. Jennifer is a second string second baseman and former sprinter, but the question still lingers. Can she steal home? If you like a good book about sports, women's rights, and love, you should definitely read this book. A story about a teenager dealing with the problems of his friends and life is a great plot and I guarantee that you will not be able to put this book down.

Published by Thriftbooks.com User , 21 years ago
I am 12 and i read this book in 3 days because it was so good and i could not put it down. I thinks it teaches kids my age alot about the consequences of drinking and driving. I like the book because i love baseball but this book taught me about the other things. I think this book is great and it is a good lesson. I give it 2 thumbs up.

Published by Thriftbooks.com User , 22 years ago
The book A Different Season is about a senior in highschool who plays baseball. The best girl athelete in Oakland High wants to play baseball with the guys. All the town people get upset, because a girl wants to play a guys sport. One problem, Jim falls in love with Jennifer. I really like this book, because it shows how important rights are between women and men. I also rate this book five stars, because I like it when guys and girls fall in love with each other.
Copyright © 2020 Thriftbooks.com Terms of Use | Privacy Policy | Do Not Sell My Personal Information | Accessibility Statement
ThriftBooks® and the ThriftBooks® logo are registered trademarks of Thrift Books Global, LLC