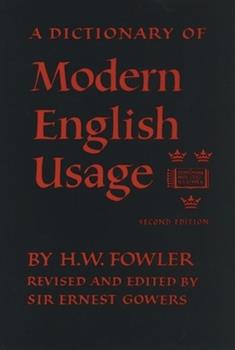 A Dictionary of Modern English Usage

This book is intended for general; students and teachers of English; anyone wanting guidance on the correct use of English.

The standard to which all the others are compared

Published by Thriftbooks.com User , 18 years ago
It is somewhat amazing that this book, first published in 1926, is still in print. The language has changed quite a bit since then; thousands of words have been added, hundreds have gone obsolete, and hundreds more have had their meanings shaded; and of course many of Fowler's pronouncements are now merely echoes of battles long lost or won. Not only that, but two newer editions of A Dictionary of Modern English Usage have been published, the excellent second edition edited by Sir Ernest Gowers in 1965 (now ironically out of print while the original finds yet another printing), and the not so entirely well-received (but underrated in my opinion) third edition, edited and revised by R.W. Burchfield in 1996.How to account for this phenomenon? Part of it is because Fowler's reputation only grew after his death as several generations of writers sang his praises and adhered to, or sometimes fussed about, his many dicta on usage questions both great and small. And as the years went by, and as the pages of his masterpiece gave way to wine stains and silverfish or the few remaining copies disappeared from libraries, he himself became a legend. Not everything he wrote is considered correct today, nor was it then. And sometimes the succinct yet magisterial little essays he wrote were followed by other little essays that were all but impenetrable, obtuse and somewhat overbearing. No matter. The good greatly outweighed the occasional misjudgment, and the education he afforded us remains.Another part of the story is that there is something very properly English and wonderfully nostalgic about the man himself. He was a bit of a character who lied about his age and joined the army when he was 56-years-old to fight the Germans in the Great War (only to faint on the parade grounds), a man who earlier gave up a teaching career because he did not feel it was his responsibility to prepare a student for the seminary. More than anything, though, the fact that this book is still in demand is a testament to the high regard and affection felt by the literate public toward Fowler himself. What Fowler knew and preached was that before we could presume to be literary artists or journalists or even authors of readable letters we must of necessity, if we are to be effective, be craftsmen. Central to his purpose was the belief that the right word in its proper place and context constituted the backbone and much of the muscle and sinew of forthright and effective writing. That belief along with Fowler's celebrated passion for the concise and the correct, and his intolerance of ignorance and humbug, coupled with his sometimes incomparable expression, long ago won him the undying respect and admiration of careful writers of the English language the world over.But this is something of a problem. Since Fowler last set pen to page some seventy-one years ago (he died in 1933), the English language has changed and grown enormously. What was correct and effective then, as

Published by Thriftbooks.com User , 20 years ago
The idiomatic use of the English language needs a referee, and some referees are simply better than others. The "anything goes" motto of our times gives us uneven, illiterate, and occasionally brutal prose. This book helps block this inevitable slide into the lack of clarity and coherence. This second edition (cf., Third Edition) of "Modern English Usage" may strike some readers as arcane and archaic, because it is so restrictive in its prescriptions. Given the laxity of many our writers, the use of a strict disciplinarian in philology is a welcome resource.

Published by Thriftbooks.com User , 21 years ago
There is of course more than one reason for its popularity. But the dominant one is undoubtedly the idiosyncrasy of the author, which is revealed to an extent unusual in a 'dictionary'. -Sir Ernest Gowers, Preface to the Revised EditionHere in the States we have our beloved Strunk & White to give us guidance on matters grammatical, and it remains an indispensable reference work, even in its original form. The British counterpart to Elements of Style is this unique work by H.W. Fowler, minimally revised and edited by Sir Ernest Gowers. It too remains useful, though many entries have grown dated, but it is so idiosyncratic and amusing that even the most obsolete of Fowler's rulings and admonitions are worth reading if for nothing more than simple amusement. Here are just a few of the more enjoyable ones that I found : continental. 'Your mother,' said Mr. Brownlow to Mr. Monks in Oliver Twist, 'wholly given up to continental frivolities, had utterly forgotten the young husband ten years her junior.' This use of continental reflects the common belief in England that the Continent, especially France, offers unwonted opportunities for gaiety and self-indulgence. It persists in such expressions as c. Sunday, c. cabaret, now not necessarily in the pejorative sense intended by Mr. Brownlow but suggesting either envy or reprobation, or a mixture of both, according to the taste of the user. Such feelings toward what we suppose to be the continental way of life have no doubt changed with the mellowing of Victorian prudery, but are unlikely to disappear so long as we are not allowed to gamble where we please or to drink whenever we are so disposed. paragraph. The purpose of paragraphing is to give the reader a rest. The writer is saying to him: 'Have you got that? If so, I'll go on to the next point.' there can be no general rule about the most suitable length for a paragraph; a succession of very short ones is as irritating as very long ones are wearisome. reactionary. 'Except for its technical scientific sense, to which it would be a mercy if it were confined, reactionary is a word so emotionally charged as to be little more than a term of abuse' (Evans). That is no less true of Britain than of America. The word derives its pejorative sense from the conviction, once firmly held but now badly shaken, that all progress is necessarily good. split infinitive. The English-speaking world may be divided into (1) those who neither know nor care what a split infinitive is; (2) those who do not know, but care very much; (3) those who know and condemn; (4) those who know and approve; (5) those who know and distinguish. 1. Those who neither know nor care are the vast majority, and are a happy folk, to be envied by most of the minority classes.As Sir Ernest says in the epigraph to this review, that's not a style we're used to finding in dictionaries.Meanwh

Published by Thriftbooks.com User , 23 years ago
Excuse the superfluous capitals. Fowler/Gowers 2nd Ed. is quite brilliant; learned and full of humour. It successfully walks the line between descriptive and prescriptive grammar (with perhaps a tendency to over-emphasise prescriptive). The 1st Ed. was too stuffy; the new 3rd Ed. does not come close; indeed it is far too tolerant of the monstrosities so frequently heard today. My favourite bedside book by a long way.
Trustpilot
Copyright © 2022 Thriftbooks.com Terms of Use | Privacy Policy | Do Not Sell or Share My Personal Information | Accessibility Statement
ThriftBooks® and the ThriftBooks® logo are registered trademarks of Thrift Books Global, LLC