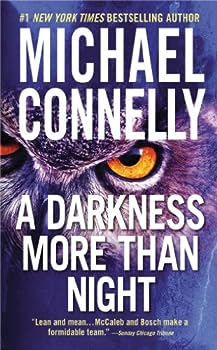 A Darkness More Than Night (A Harry Bosch Novel, 7)

LAPD Detective Harry Bosch crosses paths with FBI profiler Terry McCaleb while investigating the murder of a Hollywood actress.Harry Bosch is up to his neck in a case that has transfixed all of... This description may be from another edition of this product.

Connelly Continues to Crank 'Em Out

Published by Thriftbooks.com User , 21 years ago
I discovered Michael Connelly last summer and tore through his Bosch series in a couple of weeks. It quickly became one of my favorite detective series. I had read The Poet prior to these books and finally made the connection. I was a little worried when I got to Blood Work and Connelly departed from good old Hieronymus and took up with Terry McCaleb as his protaganist...but the storyline with the detective investigating the murder of the donor whom he received his heart from was too delicious to pass up. Now, in A Darkness More Than Night, Connelly makes the brilliant move of pairing these two characters up in more than just the passing manner of prior stories. Even Jack McEvoy from The Poet makes an appearance. The strength of this book is web of characters and events that fans will remember and enjoy. If you haven't read Connelly before, you might enjoy this book even more by starting the series from the beginning (The Black Echo) and watching the pieces fall together...but I suppose you could read this book alone and still be gripped by the storyline. The plot is yours to discover, but I will say that the darkness that seems to seep into my favorite detective makes the possibilities suggested by the twisting discoveries of McCaleb more than a little disconcerting. This is a guaranteed hit.

Published by Thriftbooks.com User , 21 years ago
Michael Connelly outdoes even his magnificant reputation with A DARKNESS MORE THAN NIGHT. A cast of characters from his previous works team up for a near perfect mystery. Terry McAleb (Blood Work) is asked by Jay Winston to investigate a grisly murder that looks to be the first in an eventual series. Through his gritty detective work and outstanding profiling his pegs a sure fired suspect.....the problem is that the suspect is the infamous Harry Bosch (Black Echo, Angel's Flight, etc.....). Each piece of evidence points to Bosch and throughout the book the reader is forced to ask "Did Bosch go over the edge?". All the while, Bosch himself is in the middle of a tedious trial of a Hollywood murder. Other familiar characters in the Connelly world show up including reporter Jack Mcevoy (The Poet). Therefore it may help to have read previous Connelly novels to gain the full efect of this work.The book is a non stop piece of intrigue. Once picked up it beckons the reader to keep going until the masterful ending. There are no dull moments and the characters of Bosch and McAleb feed off of eachother. There are bad guys worthy of your spite and good guys with the weaknesses that are a Conelly trademark. Is Bosch a fallen heroe? Has McAleb missed the mark on this profile? Will the killer strike again? All of these questions run through the course of the brilliant five star fiction.

WHAT A SEDUCTIVE READ! WHAT A BRAVURA PERFORMANCE!

Published by Thriftbooks.com User , 21 years ago
It's double trouble and a double treat for fans of mystery master Michael Connelly when he pairs two of his compelling protagonists - LAPD Detective Hieronymus Bosch ( "The Black Ice," "The Concrete Blonde," etc) and Terry McCaleb ("Bloodwork"). The duo serve up surprises and shocks in this tale of murder and mayhem Hollywood-style. Michael Beck, who has read several of John Grisham's classics, delivers a blockbuster performance in this riveting encounter with a movie director accused of murdering an actress. LA is, of course, agog, clamoring for details. The trial transfixes as Bosch, who was the arresting officer, is also a star witness. He goes mano a mano with McCaleb who has a different take on the crime. As the complexly plotted drama unfolds it seems that what may be the conclusion is too outre, too incredible to consider. What a pair of crime busters! What a seductive read! What a bravura performance!
Trustpilot
Copyright © 2022 Thriftbooks.com Terms of Use | Privacy Policy | Do Not Sell or Share My Personal Information | Accessibility Statement
ThriftBooks® and the ThriftBooks® logo are registered trademarks of Thrift Books Global, LLC