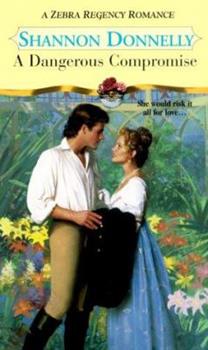 (Book #2 in the Compromise Series Series)

This description may be from another edition of this product. "Delicious, delightful, and devilishly good reading..." -- Emily Hendrickson, author of The Rake's RevengeReformed rakes make the best husbands--or do they?The beautiful and willful Clarissa is on the...

Published by Thriftbooks.com User , 20 years ago
Shannon Donnelly has done it again! She's written a really brilliant sequel to her first book, "A Compromising Situation." "A Dangerous Compromise" is a rich and complex book, and quite a bit darker than the usual fare. For while this book is primarily about a young girl's very first foray into the social swirl that is the London Season, it is not the light hearted romp you might expect it to be. For Clarissa Dewhurst, the beautiful heroine at the heart of this novel, is a young woman full of doubts, questions and fears, and a rather foolish quest that is bound to land her in trouble. Somehow she's gotten it into her head that she can only find fulfillment and peace if she experiences a Grand Passion. And, she believes, only a rake can provide her with this Grand Passion. So, Clarissa has come to London in order to find her rake, make him fall in love with her, and the reform him. And when she finds out that her best friend's (Jane Preston) brother has plans of promoting a match between Jane and his best friend, Evan Fortesque, Clarissa is outraged and urges Jane to reject Evan, esp as this Evan Fortesque is not a rake, and is probably as boring as he is respectable.Unfortunately, Evan overhears Clarissa's dismissive comments about him. Evan has spent the past few years taking care of his family estates and his family, and he is now in London for a well deserved holiday. And when he overhears Clarissa, he decides to teach her a lesson by presenting himself as a rake, and showing her what a rake is truly like, and how dangerous he can be. However Clarissa truly does fascinate him: she's an audacious mix of vulnerability and willful stubbornness, and Evan finds himself constantly stepping in to protect her form her own folly. And after a while, the reason he constantly seeks her out, whether it is to teach her a lesson or if it is because he cannot stay away from her, becomes completely mixed up in his mind. And then Clarissa attracts the attention of a true rake, St. Albans. Suddenly Evan finds himself flirting in earnest with Clarissa in order to make sure that Clarissa does not fall under St. Albans's spell, and in order to keep this very fascinating young lady for himself. But what will happen when Clarissa discovers that Evan is not the rake she thinks he is?Plot-wise, "A Dangerous Compromise" is very straight forward read. However the reason to read this novel lies in the complexities of the characters depicted in this novel. To begin with there is Clarissa Dewhurst: is one of the most complex of young romance heroines I've ever come across -- mercurial in her humours, willful and stubborn; she is also generous and loyal, and very vulnerable. The bleak insights that Shannon Donnelly provides us with about Clarissa's childhood and her parents makes us empathise with this very bullheaded heroine, and hope that she discovers what she is TRULY looking for before it is too late. It also successfully explains her rather twisted fixation on finding
Copyright © 2020 Thriftbooks.com Terms of Use | Privacy Policy | Do Not Sell My Personal Information | Accessibility Statement
ThriftBooks® and the ThriftBooks® logo are registered trademarks of Thrift Books Global, LLC