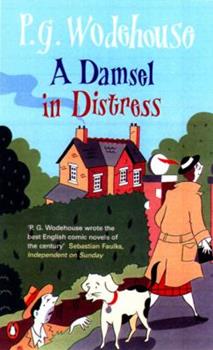 A Damsel in Distress

A damsell in distress - an Almost Blandings novel set in Belphi Castle, Hampshire and a two week house party for the son-and-heir's 21st.

Wodehouse is just what the Doctor ordered!

Published by Thriftbooks.com User , 13 years ago
Oh Mr. Wodehouse! One of the finest witty wordsmiths who ever picked up a pen. When I need a smile, or a lift, or even a roll on the floor laugh I turn to one of the many wonderful works of Wodehouse. So many to choose from, and each one is from a different period in PG 'Plum' to his friends - life. While my favorite character is Psmith, how can I not enjoy the mutterings of Ukridge, or long to have my life saved from disasters by the likes of Jeeves. Stephen Fry wrote 'Without Wodehouse I am not sure I would be a tenth of what I am today...his writings awoke me to the possibilities of language. His rhythms, tropes, tricks and mannerisms are deep within me. But more than that, he taught me something about good nature. It IS enough to be benign, to be gentle, to be funny, to be kind. As laughter is the best medicine, perhaps we need a good dose of Wodehouse from time to time, and during these bleak winter months, in the dark time of the economy, Wodehouse is just what the Doctor ordered!

You'll love a Damsel in Distress

Published by Thriftbooks.com User , 13 years ago
I grew up on British Comedy....and once I found Jeeves and Wooster I was in heaven....once I realized that there were so many other great Wodehouse novels I eagerly devoured them all! A Damsel in Distress is typical Wodehouse! Wit, eccentrics and a wild plot that all comes together in the end. A smile in each paragraph and a laugh on each page!

British Humour at its finest

Published by Thriftbooks.com User , 14 years ago
Belpher Castle, home of widowed Lord Marshmoreton. Both his children Percy and Maud, in their twenties, and his sister, Lady Caroline, along with her step-son Reginald, live at the castle, surrounded by their faithful butler Keggs, page-boy Albert and several other servants. Maud is desperately in love with an American young man whom nobody has ever met and Lady Caroline, her aunt, resents and rejects the whole affair as it does not suit the family's aristocratic position, plus she wants her to marry Reggie, her step-son. Lord Marshmoreton, Maud's father, is actually more interested in his garden rather than in any direct involvement with his daughter's scandalous love "emergency" shall we say, but is forced to face the facts by his sister Caroline, who rules the castle (and tries to rule all their lives too) with an iron-fist hidden beyond her aristocratic subtle tones and smile. George Bevan is an American composer in town with his show and in a case of mistaken identity, his life becomes muddled up with Belpher Castle and its inhabitants. Firstly published in 1919, this comedy of errors is a classic and makes you laugh out loud to this day. Simply delightful British humour by the unforgettable P.G. Wodehouse.

Published by Thriftbooks.com User , 20 years ago
George Bevan, burgeoning young american musical composer, fancies himself a knight-in-shining-armor when in the middle of Piccadily Circus a fair maiden flings herself into his cab to escape the obese pursuit of the dragon - her brother Percy, heir to the family title and vigilant protector of the family name. Our hero's fair lady Maud does indeed live trapped within the tower of Castle Belpher to which he repairs in swift pursuit of happiness.George will face grim prospects in scheming servants, an evil aunt, a kindly but aunt-dominated Lord Marshmoreton and worst of all the fact that Maud is in love with another. The whole setting has obvious similarities to Blandings for those familiar with the Lord Emsworth stories. I wasn't roaring with laughter, but I was attached to the characters and couldn't put the book down. It is hard to say which book is a good introduction to Wodehouse because they are all so good!

Published by Thriftbooks.com User , 22 years ago
This was my first Wodehouse and one of my absolute favourite books. A dream of wonderfully comic characters, from the preoccupied Earl of Marshmoreton, sulky Lord Belpher, radiant Lady Patricia (aka Maud) and all-round good guy George Bevan, as well as a bevy of funny support characters (like the house staff who make bets on the romantic attachments of the inhabitants). Utterly delightful, with laugh-out funny scenes throughout. If you haven't read this, you're missing out!
Trustpilot
Copyright © 2022 Thriftbooks.com Terms of Use | Privacy Policy | Do Not Sell My Personal Information | Cookie Preferences | Accessibility Statement
ThriftBooks® and the ThriftBooks® logo are registered trademarks of Thrift Books Global, LLC