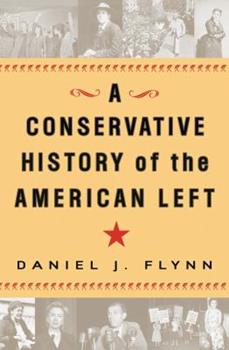 A Conservative History of the American Left

From Communes to the Clintons Why does Hillary Clinton crusade for government-provided health care for every American, for the redistribution of wealth, and for child rearing to become a collective obligation? Why does Al Gore say that it's okay to "over-represent" the dangers of global warming in order to sell Americans on his draconian solutions? Why does Michael Moore call religion a device to manipulate "gullible" Americans? Where did these radical...

Not a "right wing diatribe"

Published by Thriftbooks.com User , 13 years ago
This is a book for anyone who is sincerely interested in learning about hard core left wing ideology and left wing social engineering. For open minded people who are interested in understanding what it means to take care of people's every need, imagined or real, as a way to control them. Better to be free and have to pay for your own healthcare than get services for "free" but have no liberty. Flynn is an intelligent writer, does not engage in name calling, and presents a reasoned and accurate history of the left.

Published by Thriftbooks.com User , 13 years ago
I checked this book out from the library too but wouldn't mind owning it. Not because it's a conservative book but it does offer insight and a valid alternative to conventional wisdom about American reformists, progressives, and American history. It is loaded with information about American history in light of the Leftist movements dating back to the early 19th century. Some of that early history seems a little sketchy compared to the author's writing about the 20th century Left, but then again, the 20th century was probably had much more supporting documentation anyway. To anyone who may read this, this book does not dismiss American ideals or idealism in general, but rather shows how badly corrupted many reform and progressive movements become. Mostly though, it is about the reckless leaders of these movements who created so much havoc within their groups and the country as a whole. They have repeated mistake after mistake as though they were genetically programmed for disaster. I can guarantee that anyone with an open mind will learn a great deal after reading even half of this book. The author's writing style is very easy to read and comprehend. But don't think this is just another conservative book trashing the Left. It's very well researched.

Published by Thriftbooks.com User , 13 years ago
A Conservative History of the American Left is a terrific book bearing a title that will, unfortunately, keep the very people who need to read it from doing so. As other reviewers have asserted, Daniel Flynn's work is highly readable and very difficult to put down. I thought I already knew much about many of the figures, groups and events covered and yet Flynn continually surprised me with interesting revelations - many of them tiny - and new insights. History offers many ironies and Flynn never seems to miss this point. Overall, A Conservative History of the American Left is both splendid history and great entertainment.

Published by Thriftbooks.com User , 13 years ago
With wit and insight Flynn traces the utopians who have longed to change society. Some were merely silly, some were mad, and some evil. Take the "strange men who founded" (p 47) the Harvard commune. One was a vegetarian who would eat apples one year, crackers the next. There was also a celibate who heard voices, a man once jailed for not bathing, and, of course, a nudist. What fun it must have been at dinner time. While some idealists were naifs, some were knew just what they were doing. Take Kinsey, whose "impact knew no bounds" (p 253) as a social scientist pushing for freer sexuality. He "shared his wife with co-workers" (p 254} and insisted that children, even babies, enjoyed sex. His source for this claim was pedophiles. I am not making this up. Then there was Margaret Sanger, a racist who pushed eugenics, a fact never mentioned in Planned Parenthood brochures. Or John Reed (whose life inspired the movie "Reds") who never met a revolutionary he didn't love, but who had a stone heart for the women he used and the masses killed by communists. By the 1960's the Left "had grown frustrated over the working class's refusal to adhere to the roles Marx" (p 267) wanted. The 60's nevertheless soon swarmed leftist Panthers, Weathermen, hippies, LSD, and agitation over the Vietnam war. Betty Friedan, a red diaper baby, announced that the home was a concentration camp, and the feminist movement was born. In the end, Flynn finds "this is a book more about dreams than about reality...Setbacks cause enthusiasts to repackage but never to reassess" (p. 371). Leftists continue to seek human and worldwide perfection. And, frequently, the rest of us have to clean up the messes left behind.

Published by Thriftbooks.com User , 14 years ago
I picked this book up a few days ago and was completely unsure what to expect. On the one hand, it had received mostly favorable reviews from relatively reasonable sources and was even being used as inspiration for an essay contest by YAF, meaning that it could not be completely barren. However, on the other hand, the title came off as dangerously polemical, which made me wonder whether the book would merely become a massive exercise in straw-manning along much the same lines as early liberal "histories" of the conservative movement. So it was with great anticipation tempered by a dose of skepticism that I opened the book. And I literally could not stop reading. This book is brilliantly written - scrupulously fair, extraordinarily perceptive and well-researched. In fact, the very first person I would recommend this book to would be Leftists - so long as they are the honest, self-critical sort who are willing to take a deep probing of their flaws. Whatever its title might lead you to believe, the book is not purely an exercise in conservative condescension to the Left (though the author does write with a wry, sarcastic tone which often comes off as condescending). Rather, Flynn spends much of his time simply telling the story of the Left, with a minimum of snide commentary (there are exceptions, such as his drippingly disdainful explanation of the ideas of Charles Fourier). This decision to write the book as a relatively disinterested storyteller was brilliant both aesthetically and polemically - the story itself is damning enough without snide comments to support it. Flynn depicts the Left's pastiche of failed experiments, delusional utopians and violent agitators in luminous, vivid colors, but though his brush strokes paint a harsh picture, it is conspicuously not the fault of the painter, for many of the hues he mixes into the picture make his subjects appear not as purely delusional lunatics, but as deeply flawed human beings. One finds oneself relating to some of the most infamous Left-wing bogeymen like Tom Hayden, Emma Goldman and John Reed even as one cringes at the vague, unrealistic and dangerous nature of some of their ideas. This is not to say that Flynn lavishes sympathy on everyone - his description of Huey Newton oozes with moral outrage, revulsion and contempt - but he only blasts a sparse few people, and tries to allow his readers to make up their own mind about the motives of his subjects. As such, the feeling one is left with upon finishing the book is not so much "what a boatload of nutcases" but "there, but for the grace of God, go I." However, this feeling is soon overwhelmed by a deep feeling of intellectual satisfaction as one ponders the truly impressive nature of Flynn's scholarship.
Trustpilot
Copyright © 2022 Thriftbooks.com Terms of Use | Privacy Policy | Do Not Sell My Personal Information | Accessibility Statement
ThriftBooks® and the ThriftBooks® logo are registered trademarks of Thrift Books Global, LLC