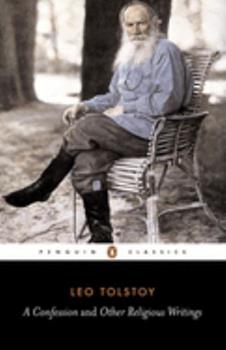 A Confession and Other Religious Writings

Tolstoy's passionate and iconoclastic writings--on issues of faith, immortality, freedom, violence, and morality--reflect his intellectual search for truth and a religion firmly grounded in reality. The selection includes 'A Confession, ' 'Religion and Morality, ' 'What Is Religion, and of What Does Its Essence Consist?, ' and 'The Law of Love and the Law of Violence.' For more than seventy years, Penguin has been the leading publisher of classic...

Published by Thriftbooks.com User , 14 years ago
To read this is to reveal the logic of a great thinker's enlightenment about the real science of Christ's thinking and healing even if under the cloud of domination of an establishment and state church. He was brave to write it out to the extent of his excommunication in 1905. It is a thought opener. Pertinent in thie time of growing spirituality and questioning of religion. Frederick R. Andresen, Author of "Walking on Ice, An American Businessman in Russia," over sixteen years in Russian business, six years in residence.

Tolstoy's ideal version of himself

Published by Thriftbooks.com User , 17 years ago
There are at least three Tolstoys. There is the Tolstoy whose mind and capacity for creation, whose ability to observe human life and transform it into the highest form of Literature- this is the first Tolstoy. The second Tolstoy is Tolstoy the man of appetite, the sinner who not only endlessly forced himself upon his wife but who took tens of peasant women for his own pleasure. The third Tolstoy is the would- be- saintly Tolstoy of the 'Confession'. This is the Tolstoy who longs for simplicity in life, for renunciation of wealth and sensual pleasure, for a kind of Christian- like total Love and Devotion to others. It is true that Tolstoy's greatest works were created before he wrote 'The Confession' And it is true that as his age his physical powers diminished somewhat. But both of those Tolstoys remained with him all his life even if in diminished form. And this third Tolstoy this holy character who nonetheless made his wife and some of his childrens' life a torment, he too persisted with Tolstoy to the end. Is this to say that the great man was a hypocrite? Yes, and more strongly 'no' He was an enormously complicated human being and a very great creator of Literature. If however to be judged in terms of his relations to the closest people in his life, sainthood would certainly have to be denied him.

Published by Thriftbooks.com User , 18 years ago
This book includes some of Tolstoy's essays written during his time of deep internal spiritual struggle. Upon his renunciation of a life of aristocratic wealth and worldly pleasure, Tolstoy longed for the sense of true peace that he saw in the peasant class. Thus he embarked upon a search for meaning and happiness through a life of simple faith, manual labor, and poverty. He formulated his own Christian philosophy based on Christ's Sermon on the Mount stressing the existence of the Kingdom of God within the human heart, civil disobedience, and total pacifism. This "law of love" is explored deeply in confessional form throughout the works in this collection. Although this particular approach to living the life in Christ ultimately did not cultivate in Tolstoy the deep inner peace that he yearned for, I feel that many of his ideas can be beneficial to people both within the Church as well as not. Regardless of the validity of his doctrine, it cannot be denied that this is an authentic, genuine, and very human confession of a man searching for God and the meaning of life on earth. Although I personally disagree with many of Tolstoy's points, I still hold his Confession to be a universal work that deserves a fair exploration by all who have ever felt a similar need for inner peace and true reconciliation with God.

Published by Thriftbooks.com User , 20 years ago
This is a very interesting book. Penned by one of the greatest writers in history, "A Confession..." by Leo Tolstoy provided me with great insight into his life, work, and relationships. I read this for a religion class in college and ended up keeping it. It is rather short and easy to read. Of interest to those who are seeking truth and those who have found it. It is fascinating to follow him thru his early religious experience, falling away from the church, and coming back to a unique faith in the end. Recommended.

Not as good as I had hoped

Published by Thriftbooks.com User , 21 years ago
Tolstoy was a tremondous writer and intense human being. I approached this work expecting a great deal, and while it was certainly very much worth the effort, it was not as good as I hoped it would be.After acheiving fame, fortune, artistic achievement, family and everything else that most people long for, Tolstoy had a philosophical crisis in which he searched for the meaning of life. This is his chronicle of his despair and search, which ultimately ended in his acceptance of a unique brand of Christian socialism (not to mention ascetisim, vegetarianism, pacifism, etc.,). However, I thought much of the book, especially its sections on philosophy, to be rather poor in quality: either too simplisitc or complex but very poorly worded and expressed. While this book is ok, if anyone wanted to know Tolstoy's later philosophy of life I would recommend his later short works of fiction such as The Devil, the Kreutzer Sonata, and the Forged Coupon. They are masterpeices, while this work is simply interesting.
Trustpilot
Copyright © 2022 Thriftbooks.com Terms of Use | Privacy Policy | Do Not Sell or Share My Personal Information | Accessibility Statement
ThriftBooks® and the ThriftBooks® logo are registered trademarks of Thrift Books Global, LLC