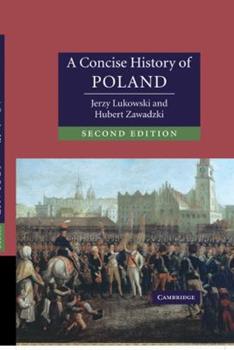 A Concise History of Poland

by Hubert Zawadzki and Jerzy Lukowski

The second edition of this guide to Poland has been updated to take account of the years from 1989-2005. This period marked its liberation from the Soviet Union, the birth of Poland's 'Third Republic' and, recently, its accession to the European Union in 2004. Poland's history has been marked by its resilience. Once a dominant force in central and eastern Europe and home to a remarkable experiment in consensual politics, it was excised from the map...

A Solid Overview of Polish History

Published by Thriftbooks.com User , 13 years ago
This book gives balanced detail to the different epochs of Polish history beginning with prehistory and ending with the fall of Communism. Many interesting facts are presented in this book. For instance, the Blessed Virgin Mary Church in Krakow was completed in 1397. (p. 52). In the 19th century, Russian revolutionaries Herzen and Bakunin supported the resurrection of the Polish state. (p. 163). In 1909, the Boryslaw-Drohobycz oil fields accounted for 5% of the world's oil production. (p. 162). Finally, Kiev had a large and thriving Polish intelligentsia as recently as 1917. (p. 164). Some writers have claimed that Marie Curie-Sklodowska, following her move to France, increasingly distanced herself from her Polish heritage. In apparent refutation of this, the authors point out that Curie always maintained close contact with Poland, and was instrumental in establishing the Radium Institute in Warsaw in 1932. (p. 163). This was shortly before her death. During the interwar period, popular illiteracy was reduced from 33% to 15%, and mortality rates were cut in half. A modest beginning was made in mechanization. In 1939, Poland had 2,000 tractors compared with France's 30,000. (pp. 221-222). (Of course, much agriculture all over Europe at the time was still non-mechanized). A unique aspect of this book is its detailed list, in the back, of all of Poland's rulers, beginning with the dynasties. The list includes foreign rulers of Prussian-occupied, Austrian-occupied, and Russian-occupied Poland, as well the Communist rulers of Poland in the 20th century. There is even a listing of leaders of the Polish Government in Exile in London, which existed in the years 1939-1990.

Published by Thriftbooks.com User , 14 years ago
This is beyond a doubt the best history of Poland I have read so far (and I run a website on Polish History). It is concise yet detailed enough for any reader or for the curious. There are fascinating facts that one does not come across in any of the other histories which add to the general background and it is written in a eminently readable fashion. Lukowski is a very familiar name amongst students of Polish History - his account of the Partitions is a classic and the partnership with Zawadzki makes me want to read that historian's work also. I cannot recommend this book enough. If you want a History of Poland then this is the definative version.

Best concise history so far-Better than the usual myths

Published by Thriftbooks.com User , 18 years ago
In contrast to the usual myths, it is such a pleasure to read a more honest historical account written by two ethnic Polish writers, now, after many decades of war propagandas. As the authors of this book state: 'The 20th century has added its own myths ...after the Second World War, Polish historiography was want to depict a 'Piast Poland' whose boundaries were curiously congruent with those of the post 1945 state'. James Michener's book 'Poland' (claiming that Poland should have rightfully conquered Prussia), is also one of those myths perpetuating fictions. Michener, a fiction travel writer gentlemen, was taken in by his charming hosts, during the Communist Polish government, while writing his book. Some people take his fantasy book 'Poland' as factual history of Poland. In contrast the two authors of this book, Jerzy Lukowski and Hubert Zawadzki have done some factual research. High time that this 'Concise History of Poland' was written and published.

A great overview of Polish history

Published by Thriftbooks.com User , 18 years ago
If you have no knowledge of Polish history, this book is a good place the start. The authors recommend Playground of the Gods if you are looking for a more detailed history of Poland, but I haven't read those yet so I can't "offically" recommend them.This book covers basic events and ideas that occured in Poland for the past 1000 years. In addition to politics and military events, the authors attempt to list cultural figures, such as Chopin, and how those figures reflected or affected Polish events.There were few details on events most people normally think about when they think of Poland, such as concentration camps and WWII. However, these issues aren't ignored entirely, just given the same coverage as other events in Polish history.
Copyright © 2022 Thriftbooks.com Terms of Use | Privacy Policy | Do Not Sell My Personal Information | Accessibility Statement
ThriftBooks® and the ThriftBooks® logo are registered trademarks of Thrift Books Global, LLC