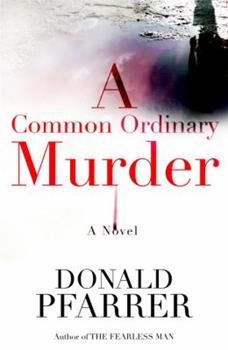 In the Chicago Tribune , Alan Cheuse described Donald Pfarrer's novel The Fearless Man as "the gold standard for any other fiction to come out about the [Vietnam] war." Now, in this new novel, Pfarrer presents another kind of war, the one in America's streets, with the same kind of excitement, style, and power. Steven McCord, a lieutenant of police in a fairly large midwestern city, has been coarsened by twenty years' exposure to violence and cruelty...

Published by Thriftbooks.com User , 13 years ago
This is a great book. All the main characters have been fully-developed and the climactic scene is vividly described. I usually enjoy Raymond Chandler and Walter Mosley murder-mysteries and found this book to be up to their high standards.

A Common Ordinary Murder is a complex, exceptional story

Published by Thriftbooks.com User , 14 years ago
Donald Pfarrer may not be well known yet. But if he continues to write more books like his acclaimed THE FEARLESS MAN and his current A COMMON ORDINARY MURDER, then fame and fortune are inevitable. His themes are complex, and his writing style accommodates the depths that he explores. Fairness, justice, love, responsibility, devotion and self-awareness are neatly woven into this exceptional story. The novel opens with the thoughts and actions of an old man who has begun to lose touch with reality. His musings slip from past to present and are interspersed with his trying to remember what his reason was for shaving today. Before long, Charles Carden becomes the victim of a homicide that is known in cop talk as a COM, a common ordinary murder. But, when police lieutenant Steven McCord begins to investigate, it moves up several notches and reveals a double homicide with brutal circumstances. Steven McCord is a 20-year veteran of the city's police department and, at age 42, finds himself weary of all the misery and despair he has seen. He is studying law and hopes to become a successful attorney, leaving behind the crime-filled streets. Those closest to him cannot understand why he would give up a pending promotion to Captain for an uncertain future as a defense lawyer. His wife Nora is his best friend, as well as the love of his life, yet her most logical reasoning cannot dissuade him. Nor can the ranting of his former mentor and now good friend, Gil Hughes, who never minces words with his former rookie, now his boss. To add to his building angst, McCord finds himself hopelessly drawn to a younger woman who he met briefly at a party. In typical detective fashion, he learns who she is and where she lives. He stands outside her building and waits to catch a glimpse of her. He ponders, and agonizes over his thoughts. He is torn between what he wants and what is right. He has everything, including a wife who loves him like no one else ever has and who he loves in return. But obsession trumps reason every time, and he continues making dangerous choices. Meanwhile, McCord is still searching for the murderers in the COM. Painstaking steps lead him to the identity of one of the pair, and he choreographs a perfect sting that will eventually lead to an arrest. Yet, once again, he is faced with a choice. His inner man is preparing himself to exact swift, street justice while his conscience tries to pull him in the right direction. The combination of morality play and police procedural is compelling and a bit out of the norm in this age when a walk in the park can lead to a roll in the hay. If you enjoy reading a book that provides food for thought and conversation, then A COMMON ORDINARY MURDER will do so in spades. --- Reviewed by Maggie Harding

Published by Thriftbooks.com User , 14 years ago
This is a novel of extraordinary power, that seizes the reader from the first page and compells us to care about its central protagonist, a police officer struggling with a mid-life crisis as he investigates a terrible crime. Donald Pfarrer's characters -- Police Lt. Steven McCord, who moonlights as a law student and falls hard for a nurse he barely knows; his wife, Nora, who has risen at city hall without losing her intense Catholic faith; Charles Carden, an elderly lawyer haunted by his experience of war -- are all wrestling with the big questions: life, death, love, marriage and infidelity, faith and the loss of faith, the human capacity for courage and brutality. But they are also rooted in a tautly-written narrative of fierce suspense and vivid, evocative detail. Not your common ordinary crime novel.
Trustpilot
Copyright © 2022 Thriftbooks.com Terms of Use | Privacy Policy | Do Not Sell My Personal Information | Cookie Preferences | Accessibility Statement
ThriftBooks® and the ThriftBooks® logo are registered trademarks of Thrift Books Global, LLC