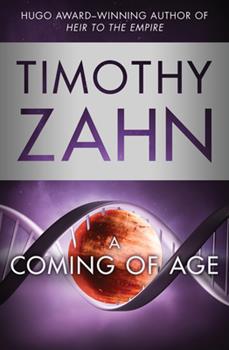 A Coming of Age

The children of Tigris have extraordinary telekinetic gifts--but are these special powers a blessing or a curse?On Tigris, children develop telekinesis beginning at the age of five. By the time they're pre-teens, though, their special abilities peak, then slip away as they reach maturity. Being able to "teek" gives them power--even over most adults--until they gradually become regular teenagers, no longer special, no longer with authority and status...

Published by Thriftbooks.com User , 15 years ago
As I have mentioned previously, Timothy Zahn is my absolute favorite author. I first read his works with Heir to the Empire (Star Wars: The Thrawn Trilogy, Vol. 1) and have continued to enjoy his non-Star Wars books. As a mini-goal, I have decided to read all of his works. This was another of his older works that I picked up in a used bookstore. Plot: The planet Tigris is strange not necessarily for its flora, fauna, or alien life. Something about the planet has bestowed a "gift" upon anyone between the ages of 5 and puberty--telekinesis. This "gift", however, quickly turned into a curse during the Lost Generation, in which much technology was lost. Since then, society has changed to reign in the children who have this ability to "teek" anything they see or touch. Lisa Duncan is a preteen (actually 14, but she hasn't yet reached puberty) who is not looking forward to losing her gifts in Transition. So, she decides to get ahead on some schooling and learn how to read. However, this proves to be a serious error and leads her into much trouble. Meanwhile, a scientist, Dr. Matthew Jarvis, kidnaps a 5-year old orphan boy and starts some break-through experiments on him that could uproot the entire Tigrin society. Stanley Tirrell and his righthand, Tonio, a preteen, rush out to find the lost boy and to keep Dr. Jarvis' discovery from falling into the wrong hands. Good: Wow! I was not exactly looking forward to reading this book just because the concept didn't sound that interesting. But as I started reading, the story drew me further and further in. I felt Lisa's pain at seeing her childhood come to a close. I understood her actions to try to "get ahead" of the crowd. I also cheered on Tirrell and Tonio as they slowly picked their way through the rubble of the mystery. Besides pretty interesting characters (namely Lisa Duncan and Tirrell in a smaller sense), the story is awesome. Timothy Zahn creates this world without spending pages upon pages of boring history lessons. He retells it only as necessary and convinces me as the reader that the characters know their history and don't feel like they have to regurgitate it for the audience to understand what is going on. There is enough action towards the end to grip the audience. You are never quite sure who will win in the end. Bad: Very minimal. The language was quite intense, which was quite unlike Zahn. Also, the villain, Omega, was rather dry, certainly nothing like his villain, Thrawn. Dialogue/Sexual Situations/Violence: A lot of da**, he**, and sh**. Mention is made of a sexual relationship between two teens and the kidnapped child is illegitimate. The Lost Generation wrought havoc on society 200 years previously. Omega is not afraid to use children and their teekay power to harm others. Overall: Impressive! Most impressive! For a book that I thought would be dull, this kept me very entertained. Give it to Timothy Zahn to pull off another good book!

Published by Thriftbooks.com User , 19 years ago
A Coming of Age has an interesting twist not seen in many Sci Fi novels, the fact that the children of the Planet are more powerful than the adults, in physical prowess at least, is quite interesting. His prose is quite good, if the villain is rather boring, and several plot changes make for a good ending.

Published by Thriftbooks.com User , 20 years ago
I'm going to have to go with a five-star rating here despite the fact that it's a four-star kind of book; light reading that's not going to change your life. But the thing that's so special about this book is that I'd uphold it (particularly the first chapter) as a how-to for sci-fi authors: it's a great example of how to create a unique world without having to stop and (directly) explain things to the reader. I don't think Zahn ever states outright that "teekay" stands for telekinesis (TK), he just uses the phrase in context enough so the reader can figure it out within a few pages. The same approach is emplyed throughout the book - we eventually learn what we need to know in order to understand the story about the setup and history of Tigris, but it's blended seamlessly into the narrative and never feels like an interruption.The narrative itself is interesting, if not brilliant. Per usual with this author, we get very competent prose and intelligent, likable protagonists. There are a few flaws here: the villain is pretty bland, the storyline is only barely strong enough to last 300 pages, and there're a few plot contrivances here and there. Plus for the first half of the book one basically has to take the author's word that the different story arcs have anything to do with each other. But since I've spent two whole sentances on flaws, I'll also have to mention that Zahn does a good job with most of his characters; I particularly liked the kids, Lisa and Tonio. And the central concept is a nice twist on the old "magical power that comes at a certain age" cliché.I'm not an expert on Timothy Zahn - until about a year ago I only knew his Star Wars stuff - but I'd highly recommend A Coming Of Age along with any other Zahn you can find, since everything I've read so far from this guy has been top-notch.

Published by Thriftbooks.com User , 20 years ago
Zahn pulls his usual mix of action and plot twists, though perhaps not quite as elegantly as in his later work. I enjoyed this book thouroughly (not quite as much as the Thrawn books, but it is better than Icarus Hunt) as it gives the reader insight into the child - adult power struggle as well as being a cracking good story. It's a book with thought put into it.
Trustpilot
Copyright © 2022 Thriftbooks.com Terms of Use | Privacy Policy | Do Not Sell or Share My Personal Information | Accessibility Statement
ThriftBooks® and the ThriftBooks® logo are registered trademarks of Thrift Books Global, LLC