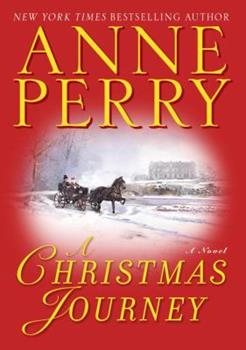 Readers of Anne Perry's bestselling suspense novels revel in a world that is all their own, sharing the privileged existence of Britain's wealthy and powerful elite in West End mansions and great country houses. It is also a world in which danger bides in unsuspected places and the line between good and evil can be razor thin. This new novel features Lady Vespasia Cumming-Gouldone of the most memorable characters from the Thomas Pitt serieswho appears...

Published by Thriftbooks.com User , 17 years ago
"A Christmas Journey" is more than a mystery and more than a Christmas story. All Anne Perry fans should put aside their usual expectations of a Pitt-Monk type mystery, and simply sit back and enjoy a story about Vespasia, including a reference to her married status and an unfulfilled love affair.There is no need to flesh out characters, because that's not the point of the story.It is, rather, a story with devastating insights into English upper-crust manners and, more importantly, into the meaning of faith,friendship, and a touch of perseverance.

Published by Thriftbooks.com User , 17 years ago
Just in time for Christmas, for the fans of the Thomas and Charlotte Pitt mystery series, Anne Perry has constructed a delightful Victorian mystery featuring one of its more interesting characters, Lady Vespasia Cumming-Gould.Lady Vespasia is entertaining her highborn friends at Applecross for a holiday weekend of games, good food and romance, when one of her guests commits suicide --- the victim of the waspish tongue of another. The group is stunned and outraged and demands some sort of revenge. At the urging of her good friend, Omegus Jones, Vespasia suggests to the somewhat less than recalcitrant harpy that perhaps she should atone for her foul deed with an unusual act of expiation. In front of the gathered group, she suggests that she should embark on the long and possibly dangerous journey to northern Scotland to inform the victim's mother of her daughter's sad demise. Not only that, but she should bring the grieving mother back to attend.In order to make certain this task of medieval origins is completed, Vespasia offers to accompany her friend on the journey. Vespasia, her friend, the victim and her mother are revealed to have secrets in their pasts that come to light as the journey progresses. Perhaps the suicide is something more than meets the eye.Perry spins a tale of intrigue lavishly adorned with Victoriana and moral conundrums. One almost wishes that expiation were a way of meting out deserved punishment in our times. --- Reviewed by Roz Shea

Published by Thriftbooks.com User , 17 years ago
This is a much shorter book than most of those from Anne Perry; it's a piece of light rewading for and about Christmas. The writer takes Aunt Vespasia, one the favourite characters from her Charlotte and Thomas Pitt series, and tells the story of one Christmas in her younger days. It isn't exactly a mystery story - a young woman commits suicide and her reasons for doing that seem obvious. But Anne Perry is master of digging beneath the obvious to find the truth beneath the truth.The result is a tale that flows from an elegant house party in a country mansion north to the frozen snowy wastes of Scotland (and Anne Perry lives in northern Scotland so we can assume she knows whereof she speaks). It's a pilgrimage of sorts, with Vespasia and her friend Isobel toiling through storms and snowdrifts to find the mother of the dead woman and, incidentally the truth behind the suicide.The only thing spoiling this good story is the overly moralistic tone that Anne Perry is increasingly becoming bogged down in. Of course you want characters with deep motivation - some pure, some mistaken, some evil - and the battle between good and evil always makes for good plot structure. But Anne Perry does tend to overdo it, leaving the reader wondering if she can stand being swamped beneath so many layers of virtue and morality.

A Journey of Discovery

Published by Thriftbooks.com User , 17 years ago
Anne Perry's memorable character, the indomitable Lady Vespasia Cumming-Gould, is the heart of this book. She is a young wife and mother, 30 years of age, attending a weekend house party at the home of her friend Omegus Jones. There Isobel Alvie, a young widow who is vying for the attention of an eligible bachelor, makes a cruel and cutting remark about Gwendolen, another young widow who would appear to be about to become engaged to him. The next morning Gwendolen is dead, an obvious suicide. Omegus proposes a medieval solution that could allow Isobel, who the guests find responsible for Gwendolen's death, to redeem herself. It will be a long and bitter journey in the cold of early winter to deliver Gwendolen's last letter to her mother, who lives in the north of Scotland. Vespasia, in friendship, offers to accompany Isobel. The journey is longer and much more difficult than anticipated, but the women persevere and meet another remarkable woman, Gwendolen's mother.The morals and mores of mid-nineteenth century England may seem strange and unusually strict to us, but Isobel and Vespasia must learn to live within those rules. As they travel, they share their thoughts and develop a true friendship. It is a journey of discovery for both of them, as they look deep inside themselves. I do agree with another reviewer that Vespasia dwells too much on her affair with Marco in Rome, but I assume that it is still a very recent occurrence, so that is understandable.What I do not understand, however, is Vespasia's willingness to leave her children, well cared for though they are, for long periods of time, first to go to Rome and again to travel to Scotland. Again, I suppose it is customary for the gentry and nobility of that era to do so. Nevertheless, it surprised and disappointed me.However, this is an excellent book which I highly recommend to all who love Aunt Vespasia and wish a glimpse of the young woman who became a great lady.

Published by Thriftbooks.com User , 17 years ago
With the London season over, Lady Vespasia Cumming-Gould like most of her peers is now looking forward to the Christmas holidays. Vespasia's husband is abroad on business and her children remain in London while she attends a party at Applecross, home of friend Omegus Jones. Vespasia feels good about life in general, but hers in particular as she reflects that her nation is prospering in the peace of the middle of the century though rumors fly that war in the Crimea is imminent.However, at a gala, Vespasia's friend Isobel Alvie's behaves is rather spiteful and nasty especially towards widow Gwendolyn Kilmuir. The next day, Gwendolyn is found dead, apparently having jumped off a bridge. Everyone blames the tragedy on acrimonious Isobel due to her cruel words so no one will talk to the "culprit" except Vespasia. A despondent remorseful Isobel accompanied by her only loyal friend Vespasia journey to Scotland to offer sympathy to Gwendolyn's mother where they will learn the truth behind the suicide and the true meaning of friendship.A CHRISTMAS JOURNEY may be a mid nineteenth century tale, but the deep messages remain valuable in today's society. The story line is kept from being light fluff by a strong cast especially the two lead women that brings to life the era yet also relates the true meaning of friendship "never fades" regardless. Fans of Anne Perry or just the time period will appreciate this charming holiday story.Harriet Klausner
Copyright © 2020 Thriftbooks.com Terms of Use | Privacy Policy | Do Not Sell My Personal Information | Accessibility Statement
ThriftBooks® and the ThriftBooks® logo are registered trademarks of Thrift Books Global, LLC