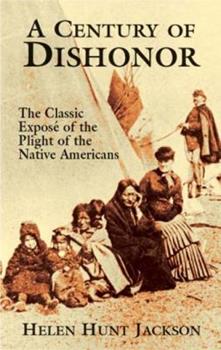 A Century of Dishonor: The Classic Expos? of the Plight of the Native Americans

Sharply critical of the United States government's cruelty toward Native Americans, this monumental study describes the maltreatment of Indians as far back as the American Revolution. Focusing on the Delaware and the Cheyenne, the text goes on to document and deplore the sufferings of the Sioux, Nez Perc , Ponca, Winnebago, and Cherokee -- in the process revealing a succession of broken treaties, the government's forced removal of tribes from choice...

Why buy the milk when you can get it free

Published by Thriftbooks.com User , 12 years ago
Not that many will be reading this (the last comment was made in 2002), but if you do a google search of the title you can read the original edition in a pdf format.

Published by Thriftbooks.com User , 15 years ago
Helen Hunt Jackson was a pioneer in the movement by "palefaces of conscience" for more humane treatment of the American "Indian". She (through her writings) was responsible for elimination of the worst abuses by the US Army and the Indian Bureau. This book (the capstone of her research) outlines the findings she made the original wording of treaties with various tribes and how the whites, not the Native Americans, had been the ones to abrogate the treaties. Anyone interested in justice for Native peoples needs to read this book. I found it hard to obtain through the library systems in the Philadelphia, PA area (and we have some of the best available). I highly recommend this for any citizen who considers themself informed.

Published by Thriftbooks.com User , 17 years ago
Like books written by Dickens and Hemmingway, this book is a classic. Written over a century ago, it describes actions and policies of the US and its people towards native Americans that are horrific, cruel and downright unamerican. Yet he who is ignorant of history is condemned to repeat it. In this case, even though the history was well documented in this book, we continued to repeat it through continued mistreatment. Helen Jackson's book is evidence that Americans knew what they were doing, knew that what they were doing was cruel and wrong and that they did it anyway.

Published by Thriftbooks.com User , 20 years ago
Bearing in mind that this book was written at the time when Native Americans were still "Savages" and totally responsible for all atrocities perpetrated in the west,in the eyes of the White Europeans, Helen Hunt Jackson made a brave stand in trying to educate these same people to the needs and requirements of the Native Americans.With each chapter given to a different Native American nation she tries, and in my opinion succedes,to make people understand the hopelessness the Native Americans found themselves in, and the only recourse they had was to fight to preserve their way of life, all too sadly with devestating consequences.Through each chapter the same theme occurs, the whites cheat,steal, murder, and abuse the Native American and very few Whites tried to correct these wrong doings, and the biggest offender the US Government, and even today the US Government do not appear to be too interested in the Native Americans.The book is "heavy going", and one can be forgiven in thinking, as they read through it, that I've been here before, because the facts are presented in the same way for every nation, but that notwithstanding, I feel this is a book that should be in anyones library who professes to have an interest in Native Americans.Yes Helen Hunt Jackson was a brave pioneer to voice her opinions in favour of the redman all those years ago, had more people listend, perhaps the Native American culture in all its glory would still be with us today.

4 1/2 stars, but a classic of permanent value

Published by Thriftbooks.com User , 20 years ago
This (unfortunately) timeless work is a scathing indictment of US Indian policy from independence until the 1880s. It includes a general treatment of bad-faith attitudes and policies, and a series of more detailed case studies of exceptionally egregious violations of legal treaties & human rights. It is timeless because of ongoing popular and official ignorance or lack of concern for American Indian rights, economic problems and indigenous culture---witness, for just one chilling example, the continuing imprisonment of Oglala/Anishinaabe activist Leonard Peltier, for murders he did not commit. Jackson was a pioneer activist for Indian rights, and commitment shines through on nearly every page. While it is true that her writing style may seem dated to some contemporary undergraduates, her subject's intrinsic interest holds the attention of any reader with more than a marginal interest in the topic. It is still useful for research purposes, though it is perhaps most valuable for history and/or anthropology courses on changing attitudes & policy toward Indians. In teaching about American Indian history, a main reservation about assigning it is the need to present what Indians themselves have said and/or written about their encounters with Euro-Americans. For a fine variety of views on these issues, see P. Nabokov ed, "Native American Testimony," and (among many other sources) memorable works by two premier Indigenous scholar-activists: Ward Churchill, "From A Native Son," and Vine Deloria Jr., "Custer Died For Your Sins."
Trustpilot
Copyright © 2022 Thriftbooks.com Terms of Use | Privacy Policy | Do Not Sell or Share My Personal Information | Accessibility Statement
ThriftBooks® and the ThriftBooks® logo are registered trademarks of Thrift Books Global, LLC