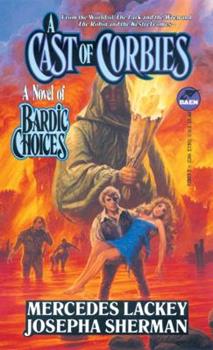 A Cast of Corbies

by Mercedes Lackey and Josepha Sherman

When representatives of Alanda's Church seek to ferret out unauthorized magic and music, the Free Bards--those who will not or cannot join the priest-condoned Guild--fight back.

Published by Thriftbooks.com User , 20 years ago
This is the third book in a series about the Free Bards. It takes place after book two, "The Robin & the Kestrel." It is desirable to read the earlier books first in order to understand the setting. Contrary to the advice of an earlier reviewer, you should not skip this book as it sets the stage for the following book. The king has outlawed street busking, causing the Free Bards and other street musicians to become creative in finding places to perform. By chance, Duke Arden of Kingsford is forming his own theatre company which presents an opportunity for Raven, Magpie, and their friends. However, an unknown enemy is trying to use sorcery to destroy the theatrical production. Various heroes and villains emerge as the story progresses. Lady Ardis, Justiciary Mage from book one ("The Lark and the Wren"), is reintroduced (she also appears later in "Four and Twenty Blackbirds"). The story reaches a blazing climax as various people are brought together by tragedy.

Published by Thriftbooks.com User , 23 years ago
I did not expect to like this book, and though I wasn't as drawn to it as I was the Valdemar books, I was soon trapped in a world of Bardic Choices. A great book full of magick, and the knowledge of what is allowed to happen when any one force tries to be in complete control.
Trustpilot
Copyright © 2022 Thriftbooks.com Terms of Use | Privacy Policy | Do Not Sell My Personal Information | Accessibility Statement
ThriftBooks® and the ThriftBooks® logo are registered trademarks of Thrift Books Global, LLC