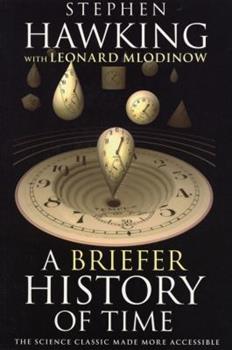 by Stephen Hawking and Leonard Mlodinow

This description may be from another edition of this product. FROM ONE OF THE MOST BRILLIANT MINDS OF OUR TIME COMES A BOOK THAT CLARIFIES HIS MOST IMPORTANT IDEAS Stephen Hawking's worldwide bestseller A Brief History of Time remains a landmark volume in...

Published by Thriftbooks.com User , 3 years ago
This book was a great addition to his original “A brief history of time” as he says in the book the only difference is the two added letters! It was condensed and more accessible to a wider audience with lovely illustrations!

Welcome to our universe

Published by Thriftbooks.com User , 15 years ago
A phenomenal description of the basics in physics and science. Hawkings new version is a tell all for Science beginners such as myself. After years of not understanding or not putting effort into understanding science I now have an excellent overview of why and how we exist. Definitely a great read!

Physics is fun, well at least it used to be.

Published by Thriftbooks.com User , 15 years ago
I listened to the audio version which is well produced and well read. Book vs. CD the material is the same (the audio version has text illustrations available on the last disk). Physics used to be a science that mere mortals such as you and I, could aspire too. Certainly you needed mathematical skill, but with hard work and a creative mind you could understand and study the physical world around you. This was the case until early in the 20th century when Relativity and Quantum theories arose. At this point the mathematics involved truly become difficult and esoteric to the point were only a relative handful of people proficient in such mathematics could understand and develop further theories. Additionally, as our knowledge expanded, sub-specialization in physics created a further segregation of the material where even only a smaller few could understood the nuance and intricacies of their specific field. In this milieu of high math and super specialization what is the curious lay person to do? Read Stephen Hawking! In his casual manner and efficient eloquent prose, he presents the current status of physics and cosmology such that you and I can actually understand the principles and theories. I will never understand the derivation of the theories but as Hawking explains I don't need to, through this book we do not become PhD students, simply guests at his dinner table discussing what he is thinking. What great minds like Hawking are thinking is infinitely more interesting than most other topics which come up at the average dinner table. Somehow just understanding what these giants are working on makes me comfortable in my relative ignorance, while I can never understand how they know, I can understand what they know. When I read the A Brief History of Time in 1988 I felt the same way and must admit at that time worried that Dr. Hawking would not live much longer due to the severity of his illness. It is very comforting that he and his mind and his desire to include and share with us his intimate yet wonderful knowledge of physics. He is among the select few that have the skill to educate the masses in science. Hawking, Sagan and Feynman benefit mankind not only with their science but with their dedication to teaching humanity. The brief bios on Einstein, Galileo and Newton were an unexpected bonus.

Published by Thriftbooks.com User , 15 years ago
I clearly remember when Stephen Hawking's first book, A Brief History of Time, came out in 1988. It was a great book that explained modern scientific cosmology in a way that I could really understand. That book became a worldwide bestseller, and with good reason! I still have my copy to this day. And now, some seventeen years later, Stephen Hawking is back with this new book. A Briefer History of Time brings the reader up to date, and makes the narrative even easier to understand. Even though I am a non-science-type guy, I found this book understandable. But even more so, I found it to be a very enjoyable read! I loved the way that the authors unfold scientific cosmology through the use of a historical narrative, explaining how man's knowledge of the universe expanded and changed, until we reach the modern theories. I found this book to be both interesting and enlightening, and expect it to do as well as the original. If there is one book that you simply *must* pick up and read this year, it is A Briefer History of Time. Get it today!

A Science Classic Now made Accessible to Everyone!!

Published by Thriftbooks.com User , 15 years ago
+++++ "In this book are lucid revelations on the frontiers of physics, astronomy, cosmology [the study of the universe as a whole], and courage [Dr. Stephen Hawking has ALS, also called Lou Gehrig's disease or motor neuron disease contracted when he was young and now is wheelchair bound]. This is also a book about God...or perhaps about the absence of God. The word God fills these pages. Hawking embarks on a quest to answer Einstein's famous question about whether God had any choice in creating the universe. Hawking is attempting, as he explicitly states, to understand the mind of God. And this makes all the more unexpected the conclusion of the effort, at least so far: a universe with no edge in space, no beginning or end in time, and nothing for a Creator to do." These are the words in the last paragraph of the introduction to Hawking's very first or original book "A Brief History of Time" (1988). These words were written by the late, great Dr. Carl Sagan. (In his introduction, Sagan calls Hawking a "legend.") Nothing has changed with this new book with respect to what Sagan says above. But as a reader of Hawking's first book, I did notice welcome changes. First, this new book is more concise. This does not mean this book is drastically shorter than the original. This new book is about twenty pages less than the original. Also this new book contains one more chapter than the original! What this book does is cut out extraneous technical detail from the original and focuses only on the most important concepts but still maintains the essence of the original. Thus, the book seems much more concise. Next, and this is very important, this book is more accessible. The important concepts mentioned above, I found, are explained much more clearly thus increasing this book's readability in order to achieve Hawking's (and collaborator Leonard Mlodinow's) goal: "to share some of the excitement of...[scientific] discoveries, and the new picture of reality that is emerging as a result." Third, this book is illustrated throughout with color illustrations. Actually, the original book was also illustrated but the new illustrations are, I feel, more easier to grasp. (I only have a complaint with the first illustration in this new book because it doesn't illustrate the point it's trying to make.) Finally, this book is actually updated with respect to the latest theoretical and observational results! For example, this book describes recent progress that's been made in finding a complete unified theory of all the forces of physics and describes the progress made in string theory (technically called superstring theory). Observational material comes from the Cosmic Background Explorer (COBE) satellite and by the Hubble Space Telescope. Thus, even though I read the original book, I still learned much from this book. As with the original book, this book contains a helpful glossary and an appendix briefly outlining the lives of Albert Einste

This book really makes you think

Published by Thriftbooks.com User , 16 years ago
This book takes on a nearly impossible task: explaining some of the most challenging questions facing theoretical physics--not to mention philosophers and theologians--today in a manner that everyone can understand. I'll admit that as a "non-science" type, some of this book went over my head. But it wasn't due to a lack of effort by the authors to keep things clear. In fact, the concepts that I found most difficult to follow were the most recent, least developed theories What I found most interesting about this book is that it leaves you thinking about how small a part of this universe we are and how improbable our existence is. This book inspires many more questions about our universe than it tries to answer. This is a great book to read and discuss with others as a result.
Copyright © 2020 Thriftbooks.com Terms of Use | Privacy Policy | Do Not Sell My Personal Information | Accessibility Statement
ThriftBooks® and the ThriftBooks® logo are registered trademarks of Thrift Books Global, LLC