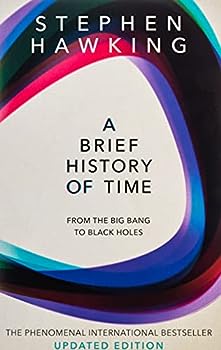 Brief History of Time: From the Big Bang to Black Holes

by Stephen Hawking and Ron Miller

This description may be from another edition of this product. #1 NEW YORK TIMES BESTSELLER A landmark volume in science writing by one of the great minds of our time, Stephen Hawking's book explores such profound questions as: How did the universe begin--and...

Published by Gabriel L Delatorre , 2 years ago
A great read from Hawking

Published by Thriftbooks.com User , 3 years ago
At first I was really skeptical if I should even read it, because I was afraid I wouldn’t understand or it would go over my head but I was wrong for the most part. Now there was this one chapter in the beginning where I couldn’t really grasp it, but after overcoming that the rest of the book was a good read! And I used to not read at all! Like I’d hate when they made us read in school, now I just realized it’s cause I wasn’t interested in simple stories.

The Original (has introduction by Carl Sagan and missing Chapter 10)

Published by Thriftbooks.com User , 14 years ago
For those who thought they knew the mind of God A Brief History of Time (ABHOT) has been with me since its first publication. I now feel, after nearly 20 years of it as a passive hobby, to be able to comprehend and explain what it means to me. It is a deeply personal voyage that I am most glad to have undertaken. Firstly to call this just a science book, a view I once held, is an understatement. It is both a scientific presentation and the exposure of the corruption of minds that submit completely to a mystery answer for mystery questions. You cannot separate the two in this book. They are interlinked by ABHOT's critic of the persistence of some members of mankind to maintain a wanton lack of knowledge. This armchair sufficiency in a mystery answer must be combated at all costs in order for us to stop denying that we possess a large brain. If we invoke the mystery explanation as the answer for anything then God just might as well have finished with the spinal cord which would have been enough for us. We are faced with the facts. Creation happened and we want to know how. Hawking knows how. Since this book deals specifically with theological questions and scientific ones it would be best to start with the theology problems posed by Hawking (the word God appears 40 times). Hawking claims that in 1981, at the end of a conference on cosmology organized by the Jesuits in the Vatican that they "...were granted an audience with the Pope. He told us that it was all right to study the evolution of the universe after the big bang, but we should not inquire into the big bang itself because that was the moment of Creation and therefore the work of God." Whether the Pope said this or not is up for debate (the Pope has made official declarations on this matter and they do not feature this element of non-inquiry) but Hawking thinks he knows how this God went about his business. The book builds up to the explanation of the universe starting with this critic of the Church in Chapter 8 - Origins and Fate of the Universe, which describes the history of time as we know it and gives the Church a nudge in the process. It is obvious that Hawking, strictly using the scientific method, describes the history of time without invoking God or a mystery. Hawking shows us that he knows things about how creation came about and that at no point is an intelligence being used to describe the cosmos. This veil, he believes, was removed long ago with Copernicus, Kepler, Galileo, Newton, Einstein and now once more by himself. This is not the first time the Catholic Church is featured in the book. It has a historical relationship with cosmology and a pretty poor one when it comes to Galileo who effectively ended the dark ages by reviving Greek mathematics and physics with an obvious fact that the heaven's change. The Church simply got this badly wrong whatever way you try to cut it (how can God's representatives get it so badly wrong?). The Earth is not the centre of universe. H

Published by Thriftbooks.com User , 14 years ago
Universally hailed as the greatest theoretical physicist since Einstein, Dr. Hawking serves as both an intellectual and physical inspiration. His disability - Lou Gehrig's disease- serves to make his every endeavor a slow and tedious affair, and yet his professional output remains very high, both in quality and quantity. This book is no exception. Written at the level of the layperson, it is clear, concise, and through. As the title suggests, he begins with the origin of the universe and progresses through the theoretical foundation for, and the evidence in favor of, the existence of black holes. Of particular interest is his thermodynamic analysis of black holes, showing that they too, obey the second law of thermodynamics. Combining the ideas of general relatively and quantum mechanics, he was able to show that a black hole is really not totally black; it does leak radiation at a rate inversely proportional to its mass. This debunking of the supposed "final fate of matter" once again shows that the universe "is stranger than we can possibly imagine." The only sad note occurs in the acknowledgements when Dr. Hawking explains the lack of equations by stating that every equation that appears in a book will cut its sales in half. This is an unfortunate comment on the degree of intellectual sophistication of the reading public. Published in School Science and Mathematics, reprinted with permission.

Modern Physics for the Layman and Everyone

Published by Thriftbooks.com User , 16 years ago
This is a wonderful book. It really explains many concepts of modern physics in layman's terms. Often we hear scientific words bantered about on various educational television programming without really understanding the concepts and theories behind them. This book goes into concise detail on quite a few topics and does a rather good job explaining them. I thought the explanation of Einstein's general theory of relativity was well done. The explanation of time differential when matter nears the speed of light was explained quite clearly. It truly is relative from your vantage point. Also the concept of space being curved was well presented. This is really a very interesting book. I truly couldn't put it down when I found it in the library. It really stimulates your thought processes and gives you new perspectives on the world we live in. I really like this book.

Fate of Space and Time: Blackholes to Big Crunch

Published by Thriftbooks.com User , 17 years ago
This is one of the early books written for those who prefer words to equations to understand cosmology of blackholes. The author attempts to answer basic questions such as; was there a beginning of time? Is there an end to the universe? What are similarities of blackholes, singularity, and Big Crunch? Is the universe infinite? Or does it have boundaries? What are the effects of the critical value of the universe's density on its rate of expansion? What is the role of God in the creation of the universe and how it can be evaluated by the anthropic principle? Did God creat laws of quantum mechanics and theory of relativity and let it evolve itself without leaving an option for him to intervene? How did he choose an initial state or configuration of the universe? What were the boundary conditions at the beginning of time? The author reviews the literature that includes Newton's laws of gravitational force, Einstein's theory of relativity, and quantum mechanics. Problems arise when one combines these theories to understand the four natural forces; the electromagnetic force; the strong and weak nuclear forces; and the gravitational force by one unified field theory (Quantum theory of gravity, and Superstring Theory). This theory must unify the forces of the cosmos and forces of microcosm so that it can explain the grand plan of God in the creation of heaven and earth. The author describes quite a few interesting anecdotes in academic research: The first experimental evidence in support of Einstein's theory of relativity contained errors that were as great as the effect they were trying to measure. In 1920s it was supposed that there were only three men who understood theory of relativity and now thousands of graduate students and many millions are familiar with this theory: Many readers should be encouraged at this. When the author presented his theory that black hole radiates like a hot body, many repudiated his assertion and later accepted it. Max Born, a Nobel Laureate in 1928 told a group that physics research will end in six months, when Dirac published equations for an electron, in the anticipation that the whole of physics problems are solved. This should remind all of us how far the science and mankind has progressed despite this prediction. Newton, one of the greatest scientists of this planet also had a streak of meanness in him. Einstein's honesty as a scientist could be found when he admitted that his universal constant to account for a static universe is a mistake, but he was also less willing to accept quantum mechanics; this is known by his well known comment that "God does not play dice." Hawking having a bet with Kip Thorne over the existence of black holes in Cygnus X-1 for Penthouse magazine to Private Eye magazine shows the fun side of academic rivalry. This is one of the very few books I have read that discusses God's role at the level of quantum mechanics. The reader should feel lucky to have such a book for his/her personal libr

Published by Thriftbooks.com User , 21 years ago
Most people know that Hawking is a brilliant physicist, but after reading this book, one develops a respect for his other talents as well. Most noticeable is Stephen Hawking's ability to make very complicated ideas seem quite clear through good explanations, clear comparisons to real life events, and a soft humor. The organization of chapers mostly follows a chronological order, which gives a sense of history from Aristotle to present day, yet also establishes concepts in an order that builds on itself. One also realizes that A Brief History of Time was written by a writer, not a scientist who happened to put ideas to paper. This makes a big difference in the enjoyment of a book, since good information in a dry, dull form can be difficult to read (remember trying to keep your eyes open while reading a dull textbook in a subject of interest?). On the other hand, interesting information presented in an interesting manner make A Brief History of Time as much of a 'page-turner' as physics can be. In summary, a fountain of information from galaxies and black holes to quantum mechanics presented in such a way that is not only as easy to understand as it can be, but is an enjoyable experience to read.
Copyright © 2020 Thriftbooks.com Terms of Use | Privacy Policy | Do Not Sell My Personal Information | Accessibility Statement
ThriftBooks® and the ThriftBooks® logo are registered trademarks of Thrift Books Global, LLC