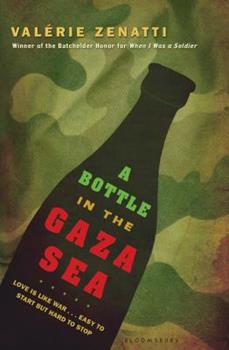 A Bottle in the Gaza Sea

A seventeen-year-old from Jerusalem, Tal Levine comes from a family that always believed peace would come to the Middle East. She cried tears of joy when President Clinton and Yitzhak Rabin shook hands with Yasser Arafat in 1993-a moment of hope that would stay with her forever. But when a terrorist explosion kills a young woman at a caf in Jerusalem, something changes for Tal. One day she writes a letter, puts it in a bottle, and sends it to Gaza-to...

Published by Thriftbooks.com User , 13 years ago
This story about the relationship between an Israeli girl, Tal, and a Palestinian boy, Naim, via e-mail and instant messaging, is honest but hopeful. Well-written and compelling, the tale of their relationship conveys the confusion, anger, exhaustion, and depression felt by many young people during the 2003 intifada. Tal sees what's hiding behind Naim's cynicism and sarcasm, and she and her family are definitely on the liberal side of the political spectrum, but she won't put up with his victim mentality and asks him, "...where exactly are your advocates for peace? Why are there never a hundred thousand Palestinians gathered together calling for peace with us, without hatred in their eyes? Why did the intifada break out ... when we ... were prepared to give you a state? How can you accept the fact that terrorists kill women, children, babies?" Naim protests collective punishment by the Israelis, among other perceived oppressions, but he also criticizes the Palestinians and especially resents the Islamic fundamentalists. He yearns for freedom and eventually finds a way to study in Canada. Bottle in the Gaza Sea is more nuanced, and is particularly strong in portraying a non-stereotyped Gaza, including Internet, restaurants, etc.- REVIEWED BY SUSAN BERSON - DENVER, COLORADO

Published by Thriftbooks.com User , 13 years ago
I really like books written in letters (Sorcery and Cecilia, The Year of Secret Assignments, Ella Minnow Pea, etc.); epistolary novels are one of my favorite sub-genres. This one, A Bottle in the Gaza Sea, centers on the continuous conflict between Israel and Palestine. A girl from one side writes a letter, puts it in a bottle, and throws it into the Gaza Sea after witnessing a bombing in her neighborhood. A boy from the other side ends up reading it and replying. The rest of the book is the correspondence between the two of them, with occasional journal entries by each. What a gorgeous little book. The writing was wonderful. The emotional tension and conflicts that the author balanced between the two characters was really powerful. For me, a middle class American girl, it was an eye-opening insight into an entirely different world, one that is very much alive right now, at this same time in history. I urge you all to read it, too.

Published by Thriftbooks.com User , 13 years ago
After a nearby bombing that leaves Tal Levine, a girl desperate for peace in her Israel home, shellshocked and numb, Tal is desperate to reach out to a Palestinian, hoping for proof that they are not all heartless killers. So she writes a message in a bottle and tosses it into the Gaza Sea. When Naim finds the bottle and its message, he becomes angry. He emails Tal, and slowly the two form an understanding of each other's lives. But when tragedy strikes again, will their relationship survive? A BOTTLE IN THE GAZA SEA is an intense, powerful, and eye-opening experience. Zenati doesn't seem to hold back in her descriptions of the turbulence-ridden Middle East and how deep the animosity runs. But hers is also a novel of hope and understanding as two teenagers, the next generation, come together to forge an unforgettable bond. This is a galvanizing read that will definitely make you think. Reviewed by: The Compulsive Reader

Published by Thriftbooks.com User , 13 years ago
This is a great YA book that presents two narrators with different perspectives. In this day of emails and IM text, it's not surprising that a teen girl and a young man can link up electronically. Readers get a vivid understanding of what it would be like to live in a country occupied by another political entity. Readers will understand the frustrations of growing up under conditions of war and terror. The two perspectives allow readers to understand both sides of the Israel/Palestine issues. The need for psych counseling of folks growing up in war zones was a unique addition to a YA book. Would be good to read with teens in violent inner cities to get an understanding of what happens with countries/poliltical entities that never come to compromise. Would be excellent book to link with Real Time with multiple narrators. Real Time

Published by Thriftbooks.com User , 14 years ago
This very quick read tells the story of Tal and Naim, two people who should be enemies since one is Palestinian and the other Israeli with the Gaza wall separating their lives and their experiences. One day, after a horrific terrorist attack on a nearby cafe, Tal decides that the only way she can deal with the pain is to reach out to someone on the other side. She needs to know that they are not all heartless. As such, Tal puts a message in a champagne bottle and enlists her brother (who is in the Israeli guard) to drop the bottle somewhere on the other side of the wall, preferably in the Gaza Sea. What ensues as a result of this action is the crux of this very short and enjoyable read. Naim, who first identifies himself only as Gazaman, is the recipient of this letter. He is able to read Hebrew and emails back to Tal. Over the course of a few months, Tal and Naim get to know each other and what life is like on the other side. Eventually they even manage an IM conversation. Then, when Tal is out filming scenes of every day life, she happens to be in the wrong place at the wrong time, filming a bus as it comes to a stop and then explodes. Another terrorist attack but this time, Tal is an eyewitness. Can the friendship she has formed with this stranger help her through the trauma? Will she be able to find a way to be whole once more? All of these questions are answered, leaving the reader hoping that the lives of Tal and Naim will meet again in a better place and time, as hinted at by the end of the story. I definitely recommend this book to young adults or adults alike who hope for peace just as much as the young protagonist. It's also a great way to learn some history in a easy format. The message of hope is uplifting.
Trustpilot
Copyright © 2022 Thriftbooks.com Terms of Use | Privacy Policy | Do Not Sell My Personal Information | Accessibility Statement
ThriftBooks® and the ThriftBooks® logo are registered trademarks of Thrift Books Global, LLC