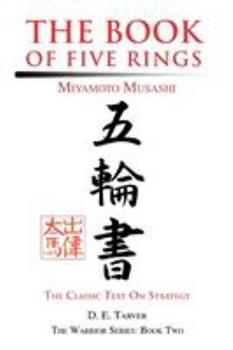 For centuries, "The Book of Five Rings" has been a resource for gaining insight into the mind of the warrior spirit. The famous Samurai, Miyamoto Musashi, originally wrote the work in 1645. Musashi, the Sword Saint, as he is known in Japan, killed his first man in a duel when he was only thirteen. He went on to fight in over sixty duels and never once lost.In "The Book of Five Rings," Musashi recorded his secrets to success which are applicable to...

Published by LNorton , 1 year ago
Buying from a martial artist's standpoint, this is a great book. It has some really helpful tips, and I would recommend it to any martial artist from the beginner to the highest degree of black belt. There are always new things we can learn, and this book is great for that.

Get a nice version of this book

Published by Auggie , 1 year ago
The book was amazing but the version I got was in the format of a kids book. Kind of funny read how to slay your enemies in comic sans font.

Published by Goody , 2 years ago
Came in great condition I got the hardback and it came with the sleeves. Only thing keeping it from 5 stars is that there are no illustrations in the book, but the literature is great and it has a good large letter size.

Book is amazing, quality of the handling-not so much

Published by Hao-Wen , 2 years ago
This book is amazing. Smaller than expected. I bought this book in the “like new” condition, however, it came with the spine bent in many places. Definitely didn’t look anything close to new. Book is still readable just annoyed with the order overall

Published by Thriftbooks.com User , 14 years ago
If anyone is in to Legend of the Five Rings RPG this book is way cool.

Bonus Material Not Found in Other Translations

Published by Thriftbooks.com User , 18 years ago
This classic text deals with the delicate art of leadership, and was composed originally in 1643 by the famous samurai Miyamoto Musashi. But this book isn't just for those involved in the martial arts, as the previous reviewer suggests, no far from it; it's for anyone who wants to enjoy the neverending wisdom contained within this text. Thomas Cleary's translation of Miyamoto's masterpiece is comprehensible, with an introduction that presents us readers with the spiritual backdrop of the warrior tradition that is vital for the rest that proceeds. This most up-to-date edition also embraces one more important Japanese text - "The Book of Family Traditions on the Art of War" by Yagyu Munenori; here the book highlights insights of Zen and Taoism as they pertain to the way and life of the warrior. Enjoy the book! Cleary is a terrific translator.

Some comments on the philosophy

Published by Thriftbooks.com User , 19 years ago
As others have already written very complete reviews, I just had a few miscellaneous comments, mostly on how to understand Musashi's seemingly paradoxical ideas about technique.This has become a legendary book. Written by the famous swordsman, sometimes referred to in the west as "The Lone Ranger of Japan," Musashi claimed to have been in over 60 sword battles, triumphing each time, so it's no wonder Musashi's name has become legendary in both Japan and the west.The book sets out Musashi's philosophy and correct Way of the Sword. But the principles Musashi espouses are bound to sound perplexing to many people. Musashi says that the best stance is no stance, that too much strength is bad (your sword may shatter when clashing swords), and that even too much speed is bad (it may upset your balance), and that none of these are the true Way of the Sword. The best technique is, in fact, no technique.This sort of philosophy is bound to be more than a little confusing, so I'll see if I can clarify it a little. I'm not sure I understand Musashi either, although I've studied martial arts for many years and have read my share of eastern philosophy, but I'll give you my ideas on how I relate to them just in case you find them useful.Basically what Musashi is saying is that once you've learned a technique and committed it to memory and especially "muscle memory," it becomes fixed and is no longer adaptive. Your body becomes channalized into this form or technique, which then becomes limiting, preventing you from achieving true mastery, which is the ability to adapt and flow with any of the infinite number of situations you may encounter. Fixity is therefore dysfunctional and is not the true Way of the Sword. This might be what Musashi means when he speaks of the Way of Emptiness being his way and the true Way of the Sword. In other words, his technique is no technique because it is empty of all fixed, unchangeable, and unadaptive aspects.There is an analogous principle in Zen. In Zen, the highest level of technique is called "the technique that can't be seen." This doesn't mean that the technique is so fast it's invisible. It's that the technique is so advanced and subtle that its principles aren't obvious and easily seen. Musashi's ideas seem to reflect this Zen Buddhist principle also.Interestingly enough, this idea has some support from western research into learning and the brain. In learning theory, there is the idea of "stereotyping," (which has nothing to do with social or racial stereotypes), where motor movements that have been learned become fixed into a certain sequence or pattern, but which is not necessarily the most efficient or effective. My learning theory instructor used the example of shaving strokes. He realized after some years that he always did his shaving strokes in the same way, after having learned how to do them, but that they weren't necessarily the best way to shave, anymore. Now that he'd been shaving for years, he "re-engineered"

Places Musashi in an Historical Context

Published by Thriftbooks.com User , 19 years ago
What I prefer about Victor Harris's translation of Musashi Miyamoto's book is the fact that Harris has gone through exacting lengths not just to present an accurate translation in the context of a 17th-century samurai, but to present Musashi in his proper historical context. As opposed to every other English translation I have read, this one includes a chapter which gives a biography of Musashi, and shows many of his creations, such as paintings (including a self-portrait), tsuba (swordguards), etc. We can see where Musashi stayed, and what his grave looks like, etc. For clarity in understanding, this volume, along with the translation by Thomas Cleary, are the best. I should justify that by explaining that I practice martial arts--for those of you looking for a business oriented edition, there are several translations and interpretations out there which are geared towards your needs. For those of you involved in the practice of martial arts, sports, or with an interest in historical strategy texts, I heartily recommend this translation! Whay does this book discuss? Musashi's masterpiece eschews practice, and decries vanity, ego, and "secrets". Musashi was a practitioner of Zen Buddhism, and the influence of Zen philosophy can be seen everywhere in his writing. This is however, definately a book on the strategy of swordsmanship, and not a treatis on religion. Musashi Miyamoto fought in a number of duels--back in the era of true challenge matches--when usually the victor was the man left living! The realities of his times, the fact that life was so cheap and had to be guarded fiercly, and that Musashi succeeded in doing this is what makes his writing even more precious. This was the book Musashi passed on to the students of his school, the unusual two-bladed Ni-to Ryu (two-sword school). For more on the historical Musashi Miyamoto, read Makoto Sugawara's excellent (non-fiction) "Lives of Master Swordsmen".
Trustpilot
Copyright © 2022 Thriftbooks.com Terms of Use | Privacy Policy | Do Not Sell or Share My Personal Information | Accessibility Statement
ThriftBooks® and the ThriftBooks® logo are registered trademarks of Thrift Books Global, LLC