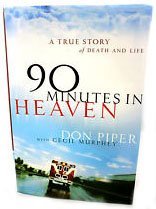 In the ten years since 90 Minutes in Heaven was published, millions of people worldwide have read the incredible true story of Don Piper's experience with death and life--and in reading they have... This description may be from another edition of this product.

Published by Winnie Jacks , 1 year ago
I purchased this book because I was replacing one that was lost when my house flooded in Imelda. It was signed by Don Piper when he spoke at my daughter's church in.League City, Texas. I know it is not the same book, but I really want to keep a copy. It inspires me. He survived a horrendous automobile accident to face a difficult recovery.

Published by Susan , 1 year ago
Wanted to purchase the book itself, but what was sent is a smaller book that says it is selections from the bestseller 90 Minutes in Heaven. No where does it state that so beware of the discrepancy and look closely at the top of the cover!

Great, great mind and soul expanding book. Take the time to read it!

Published by Thriftbooks.com User , 3 years ago
.
Published by Thriftbooks.com User , 6 years ago
There are problems with this book. I was predisposed in favor of it before I purchased it and I am very much interested in such personal accounts of "out of body" experiences. But here are the problems. This was written by a Christian minister who is hardly a disinterested person in terms of what exactly is his view of the AfterLife. It is probably a question he has given a much greater amount of time considering and contemplating about it here on earth than do those unattached to the church. But what bothered me the most is that upon his ascent to Heaven, he only met people who were also not only Christians but who had helped him in his life towards becoming a minister. Again a very tiny and unfortunately an ideological slice of Heaven. What didn't he meet strangers or non Christians or even non Americans? Heaven seemed to represent only his own experiences on earth and not a magnificent Universe unto itself that would be far greater than his story. A very narrow understanding of Heaven in my opinion and leads me to think that perhaps he wasn't experiencing an "out of body" experience greater than himself but rather a vey "in body personal interpretation" of Heaven.

Published by Thriftbooks.com User , 15 years ago
I don't know what to say, other than - this story has the ring of authenticity. I haven't checked out his facts - and frankly, I picked up his book with a good bit of healthy skepticism. So many people have attempted to make a quick buck off of the spiritual gullibility of others. But based on my understanding of Scripture and my own internal "truth meter," I walked away from this book thinking to myself, "This man may have actually been given a glimpse of heaven." I can see this book providing genuine comfort to those who have lost Christian loved ones...and unspeakable encouragment to those who are themselves facing death.

90 Minutes In Heaven Is Heavenly!

Published by Thriftbooks.com User , 18 years ago
Don Piper died on January 18, 1989 while on his way home from a church conference. Although he does go in depth into his visit "home" to Heaven, his book really concentrates on his life after the accident. After experiencing a joyous reunion with deceased relatives he was wisked away to earth with no explanation. Don is a devout Christian and suffers greatly from his banishment in heaven and with the physical pain and recovery from his automobile accident. This is really a story of survival against all odds and it is extremely motivating. When we hear of such advertisity striking others we often wonder how they find the grit to survive and even thrive. By reading Don's story we find that survival is based on a mixture of hope, faith and sheer determination. Read this book, you won't be disappointed.
Trustpilot
Copyright © 2022 Thriftbooks.com Terms of Use | Privacy Policy | Do Not Sell or Share My Personal Information | Accessibility Statement
ThriftBooks® and the ThriftBooks® logo are registered trademarks of Thrift Books Global, LLC