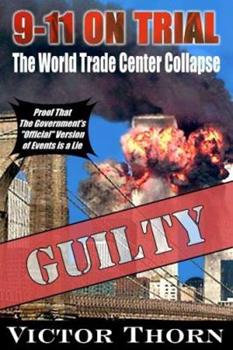 Proves that the government's official version of events regarding the collapse of the World Trade Center towers is a complete and total fabrication. This title uses physics, scientific equations, mathematical formulas, the laws of nature, physical evidence, and expert testimony.

Published by Thriftbooks.com User , 14 years ago
Victor Thorn's book "9-11 on Trial" flattens the pancake theory of the World Trade Center tragedies that has become the current equivalent of the magic bullet theory regarding the assassination of President Kennedy, vulnerable but being promoted by powerful political forces because some kind of answer was needed. Thorn uses the approach of a tough prosecutor in a courtroom in crafting this work that offers a different speeding bullet every chapter. The prosecution theories are developed in a question and answer format based on information culled from 48 listed sources. The pancake theory has been presented by believers in the conventional government theory that was further buttressed by the Official 9/11 Commission Report, which critics denounced for its failure to interview critics of the government's view and accompanying failure to look beyond superficial alleged supportive evidence. A theory was needed to embrace a rapid-fire collapse of skyscrapers resulting from crashing airplanes and resultant fires in the impacted buildings. The pancake theory loomed as a chain reaction choice explaining how the buildings collapsed. Thorn flattens the pancake theory by pointing out some convincing facts about the construction and composition of the World Trade Center buildings. For one thing, there did not appear to be significant fire damage to bring the buildings down. It is pointed out that a Madrid skyscraper had endured after days of burning without collapsing. So did buildings in Los Angeles and Philadelphia following hours of fire damage. Firemen on the scene at the WTC were quoted as stating that the fires were not of particularly significant strength while one telltale photo was taken of a woman waving out the window from one of the buildings amid fire activity. Another significant argument refuting the pancake theory resides in the potent composition of buildings constructed to endure in the wake of the sternest tests from nature and other elements. The strongly reinforced concrete and sturdy layers of steel made the buildings invulnerable to destruction in the manner described. Another point intelligently raised is that the telltale damage at ground level is consistent with explosive detonation rather than fire. Respected Protestant clergyman Reverend Robert Schuller commented in an interview after visiting Ground Zero that he observed tremendous amounts of dust on the ground. This is consistent with decimation by explosion rather than piles of charred rubble, which would have resulted had fire been the cause of the buildings' collapse. Numerous comments from on the scene witnesses ranging from first responders to occupants of the destroyed buildings who escaped to safety, as well as nearby bystanders, described explosions. Loud sounds were repeatedly heard prior to the collapse of the buildings. Fox News could hardly be considered a critic of the Bush Administration's 9/11 position. A Fox 5 News commentator on the scene

Shows Tip of the Iceberg of Public Corruption

Published by Thriftbooks.com User , 15 years ago
The trial style of this book can seem dry, at first. Every chapter represents different type of testimony/evidence. It has a thorough bibliography. After reading every chapter of this book one overwhelmingly understands that the mass murder of 3000 people at the World Trade Center was an inside job that was covered up by our own government. There was never any governmental crime scene investigation. Indeed the evidence seemed to disappear about as fast as the buildings came down. The recent newfound evidence of thermate by BYU Professor Jones and the realization by scholars all over the country that the odds against the veracity of the official version of events is about a trillion to one makes me strongly feel that this book serves a very important function as an introductory primer as to the extent that the corrupt influences in this country (actually a worldwide power) will go to attain their evil goals. This book demonstrates why and how the major media dish put propaganda on behalf of these influences and that it behooves all Americans to develop their own independent sources of news information so one can increase their wisdom and knowledge.

Thorn sticks to the laws of Physics

Published by Thriftbooks.com User , 16 years ago
The beauty of this book, is that while other books present theories and conspiracies etc, Thorn truly presents what happened and what didn't happen on that dreadfilled day. Using the accuracy of physics, in a courtroom trial setting, he pulls apart the science of fire, jet fuel, and steel. Leaving no stone unturned, he proves beyond a reasonable doubt, that the towers fell due to a controlled demolition. And so leaves the reader with a profound sense of urgency to spread this truth to others. Fascinating, disturbing, and urgently motivating to awaken even the saddest of lethargic citizens to act. I highly recommend this book and this TRUTH be read and shared. The clock is ticking.

Clear and to the Point

Published by Thriftbooks.com User , 16 years ago
This is a short book, concise and to the point, written in the form of a trial hearing, calling on the opinions of expert witnesses. Unraveling the real story of the events of 9/11 has been complex and confusing. There is total disagreement between the official and alternative conspiracy theories, and debates on subjects like what hit the Pentagon rage even among 9/11 Truth activists. So 9/11 on Trial is an excellent introduction to the subject because it is clarity itself. In court, witnesses must respond directly to questions, without straying, and judges keep the line of questioning focused on reaching a verdict. In 9/11 on Trial, the focus is forensic, never digressing from the smoking gun: were WTC towers 1, 2 and 7 actually demolished with explosives? Thorn's witness statements, composed of arguments from 48 sources, hammer home this conclusion beyond any reasonable doubt, using clear and understandable logic, physics and mathematics. For example, one chapter takes the fact that the Twin Towers collapsed straight downwards only 2 seconds slower than free-fall speed, and gives mathematical and engineering proofs why this was only possible in a controlled demolition. 9/11 on Trial will be useful both for the uninitiated and for veteran truth activists looking for clear "proof the government's official version of the 9/11 events is a lie." Here is what respected author David Ray Griffin wrote about it: "In 9/11 on Trial, Victor Thorn has organized an enormous amount of important information, most of which was previously difficult to find, into a very readable book - one that proves beyond a reasonable doubt that the official story about the collapse of the WTC is a lie. I wish I had had it when I was writing my books on the subject... Congratulations on a great piece of work. You will clearly have the most readable book out there and you have made a lot of information available that over 99 % of the people would not otherwise be able to find."
Copyright © 2020 Thriftbooks.com Terms of Use | Privacy Policy | Do Not Sell My Personal Information | Accessibility Statement
ThriftBooks® and the ThriftBooks® logo are registered trademarks of Thrift Books Global, LLC