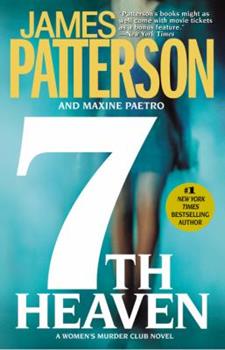 by James Patterson and Maxine Paetro

Discover the Women's Murder Club's most terrifying case ever in this New York Times bestseller. As a terrible series of fires blazes through California, the heat begins to rage too close to home. A terrible fire in a wealthy suburban home leaves a married couple dead and Detective Lindsay Boxer and her partner Rich Conklin searching for clues. And after California's golden boy Michael Campion has been missing for a month, there finally seems to be...

Published by Janine , 3 months ago
I only purchase hardcover books which this was presented in the description as being. Once received this is not a hardcover but an oversized paperback.

Published by Thriftbooks.com User , 12 years ago
If you like james patterson this book is great. I love the womens murder club book.

Published by Thriftbooks.com User , 12 years ago
I loved all the Patterson books from this series. And this is no exception. I don't want to give ANYTHING away. Just get it. You'll love the ending.

Published by Thriftbooks.com User , 13 years ago
What an excellent series! I was not a James Patterson reader until after I started watching the Women's Murder Club on ABC. Then I went out and bought all of the books in the series! Each one can stand on it's own but you really need to read them in order for the goings-on of the central characters. Too bad the bozos at ABC cancelled the show before giving it a solid chance. The show may be gone, but the books are still here and so worth reading!! Thank you Mr. Patterson. I'm already looking forward to the 8th one.

Published by Thriftbooks.com User , 13 years ago
Fires are being set to homes of the wealthy, leaving the residents dead. Detective Lindsay Boxer and her partner, Rich Conklin, are trying to find the murdering arsonists when they get a tip on another prominent case. The case involving the disappearance of Michael Campion, the son of a former governor, has been at a standstill but an anonymous tipster provides a new lead. Soon, Boxer and Conklin have a confession, but will it stand up in court? Women's Murder Club member and Assistant District Attorney, Yuki Castellano, will have the case of her life as the trial starts. Meanwhile, will Boxer and Conklin find the deadly arsonists? The members of the Women's Murder Club are at it yet again in 7TH HEAVEN. Each book is written to stand alone although the friendship of these women has grown throughout the series. There are hints about past incidents that fans of the series will appreciate. It should be noted that newcomers to the series will miss the character development that has built slowly throughout the series, as some of the members of the Women's Murder Club only make brief appearances in 7TH HEAVEN. Patterson and Paetro delve a bit further into Lindsay Boxer's psyche, this time examining her relationship to Joe versus her commitment to work. Yuki's insecurities are also examined as she is up against a female attorney not known for losing. Will these two members grow stronger as they face adversity? James Patterson and Maxine Paetro deliver another fantastic thriller with 7th HEAVEN. The fast pace will have readers rapidly turning pages to see just how things will unfold. 7TH HEAVEN is yet another hit from these two talented authors and is easily recommended. COURTESY OF CK2S KWIPS AND KRITIQUES

After horrendous YOU'VE BEEN WARNED, Patterson returns with what might be best in the series!

Published by Thriftbooks.com User , 13 years ago
Lindsay, Yuki, Claire and Cindy are back for the seventh adventure of the Women's Murder Club in James Patterson's 7th Heaven. We all know that Patterson gets his name plastered on an insane amout of books, and since he is behind so many of them, some of them are bound to be good. And guess, what, 7th Heaven is a really good book, perhaps the best in the series. The book opens with a couple (we learn they are rich and upper class) being held captive by Pidge and Hawk. The couple are pleading for their lives as Pidge and Hawk promise them they will live, and that this is only a robbery. Pidge and Hawk steal valuables from the couple, then set the house on fire with the couple still tied up inside. That is case #1. The second case is Michael Campion. He's an 18 year-old boy with heart defect that also happens to be the son of the former governor of California, Connor Campion. Lindsay Boxer and her parter Rich Conklin receive a tip that young Michael was last seen entering the house of a prostitute named Junie Young. Junie is hauled down to the police station where she denies knowing Campion before finally admitting that he died of a heart attach while with her and that all she did was dispose of the body. Governor Campion insists that this girl be tried for 2nd degree murder, and Yuki gets assigned the case. The book then proceeds to follow the case as Junie is put on trial and the exploits of the serial arsonists as killers Pidge and Hawk continue to strike. The last two novels in the series have started the disappointing trend of having several cases going on that aren't necessarily related. So it's like 3 mini-novels inside one big one. The Cross books aren't like this, and I feared 7th Heaven would suffer just like 6th Target did. You dillute the strength of the novel by having several murder cases at once. But 7th Heaven has a lot going for it. First, something isn't quite right with the Campion case. There is no evidence except for a recanted confession, yet Yuki insists on prosecuting anyway. As for the arsonists, Pidge and Hawk are truly brutal killers. Lindsay lies awake at night as fears of the case overwhelm her, and she begins to even suspect her own arson investigator, James Hanni. Also, Lindsay's relationship with Joe while also being attracted to her partner, Rich, was someone interesting. And to top it all off, both cases manage to intersect as some point and both cases have high quality endings. Fans and skeptics of Patterson will enjoy this novel. After one of the worst novels of any genre and by any author in YOU'VE BEEN WARNED, Patterson again returns to what has made him so popular. Readers should remember that just because one Patterson novel is really good, there is no guarantee that the next will be worth the pages it is printed on.
Copyright © 2020 Thriftbooks.com Terms of Use | Privacy Policy | Do Not Sell My Personal Information | Accessibility Statement
ThriftBooks® and the ThriftBooks® logo are registered trademarks of Thrift Books Global, LLC