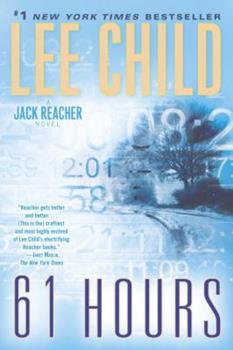 #1 NEW YORK TIMES BESTSELLER - THE BLOCKBUSTER JACK REACHER SERIES THAT INSPIRED TWO MAJOR MOTION PICTURES AND THE UPCOMING STREAMING SERIES REACHER "Reacher gets better and better. . . . [This is the] craftiest and most highly evolved of Lee Child's electrifying Reacher books."--Janet Maslin, The New York Times A bus crashes in a savage snowstorm and lands Jack Reacher in the middle of a deadly confrontation. In nearby Bolton, South Dakota, one brave...

Published by Paula , 2 months ago
Love this book. Not quite done yet (don't tell me the ending). I love all the Jack Reacher series. What happened to Jack?

Published by Charles , 2 years ago
Jack Reacher an interesting character.

Published by Thriftbooks.com user , 3 years ago
Another excellent story line by Lee Child. I highly recommend it.

Caffeine was invented for the day after books like this!

Published by Thriftbooks.com User , 12 years ago
If "open" user reviews are useful in deciding whether to choose a book or not (and as an avid reader I take choosing books very seriously, it's one of my great pleasures in life), if you are familiar with this series it's an easy choice. This is one of my very favorite (top five) series across all genres, and having wistfully looked at the picture of the cover for months, I'm happy to say the wait was worth it. For me, recently Lee Child has tightened his already clean, sparing prose down with the recent "Gone Tomorrow" and seems to be following in the same vein here. Also, as in "Gone Tomorrow" this is a less insouciant, in-your-face, mature Reacher, who while formidable does makes mistakes, and at one point in the story demonstrates a real anguish that I've seldom seen in this series. Since others have laid out the plot I won't go through it again, just add that I am not quite sure how Child or any good writer does it, but this is one of those stories where events, some larger, some smaller, begin to mass and vortex together, and steadily the tension ratchets up and up, and in this book it's relentless, had to keep turning the pages until 3 in the morning. The actual language used is basic enough, and Child is a genius at saying just enough. Another element as mentioned by others is the omnipresent, deadly, burning cold of an indifferent South Dakota winter - the way this is written you can FEEL a steering wheel jerking from you under the ice ruts, and the sting of icy snow. As usual the relationship Reacher forms with a woman on a telephone is an intelligent one, Child's depiction of the women Reacher encounters are much appreciated vs. those of the author Brian Haig (where the brilliant beautiful female in question always seems to end up being a psycho!) In its way this book is brutal and pulls no punches on your emotions, at least there were a couple of places where I was thinking "oh no......" So, if you are new to this series, it's just a damn good read, and you are doing yourself a disservice if you don't backtrack and pick up the earlier novels. If you are a Reacher fan this is a worthy, gripping, edition to the series. The one grief I would have, and maybe it's kind of a need for the perfect hero, is while Reacher certainly remains heroic, and a realistic one in the this book and the last, I miss the supremely self-confident, quick-tongued Reacher of earlier novels (like when he threatened to turn over an oily slacker and use his face like a mop). Perhaps he is a bit godlike in earlier novels and this seems to be akin to the earlier Clint Eastwood westerns which eventually evolved to a more complex, vulnerable character depicted in the Outlaw Josey Wales. But I miss the avenging angel Reacher of "Bad Luck and Trouble", "The Hard Way" and "Persuader". He's more human here, and it's more "realistic" in that way, but I miss the guy who head-butt a smarmy deputy off a bar stool in "Echo Burning" a.k.a. all is right with the

Published by Thriftbooks.com User , 12 years ago
Another lovely Reacher novel. I'm so hooked on Jack Reacher. If you're looking for a totally objective review you may not find it here. If you like cozy English mysteries you might not like Lee Child's books. But if you like smart tough mavericks you came to the right series. This one was in 3rd person if that matters to you. Some was told from the bad guys' POV but most from Reacher's. Bits and pieces of Reacher's background were revealed, nothing astounding because all us Reacher fans just nod our heads and murmur "of course." The story was believable but not too ordinary either. This is Reacher after all and he does fall into odd situations. That's why we love him. This wasn't as violent as some but it was far from non violent. Fisticuffs were involved. Heads were cracked, bad guys came to bad ends. The next book cannot come too soon.

a cliffhanger? not really...

Published by Thriftbooks.com User , 12 years ago
This past Saturday Janet Maslin reviewed "61 Hours" in the New York Times. She admires Lee Child and his creation, Jack Reacher. Maslin called this new book a "cliffhanger." And it could be. Perhaps. Reacher is dealing with a number of insidious forces in a small South Dakota town. There's a huge private prison nearby. There's a motorcycle gang peddling tons of meth on the outskirts of town, In Mexico, a drug kingpin is plotting the death of a witness. Then there's Reacher, who always ends up in the wrong place at the right time. Oh, and there's one more powerful force which shapes this story; the weather. It is brutal, cold, windy, snowy, icy, deathly, almost impossible to survive. Will Reacher survive? Some readers might wonder. Child leaves some readers hanging at the end. Or not. He leaves us all the clues we need to figure it out. Cliffhanger or not, Child's fans will be be buzzing all summer about this one. And luckily for us, Child's next book won't be another year away. It will be out in the fall. "61 Hours" is a gripping, scalding, freezing, boiling, choking, struggling, and ultimately, a thoroughly smashing read. We can't forget that Child is actually a Brit. That's easy to do. He knows America and Americans very well.

Published by Thriftbooks.com User , 12 years ago
Lee Child is a very good writer, and his protagonist Jack Reacher is a classic action hero. "61 Hours" should please all Child's fans and win some new ones, because it is just as gripping as any of its predecessors. I happened to read it in two sessions, simply because I had to do some work in between; but if I had been able to, I would have gone through all 388 pages without putting it down. There just never comes a point where you think, "OK, everything is calm for the time being; I can leave it there till tomorrow". As always, the background research is meticulous and accurate, and entirely US-centric; how many other British writers, for instance, would think of describing a house as being shaped like a pound cake? As a professional editor, I can't see anything in Child's writing that I would think of changing. No problems with grammar, punctuation, style, pace; not the slightest infelicity anywhere; and the dialogue is utterly convincing. It all makes for a smooth, easy read and lets you rip along at your fastest reading pace. As always with Child, you'll be disappointed at how soon you reach the end. I must admit to being surprised at how compulsive I found "61 Hours", because its construction is noticeably simpler than many of the Reacher novels. The first, "Killing Floor", had a very complex plot with a lot of characters (many of whom ended up dead in various horrible ways) and a lot of double-crossing and surprise twists. The same could be said of most of the intervening 12 Reacher books. In contrast, "61 Hours" tells a single story that builds gradually to an exciting climax; but you never feel short-changed. Instead of presenting us with a continual series of surprises, the author focuses on describing the chilling cold of a winter storm in South Dakota, and filling in a more detailed picture of a limited set of characters. The one plot twist that seems designed to fake you out (and, rather unconvincingly, fools Reacher himself) is so obvious as to seem almost perfunctory. On the other hand, so complete is Child's mastery of the genre that he can keep the reader on tenterhooks for page after page, even when nothing much seems to be happening. The experience of war has been described as "long periods of boredom punctuated by moments of sheer terror" - and that is what Child expertly brings home to you. Although his villains are just as frightful as ever, it would perhaps be fair to say that the real adversary Reacher faces in "61 Hours" is the weather. "The cold hit him like a fist. It was raging. It was searching. It stunned him. Way below zero. Too far below to even guess at a number". I can't recall a novel in which the cold plays such a dominant role since Alistair MacLean's "HMS Ulysses". By the time you reach page 100, you're uneasily aware that being caught outdoors in that sort of cold for an hour or two would be just as fatal as being shot in the heart. As for the denouement, let's just say that although Reacher apparently mu
Trustpilot
Copyright © 2022 Thriftbooks.com Terms of Use | Privacy Policy | Do Not Sell or Share My Personal Information | Accessibility Statement
ThriftBooks® and the ThriftBooks® logo are registered trademarks of Thrift Books Global, LLC