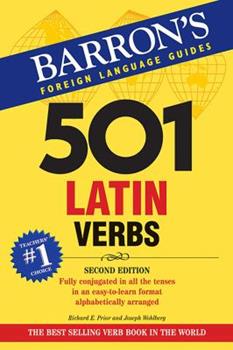 by Joseph Wohlberg and Richard E. Prior

Learning Latin is easy with Barron's 501 Latin Verbs . The authors provide clear, easy-to-use review of the most important and commonly used verbs from the Latin language. Each verb is listed alphabetically in easy-to-follow chart form--one verb per page with its English translation. This comprehensive verb guide is ideal for Latin students or anyone interested in learning Latin. It includes: 501 of the most common Latin verbs, conjugated in all tenses...

Published by Thriftbooks.com User , 16 years ago
An absolute must-have for anyone learning Latin. In case you don't know it yet, Latin is a language in which most verbs have, no kidding, more than 130 different forms each. There are rules, of course, but the sheer volume of things to memorize can really fracture your brain. This book is my constant companion while I do homework, and I'd be lost without it.

Published by Thriftbooks.com User , 18 years ago
The first year I studied Latin (using an early edition of Wheelock) I used the 201 Latin Verbs text, part of the same educational series as the 501 verbs series from Barrons. This book has more substance than that earlier volume, not merely from the 300 additional verbs, but also from additions to the text's introduction. Richard Prior (not the comedian) took the contributions of Joseph Wohlberg (whose 201 Latin Verbs I also own) and expanded and revised those with his own additions for this text.This is at heart the most basic of basic books. Each of the numbered pages 1-501 has one verb laid out in all its tenses, voices, moods, persons and numbers. The pages are laid out with Active Voice on the left (the most common voice found in Latin writing), and Passive Voice on the right. The page is broken into Mood - these include Indicative (the most direct form of address), Subjunctive, Imperative, and Infinitive. The verb tenses in each of these subsections is laid out in first, second and third person, singular and plural, in a chart. . The bottom of each page lists the participle forms, forms of verbs used as modifiers. There are also alternative forms of the verb, compound and related words, sample sentences showing context - these are not 'fake' sentences, but give the sources (Cicero, Horace, etc.). Each page has one verb dedicated to it.As Prior indicates, the series by Barrons has the limit of 501 verbs (an arbitrary but useful number) - but, in fact, since there are patterns for verbs (called conjugations), knowing one is often knowing them all; the exceptions to these rules for the various conjugations are certainly included, as are the strange verbs (sum, esse, to be, which ends up being strange in every language, and many others like eo, ire, to go). Some verbs are not fully developed - the authors explain that while there are theoretical constructs of verbs, sometimes we have no evidence that such tenses or constructions were ever used, and so these are omitted. Also, there are lots of verbs whose construction parallels each other precisely (many verbs are formed from prefixes being attached, much as languages like German also do); these verbs are parenthetically linked to other, similar verbs. There is an English-Latin index, and a Latin-English index at the end of the book. These indexes are handy, as is the Verb Form locator at the end. The word selection comes from frequency counts of verbs on Latin exams of the New York State Regents and other College Board entrance and/or placement examinations. There are few additions here - little grammar, no pronunciation, nothing by way of history. This is simply what it purports to be - a book of verbs. In that, it is very useful, and as I studied Latin beyond the first year, an invaluable aid.

Published by Thriftbooks.com User , 19 years ago
This is an excellent reference book I use all the time - doing my Latin homework, finding words to "enrich" English essays, or just reading for fun. Looking up verbs in this book is 100% better than doing so in a dictionary - you're lucky if you even find the principal parts in a dictionary.This is a great book to have for any Latin student.

A Thorough Reference Tool for the Learner of Latin

Published by Thriftbooks.com User , 19 years ago
Barron's has always produced some good academic tools (they are best known for their standardized test aids), and this work is no exception. As the title read, there are 501 Latin verbs, fully conjugated in every tense. This, of course makes for a great reference tool for anyone who is studying Latin, or translating Latin, and is having a tough time trying to find (or learn) the correct conjugation of a verb. There is also a nice intro to this volume explaining certain things about Latin verbs, and this same introduction includes charts for English verb conjugations. The book is formatted like a dictionary, in alphabetical order, and each verb is listed with its conjugated form thoroughly described/demonstrated. 501 verbs may be limited but not too many students of Latin (who are perhaps simply trying to finish their languages in school) will use this many verbs, so in that sense 501 is enough. However, for the scholar of Latin, perhaps more might be needed. Nonetheless, the book serves it purpose well with the verbs that were included.There are several appendices in the back which include an Index of English-Latin verbs, verb form locator, and Latin verb index. Each of these give added aid to the student and user of this volume. Overall, this is a great volume, and has been a big help for me in my past studies of the Latin language.

great book. well worth the money

Published by Thriftbooks.com User , 20 years ago
This book was great. It really helped me with my college latin class. One great feature of this book is a section in the back that has strange forms of verbs listed alphabeticaly. When you are reading latin and you come across something you dont recognize, this section can help you figure out which verb the form is from. Buy this book. It is worth it.
Trustpilot
Copyright © 2022 Thriftbooks.com Terms of Use | Privacy Policy | Do Not Sell My Personal Information | Accessibility Statement
ThriftBooks® and the ThriftBooks® logo are registered trademarks of Thrift Books Global, LLC