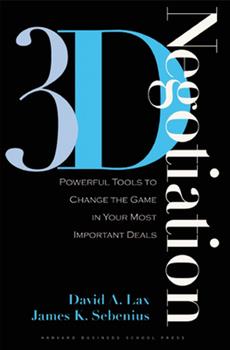 3-D Negotiation: Powerful Tools to Change the Game in Your Most Important Deals

by James K. Sebenius and David A. Lax

When discussing being stuck in a win-win vs. win-lose debate, most negotiation books focus on face-to-face tactics. Yet, table tactics are only the first dimension of David A. Lax and James K. Sebenius' pathbreaking 3-D Negotiation (TM) approach, developed from their decades of doing deals and analyzing great dealmakers. Moves in their second dimension--deal design--systematically unlock economic and noneconomic value by creatively structuring agreements...

3-D Negotiation in a 1-D World

Published by Thriftbooks.com User , 15 years ago
3-D Negotiation: Powerful Tools to Change the Game in Your Most Important Deals by David A. Lax and James K. Sebenius is not the book for Gordon Gekko types, practiced in the simple tactics of win-lose haggling. This book is the The Art of War for deal making. Like Sun Tzu for strategy, 3-D Negotiation is the primer on creating deals with lasting value. Anyone that has ever bought, sold, or traded anything will gain something with even the most cursory read of this work. 3-D Negotiation is a book that will become dog-eared, highlighted, notated, and underlined. This is a reference that you will return to again and again. It is very clearly written in a way that is accessible to everyone. Each point is illustrated with a relevant and detailed real-world (and often personal) example from the authors. The authors are both graduates of Harvard Business School, co-founders of Harvard's Negotiation Roundtable and developed the executive program on strategic negotiation at the Business School. They have decade's worth of deal-making experience and analysis between them. Lax and Sebenius take a contrarian approach to much of the current thinking and teaching on negotiation. They seek to move us away from the familiar win-win and win-lose tactical approaches and help us understand negotiation along the following dimensions: * 1-D: At the Table - tactics * 2-D: Design Value Creating Deals - getting "below the surface to uncover the sources of economic and non-economic value. * 3-D: Away from the table - the setup - setting the table - "ensuring that the right parties have been approached, in the right sequence, to deal with the right issues that engage the right set of interests, at the right table..., at the right time, under the right expectations, and facing the right consequences of walking away if there is no deal." This book focuses heavily on the deal design and setup dimensions. Throughout, the authors reinforce the concept that roadblocks in any one dimension may often be solved in another dimension. The focus is on crafting deals that create long-lasting value for all sides. 3-D Negotiation goes well beyond simply waiting for the other side to talk first once you are all sitting together at a table. Negotiation takes work. It takes planning. It takes analysis and research. And most of all you have to listen. If you are serious about learning the craft of deal design that creates lasting value, Lax and Sebenius are here to help. The authors have created a comprehensive methodology to deal making. To start, they recommend you complete a 3-D barriers audit "to determine what stands between you and the deal you want." An audit consists of the following exercises: * Assess the barriers to the setup * Create a detailed "map" of everyone involved, their roles, their full interests and their best no-deal options * Plan the sequence of events and

Published by Thriftbooks.com User , 16 years ago
I thought that this book was going to be about negotiations. It's a lot more than that. After years of doing negotiations, I was skeptical that a new concept could emerge. I was very surprised by the concepts not because it was incredibly revolutionary, but because it had a lot of common sense. The book teaches business strategy and negotiations. It forces you to look at your business and focus on the right partners and business channels to be able to successfully negotiate. This book has been invaluable to me and would recommend it to any business person.

A valuable book for serious negotiators

Published by Thriftbooks.com User , 16 years ago
Einstein said something to the effect of "make things as simple as possible, but no simpler." The authors of 3D-Negotiation have done just that. They give appropriate credit to deft tactics at the bargaining table, but make a real contribution by illuminating the importance of setting up the optimal conditions for successful negotiation. If you're looking for cheerful cliches about win-win negotiation, you won't find them here. Nor will you find chest-thumping stories about winning through intimidation or brute force. Instead, you'll get insightful analysis of complex business and diplomatic cases, all of which have a mix of competitive and cooperative elements. Anyone who thinks that negotiation is only about who makes the first offer (or for that matter, who's adept at creating a trusting relationship) will get eaten for lunch by readers who master this book.

Taking negotiation beyond us vs. them...

Published by Thriftbooks.com User , 16 years ago
Most books on negotiation that I've read focus on the tactics you use when you're face-to-face with the opponent. But what if you take a step back and shape the negotiation before you even show up? That's the general direction of 3-D Negotiation: Powerful Tools to Change the Game in Your Most Important Deals by David A. Lax and James K. Sebenius. I can see where this would give you a step up in numerous situations... Contents: Part 1 - Overview: Negotiate in Three Dimensions; Do a 3-D Audit of Barriers to Agreement; Craft a 3-D Strategy to Overcome the Barriers Part 2 - Set Up the Right Negotiation: Get All the Parties Right; Get All the Interests Right; Get the No-Deal Options Right; Get the Sequence and Basic Process Choices Right Part 3 - Design Value-Creating Deals: Move "Northeast"; Dovetail Differences; Make Lasting Deals; Negotiate the Spirit of the Deal Part 4 - Stress Problem-Solving Tactics: Shape Perceptions to Claim Value; Solve Joint Problems to Create and Claim Value Part 5 - 3-D Strategies in Practice: Map Backward to Craft a 3-D Strategy; Think Strategically, Act Opportunistically Notes; Authors' Note; Index; About the Authors Lax and Sebenius have extensive experience in working with corporations negotiating multi-million dollar deals, and from that base they have evolved the idea of 3-D negotiation. Basically, you need to look at your deal-making in a multidimensional way instead of just trying to hammer the side across the table. In some cases, this may mean that the party you're trying to do the deal with isn't even the right customer you should be approaching. Or perhaps the no-deal option of the other side is still better than what you have to offer. What then? These guidelines, if followed, can make your time at the table much more productive, and allow both sides to come away with what they need and/or want in the deal. The authors don't completely ignore the strategy of what plays out when the parties are face-to-face. Such things as understanding the Zone Of Possible Agreement (ZOPA) and being aware of the reciprocity factor will keep you from giving up too much too soon. But keeping the deal from quickly becoming a value-claiming effort can lead to possibilities that aren't necessarily envisioned up front. There are plenty of examples from real companies and real deals so that you can see how it works in real life... An excellent read that will allow you to look at your next deal as more than a win-lose proposition...

Published by Thriftbooks.com User , 16 years ago
During a recent conversation with former Disney General counsel Lou Meisinger about negotiating the resolution of commercial litigation, he suggested breaking impasse during the mediation of high-stakes litigation by "transforming the litigation into an opportunity to make a deal." This is the precise advice (in great depth and thorough scope) given by Lax and Sebenius in their terrific new negotiation text, 3-D Negotiation, Powerful tools to Change the Game in Your Most Important Deals. The three dimensions they refer to are tactics, deal design and set-up, tactics being strategies exercised at the bargaining table; deal design involving the invention and structuring of agreements that create greater value for all parties; and, set-up, the architecture of the deal, including selection of parties, sequencing of negotiations among them, addressing the right issues at the best time and considering all no-deal options. The earliest example that make me read hungrily on, concerns Staples' post-start up quest for venture capital. I'll briefly tell the tale stripped of texture and nuance (the more interesting, in-depth account can be obtained by buying the book). Staples, the original big-box office supply store, attracted a formidable competitor early on -- Office Depot. To survive in the newly competitive market, Staples needed expansion capital and it needed it fast. All of the venture capital firms and the investment bankers were valuing Staples at pretty much the same price point, a point unacceptable to Staples' founder. At a loss for new ideas, he called Harvard Business School Professor Bill Sahlman, an expert on venture firms and start-up financing. Sahlman recommended breaking the impasse by changing the deal-design and set-up by finding new players and re-sequencing the negotiation. Together, he and Staples' founder identified investors who were flush with money and potentially interested in better ways to deploy it. These new investors were the limited partners of the old venture capital firms that we're holding firm on pricing. The limited partners, Sahlman suggested, might well pay more for the opportunity to obtain a piece of Staples' action that the investment firms would. Because the VC firms charged hefty management fees (usually 20% of the profits) if Staples offered the deal directly to the VC's investors, those investors could reap 100% of the profits for the same share of the Staples' pie rather than the 80% offered by the VC's. This had the effect of increasing the actual value of each share by 20%. As Lax and Sebenius stress, this result could not have been achieved by negotiations "at the table" or even with the originally identified stake-holders. What Staples did was to "favorably reset the table with right new parties whose interests were far more aligned with the deal he wanted to do." Then it sequenced the process by going back to the VC's and the investment banks, saying, "this thing is filling up fast; do y
Trustpilot
Copyright © 2022 Thriftbooks.com Terms of Use | Privacy Policy | Do Not Sell or Share My Personal Information | Accessibility Statement
ThriftBooks® and the ThriftBooks® logo are registered trademarks of Thrift Books Global, LLC