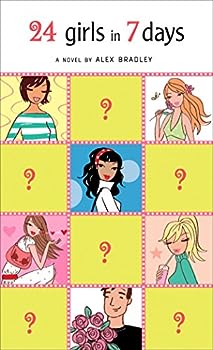 This description may be from another edition of this product. There are few things sadder than Jack Grammar s love life. So when his friends take it upon themselves to get him a date to the prom by placing an intensely humiliating ad in the school paper, they...

Published by Thriftbooks.com User , 14 years ago
24 Girls in 7 Days is the hilarious journey through the one week leading up to Jack Grammar's Senior prom. His two best friends put add in the school news paper for a prom date for Jack. The add starts off as a joke until girls start email him about the add. My favorite part of the book (was very hard to pick) was the introduction to Jack, Percy, and Natalie. The author made them all quick witted and really funny. The intro to the characters makes you love them to the last pages. This book is hilarious with twists and turns that everyone will love. The characters are fresh and very real. I loved every page and was sorry to put it down.

Published by Thriftbooks.com User , 14 years ago
24 girls in 7 days. It's every teenage boy's fantasy, or is it? Jack Grammar is just an average kid with straight A's and two best friends. As the end of his senior year creeps closer, so does prom and Jack is desperate for a date. He's never really had a girlfriend and is extremely shy, so after getting turned down by his longtime crush, his best friends Natalie and Percy decide to help him. Without Jack's knowledge, they post a personals add for him on the school's website, and surprisingly, they soon have over 100 responses to it. Percy and Natalie convince Jack to participate in a "Bachelor"-like competiton in which 24 girls are chosen to go on dates with him. There are only 7 days until prom, and Jack must choose one lucky girl to be his date. The adventure that follows is full of kisses, insults, icecream, and a whole lot of surprises. 24 Girls in 7 Days is by far one of the best books I have ever read. I literally did not put it down until I had finished the whole thing. Just when I thought I had it all figured out, the storyline twisted. That's what turns a good story into a great one. This book is outright hilarious, and really shows how you can change your life for the better. I would most definitely recommend it to anyone who is looking for love, because it goes to show that sometimes love can be found where you least expect it.

Published by Thriftbooks.com User , 16 years ago
Jack Grammar wants nothing more than to go to the prom with his dream girl Pamela. But when he blows his chance, his best friends Natalie and Percy take matters into their own hands. They place an ad in the school paper declaring what a great prom date Jack would make. What started out as a semi-joke turns into to a full fledge date-a-thon with the many applicants vying for Jack's affection and chance to go to prom. The situation seems like every guys dream, but Jack isn't having much fun. In fact, he's more interested in talking to the mysterious FancyPants whose been sending him anonymous e-mails and making out with his best friend. I couldn't put this book down trying to figure out who would be his ultimate prom date. Jack is a great character. Girl readers will fall in love with him and boy readers will find him relatable. This hilarious book is one you shouldn't pass up!

Published by Thriftbooks.com User , 16 years ago
you won't be able to stop reading this is like the sweetest and funniest book i've read in sooo long. it could be really trashy with a title like 24 girls in 7 days but you'll totally have a crush on jack and wish you could be one of his dates. take me to the prom jack!!!!

Published by Thriftbooks.com User , 16 years ago
I just finished this book..its the coolest..and it's really funny too and keeps you guessing. You are going to wonder throughout the book who Jack will take to prom--altho some obviously won't get picked judging by the dates which provides the humor in the book. The story basically is Jack has a lousy date life and then his friends place an ad for him to get a prom date and they get around 40 applicants and narrow the list down to 24 for him to date in 7 days..hence the title. Throughout the book Jack keeps getting e-mails from a "Fancypants" who he is mysteriously drawn too but she won't say who she is..read the book and find out which one of Jacks ladies "Fancypants" is and who he will take to prom! I highyl recommend this book--especially if you are looking for a fun summer read.
Copyright © 2020 Thriftbooks.com Terms of Use | Privacy Policy | Do Not Sell My Personal Information | Accessibility Statement
ThriftBooks® and the ThriftBooks® logo are registered trademarks of Thrift Books Global, LLC