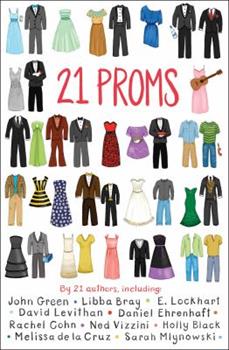 Sometimes the night of your dreams can be a total nightmare.The prom. It's supposed to be one of the best nights of your life. Or, at least, you're supposed to have a good time. But what if you'd rather be going with your best friend's date than your own? What if a sinister underground society of students has spiked the punch? What if your date turns out to be more of a frog than a prince? Or what if he's (literally) an ape?There are ways you can...

Published by Thriftbooks.com User , 13 years ago
This book was awesome. It's a powerful collection, with a wide range of prom stories. There are the traditional prom stories, where a good time is had by all ... or most. There are the anti-prom people, who want nothing to do with the dresses and the disco balls, but make their own fun. And there are a bunch of other stories involving gorillas, chickens, condom dresses, and six-packs of Bud. My favorites from the collection were three amazing stories that stood out against the rest: - "Mom called, she says you have to go the prom" by Adrienne Maria Vrettos - Chicken by Jodi Lynn Anderson - The Great American Morp by John Green I liked them all for different reasons, and I'm not going to spoil the surprises that are hiding in this book. I'm just going to tell you that it's worth the read.

One of the Best Contemporary Compilations Available

Published by Thriftbooks.com User , 14 years ago
I loved every minute of this book. I have read most of the authors' other works, so I shouldn't have been so surprised with how much I enjoyed reading every story, every page. As with any compilation, there were some real standouts, but they were mostly because I could totally relate to them or laughed out loud. "`Mom called, she said you have to go to the prom'" by Adrienne Maria Vrettos was a fantastic story about an uninhibited girl who has the time of her life putting her oddities on display for the world to see. "Prom for Fat Girls" by Rachel Cohn was great because, honestly, what fat girl doesn't want to read about another fat girl getting the guy? And they saved the best for last. John Green's "The Great American Morp" rocked--it was the reason I gave this book five stars rather than four. Great Authors + Great Stories = A Great Read. (Okay, that was pretty cliché and cheesy even for me.)

Published by Thriftbooks.com User , 14 years ago
21 PROMS tells the stories of, well, twenty-one proms. Twenty-one fantastic authors contributed to this collection, and each and every one of the stories is fabulous and enjoyable. A few, however, really stick out in my mind after finishing this book. Holly Black's IN VODKA VERITAS is a creepy story about an evil Latin club. "MOM CALLED, SHE SAID YOU HAVE TO GO TO PROM" is Adrienne Maria Vrettos' contribution to the book. It's a great story that manages, in just a few pages, to create wonderfully three-dimensional characters that I'd love to read more about. BETTER BE GOOD TO ME by Daniel Ehrenhaft is a brilliantly written and romantic story. Aimee Friedman's THREE FATES is a hilarious story about what happens when Abby ends up with three dates instead of going dateless the way she thought she would. THE QUESTION is Brent Hartinger's one-act play that would be wonderful to see performed. PRIMATE THE PROM is Libba Bray's very interesting, original, and unusual story of a boy going to prom with his boyfriend -- who just happens to be a gorilla. THE BACKUP DATE, by Leslie Margolis, is a fabulously well-written story about Jasmine, a whiny but completely believable character, going to prom with her boyfriend and brother's best friend. As you can see, there are quite a few fabulous stories in this collection. The two that I loved the most, however, were these: Melissa de la Cruz told the absolutely true and absolutely hilarious story of her prom in A SIX-PACK OF BUD, A FIFTH OF WHISKEY, AND ME. THE GREAT AMERICAN MORP is John Green's absolutely brilliant story and one of my two favorites about a couple of girls having a "morp," a party that is a backwards prom. In this funny and fantastic story, he introduces characters that I'd absolutely love to see again. I did notice one thing that is interesting, and I want to know why this is: people seem much more likely to write about two gay guys than two lesbians. Quite a few of the stories had gay guys in them, but I can't think of any about two girls who wanted to go to prom together; I don't know why. In fact, I can only think of one book that I've read where the main character is a lesbian: KEEPING YOU A SECRET, by Julie Anne Peters. A good short story, one that has good characters or a hold-your-breath-suspenseful plot or something, has to do it in just a few pages. These were some of the best short stories I can ever remember reading! Reviewed by: Jocelyn Pearce
Copyright © 2020 Thriftbooks.com Terms of Use | Privacy Policy | Do Not Sell My Personal Information | Accessibility Statement
ThriftBooks® and the ThriftBooks® logo are registered trademarks of Thrift Books Global, LLC