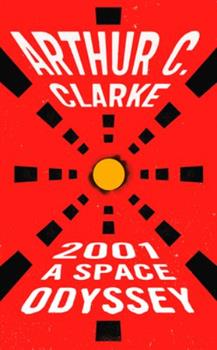 (Book #1 in the Space Odyssey Series)

The classic science fiction novel that captures and expands on the vision of Stanley Kubrick's immortal film--and changed the way we look at the stars and ourselves . From the savannas of Africa at the dawn of mankind to the rings of Saturn as man ventures to the outer rim of our solar system, 2001: A Space Odyssey is a journey unlike any other. This allegory about humanity's exploration of the universe--and the universe's reaction to humanity--is...

Published by Thriftbooks.com User , 13 years ago
**Some Spoilers!*** Love how Clarke uses factual science like the most obvious crater on the moon to house the monolith, the tycho crater, as well as the very strange Saturn moon that has an all white side, Iapetus. How more obious can an alien make it for us to make first contact by keeping monoliths in the center of these obvious places? Besides the changes from jupiter orbit to the Saturn moon as staging grounds for the stargate I found the book to be similar to the movie/ book "Contact" by Carl Sagan. Not sure if you've seen or read, but i think Carl has read 2001. A signal from deep space was sent to earth in Contact and from the moon monolith to deep space in 2001. His story involved his character going through a wormhole to end up in a familiar earth environment (the beach) so as to be comfortable. Very similar here going through a stargate although in 2001 feeling comfortable is achieved in a hotel room, from that point however the stories change. I did know that Bowman became something more from watching the sequel 2010 but not from 2001. Wonder why Kubrik left all that out.

Published by Thriftbooks.com User , 17 years ago
This book is subject to many interpretations, and that alone makes it a great story while it also tends to send people off arguing their own points. I'll try to stick to just one in this review, the one I believe is central to enjoying this book. 2001 (book) reveals more of the details of the story than the movie and that there are some differences (going to Saturn in the book, Jupiter in the film, as an example). This doesn't effect the overall read, but I thought it important to point out that the two (book/film) are different enough to be confusing. Many people have seen the film, or parts of it, and that can bring some to seek out the book and others to wonder why they would bother. The story is of Biblical proportions not only in the sense of the widest timeline in a movie (over 3 million years) but that it covers mankind's history without resorting to a long narrative, but by book ending history or in essence - their is no middle story. Man's destiny is outlined in rather 'dry' terms with little detail. Our ancestral relatives are mysteriously guided by the first monolith and we assume this leads us to our intellectual evolution as the 'bone weapon' becomes a space ship (that's from the movie). No time is wasted explaining the change, you just have to accept it. The second monolith, buried on the moon as a marker for us to discover, assuming we did evolve, sets off the two major parts of the story - Mankinds' curiousity vs. his need for secrecy, which is portrayed by the ignorance of the astronauts to their 'real' mission and the hidden knowledge of the on-board computer entity the HAL 9000. The characters are very flat, as is HAL, and that partly distracts the reader from realizing that technology itself is the central theme. This story is a warning about the inhuman direction that mankind is making with technology. Why wouldn't the actors be dull? We are diluting the individualism of mankind even now. I'll dare say that Kubrick intended to expand on the dryness of Clarke's stories (The Sentinel, for one) so as to remind us of mankinds' foolish dependence on the technology we surround ourselves with. I mention the movie here as it reveals how the collaberation with Clarke had influenced the book. Clarke wrote this novel in tandem with his input on the movie screenplay and besides, Clarke is well known for taking on big issues instead of filling out characters. Back to the story. The malfunctioning of HAL leads to the final shedding of any human element in the story by simply discarding all but one of them. From here on, you experience the story through David Bowman. Victorious over HAL, Bowman has no one to share his final life experience with. The huge monolith, orbiting Saturn, leaves Bowman with a final mission - before he dies, find out what he can. Curiousity wiining out over survival, which seems impossible. This leads to a trip through 'unknown space', a place so 'alien' that Bowman cannot interpret what is going around him

A Powerful Vision of Life

Published by Thriftbooks.com User , 21 years ago
After reading Arthur C. Clarke's short story 'The Sentinal,' filmaker Stanely Kubrick enlisted the author's aide in creating what he deemed the 'perverbial good science-fiction movie.' The result of this great collaberation was '2001: A Space Odyssey.' The novel, which came out after the movie but was created at the same time, is a stirring tale of human evolution, exploration, and hope. The story begins with our ape-like progenitors and their discovery of a odd object- a black monolith, that boosts their IQ to a level that will promote thier evolution. Fast forward three million years: NASA discovers a strange object- a black monolith, buried beneath the lunar surface. When the sun hits it for the first time in three million years it sends a signal across the solar system. The expedition that follows is filled with hope, but will it succeed? The novel does have several minor differences from the 1968 film- for instance the planet of destination is Saturn, not Jupiter. But if you have seen the film and are a little confused as to what the monolith is and just what transformation the astronaut Bowman underwent, the book will answer you questions. A marvel of science-ficton!

A fantastic voyage to the stars!

Published by Thriftbooks.com User , 21 years ago
2001: A Space Odyssey was everything a great science fiction novel should be. The day I started to read this book I found it so engrossing that I finished it the same day! The book does a magnificant job of rendering detailed images to us in mankinds' quest to reach intelligent life. The book touches on so many powerful themes, like man vs. machine, the struggle for survival, and humanity's rise to the space age that one can't help but think about these issues in a whole new light after finishing this great novel.The addicting storyline, along with its pleasant, easy-to-read style will help make this book a favorite of everyone's who can get their hands on it! My personal thanks to Arthur C. Clarke for creating a literary masterpiece that will stand for all of time!

Published by Thriftbooks.com User , 23 years ago
Consider that this book was written almost 30 years ago. Consider what has happened in space exploration since then. One can only wonder at how Clarke and Kubrick were able to achieve this. A movie like this had never been attempted on this scale before. I read this book for the first time, shortly after I saw the movie. This was when it first came out. While Stanley Kubrick's film is a masterpiece on it's own, the book does a great deal to fill in the inevitable blanks in the movie. The movie is unlike anything you have ever seen, very short on dialog, extremely visual. Hence my recommendation that you read the book, then see the movie. It will make more sense. By the way, the movie was among the first real attempts at visual realism with the subject of sci-fi (sorry fellow Star Wars fans, these guys did it first). So well did it succeed, so powerful and detailed were the production values, that it set the standard for sci-fi movies that came after. But, that's a different review. The book seeks to offer an answer to a few of the most intriguing and fundamental questions of all time; "Who are we, how did we get to be what we are, what will become of us?". It begins with the establishment of a connection between our ape-ancestors and an elemental survival dilemma. How do we survive? The means must exist, yet, we are hopelessly weaker and outnumbered by our ecological competitors. An outside force supplies the seed of an idea and in so doing, launches us toward a chain of events in the unforeseeable future. It is up to us to accept the idea, process it, integrate it into our thinking, and apply it to our problem. As the future unfolds, mankind's natural desire to explore leads us to a discovery that will end forever the question of our uniqueness in the universe. It is a discovery that is as impossible for us to understand as it was our survival problem millennia ago. Once again, we must grope in the dark, fearful, yet fascinated. Once again, the seed of an answer is supplied. We are riveted by our curiosity and incapable of stepping back from the urge to discover the next fragment of this trail of crumbs being left for us. The story reaches it's full height with yet another discovery. This is the climactic scene where the chain reaction set off back in the distant past leads to a doorway unlike any other we have stepped through. This is what fans still refer to as the "Ultimate Trip" sequence. If you traveled millions of miles and millions of years, if you found yourself at a door that was clearly created by someone or something well beyond your understanding, if it were impossible to go back but terrifying to go on, if you knew that to step through this door would lead to unpredictable consequences, and if you had no one but yourself to talk to, would you step across the threshold? The dialog is minimalist, but, descriptive in the way only a scientist like Clarke can make it. The dry, dispassionate, scientific, narra
Copyright © 2020 Thriftbooks.com Terms of Use | Privacy Policy | Do Not Sell My Personal Information | Accessibility Statement
ThriftBooks® and the ThriftBooks® logo are registered trademarks of Thrift Books Global, LLC