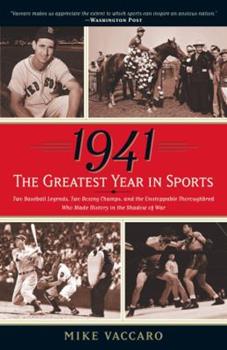 1941--The Greatest Year in Sports: Two Baseball Legends, Two Boxing Champs, and the Unstoppable Thoroughbred Who Made History in the Shadow of War

Joe DiMaggio . . . Ted Williams . . . Joe Louis . . . Billy Conn . . . Whirlaway Against the backdrop of a war that threatened to consume the world, these athletes transformed 1941 into one of the most thrilling years in sports history. In the summer of 1941, America paid attention to sports with an intensity that had never been seen before. World War II was raging in Europe and headlines grew worse by the day; even the most optimistic people began...

One of the Best Sports books on the market

Published by Thriftbooks.com User , 13 years ago
Mike Vaccaro does it again. His New York Post columns are great, but his ability to pull a book together is fantastic. He also just recently wrote the foreword to the SportsByTheNumbers Yankees book: New York Yankees: An Interactive Guide to the World of Sports (Sports by the Numbers) If you love Mike Vaccaro, the New York Yankees, or baseball, then you need to buy both of these books.

Published by Thriftbooks.com User , 13 years ago
Every summer I like to read a baseball book about the history of the game. Adding boxing and horse racing gave me an even better perspective about sports in that bygone era

Published by Thriftbooks.com User , 14 years ago
An eminently readable, enjoyable and enlightening work, one that weaves together not only Joe DiMaggio's and Ted Williams' early spectacular achievements, Vaccaro adds world history to the mix, breathing life into the memorable year, 1941. Throw in Billy Conn versus Joe Louis and mention the leading race horse of the day, and you have a full year of records, successes, and noteworthy competition -- darkened by Lou Gehrig's rapid demise and death and the Japanese and German march across the globe. Using daily highlights of games and events, quotes and personal angles on the stars, interviews with men who were there, and other sporting details, Vaccaro makes 1941 a wonderful year for sports fans.

Published by Thriftbooks.com User , 14 years ago
I have read the definitive biographies recently written about Joe DiMaggio and Ted Williams and wondered if I really needed to take a chance of this book. What a pleasant surprise! Author Mike Vaccaro kept me riveted in his description of DiMaggio gulping down coffee and chain smoking his way in his quest for another hit to keep his streak going. The personality of Teddy Ballgame comes through loud and clear in his chase to become the first .400 hitter since Bill Terry in 1930. I am not a fan of boxing or horse racing, but the Joe Louis and Billy Conn fight held at the Polo Grounds made me feel as though I was there. I couldn't put the book down. I'd heard of Whirlway, but that's as much as I knew. He won the triple crown in 1941 and was famous for his long tail. I'd heard Clem McCarthy describe the race on a Gillette phonograph record several years ago, and this book made it more meaningful to me. The same with the Louis/Conn fight. This is more than a sports' book. It is American history with the country wondering if war would soon include them. What a year! Thanks, Mike Vaccaro, for bringing it alive to your readers.

Vaccaro does it again

Published by Thriftbooks.com User , 14 years ago
I am a big fan of Mike Vaccaro's writing and he has impressed me yet again. Mike lyrically weaves the details, histories and human dimensions of the four incredible athletic events of 1941; all in the context of an America on its way to a nation altering war. He adds so many dimensions to the stories through his detailed research and anecdotal style. It's a great summertime read for sports fans and history fans alike.
Trustpilot
Copyright © 2022 Thriftbooks.com Terms of Use | Privacy Policy | Do Not Sell My Personal Information | Accessibility Statement
ThriftBooks® and the ThriftBooks® logo are registered trademarks of Thrift Books Global, LLC