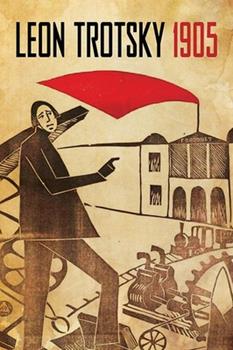 by Leon Trotsky and Leo Trotzki

In January of 1905, thousands of Russian workers, led by a priest on the payroll of the Tsar himself, marched to the gates of the Winter Palace with the intention of humbly petitioning their ruler for an eight hour work day. They were met by an intransigent detachment of royal guards who opened fire, killing hundreds of demonstrators. This massacre was the spark that set off an uprising that would shake the Russian Empire to its very foundation before...

Published by Thriftbooks.com User , 24 years ago
This is a history of the 1905 revolt in St. Petersburg Russia which became the "great prologue to the revolutionary drama of 1917." The book was written by one of the leading participants in that revolt--Leon Trotsky. Unlike many of Trotsky's later writings this 1908 book covers the historical events of 1905 without regard to political considerations of the Trotsky/Stalin conflict of the 1920s. Thus we are able to enjoy free-wheeling style of writing in the book free of the guarded language and descriptions which characterizes much of his other works. With its descriptions of the economic conditions of the Russian Empire at the turn of the century, the book reminds the reader of Lenin's 1899 book--"The Development of Capitalism in Russia." When the book was brought out by Random House in 1972 and later in paperback by Vintage books it became a popular seller even in the mainstream book stores. Thus it has its place as a memorial to a different time in the United States when a spirit of unrest blew across the nation.
Trustpilot
Copyright © 2022 Thriftbooks.com Terms of Use | Privacy Policy | Do Not Sell My Personal Information | Cookie Preferences | Accessibility Statement
ThriftBooks® and the ThriftBooks® logo are registered trademarks of Thrift Books Global, LLC