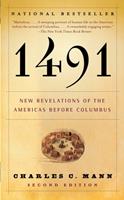 1491 (Second Edition): New Revelations of the Americas Before Columbus

NATIONAL BESTSELLER - A groundbreaking work of science, history, and archaeology that radically alters our understanding of the Americas before the arrival of Columbus in 1492--from "a remarkably engaging writer" (The New York Times Book Review). Contrary to what so many Americans learn in school, the pre-Columbian Indians were not sparsely settled in a pristine wilderness; rather, there were huge numbers of Indians who actively molded and influenced...

Published by Domi , 3 months ago
As an anthropology student, I am fascinated by how much I have learned from this book. I really enjoyed it.

Published by Thriftbooks.com User , 15 years ago
I do love reading history, and this one was totally readable. Most interesting.

Published by Thriftbooks.com User , 17 years ago
Although recent years have yielded significant progress in understanding how "Indians" lived throughout the Americas before 1492 and Columbus, only isolated bits of the story have reached the popular press. Far too many people still hold to one of two myths of the Indians, or have little conception at all of pre-Columbian America. The first popular myth is that the Indians were a bunch of primitive savages just keeping the land warm until superior Europeans showed up. It's sad to read reviews here that assert that because Indians used stone tools they were therefore "stone age", with the implication that their culture was no further advanced than that early period. The second myth makes the Indians into proto-flower-children, naively and simply in tune with their environment. Both myths are based on stereotyping and are condescending to the pre-Colombians. How could people spread over two continents and many millennia be briefly summarized? They can't be! The Americas saw the development of a broad range of cultures, just like every other inhabited area of the world. Some cultures overstressed their environment and soon collapsed. Others created stable conditions under which they could survive for generations. (Which is not the same as saying they didn't impact nature.) But even the latter could be brought down by climate change, political instability, disease (especially European), or contact with outsiders (Indian or European). Great cities arose in mesoamerica and the Andes, and also in other areas when the right conditions prevailed. And sophisticated cultures existed even where city building wasn't favored. This book takes the reader through a vibrant overview of centuries of Indian culture both before and shortly after Columbus landed. Much of the narrative is based on work-in-progress by archaeologists and historians, and will certainly become dated with time, but it is an important update to the common, current understanding of the subject. For those not enthralled by one of the myths I mention above, most Americans recall our history along the lines of Scene 1: The Pilgrims land and encounter Indians who teach them how to grow corn; they then have a big Thanksgiving party together. Scene 2: Americans moving inland encounter savage Indians who need to be exterminated or moved to reservations to make the continent safe for manifest destiny. Scene 3: The few remaining Indians are victims of brutal European suppression, and we need to buy jewelry and pottery from them to make ourselves feel better about the situation. This book is a welcome update to our thinking about the Americas before Columbus. It's also one of the best books I've read in long time, and I highly recommend it.

Published by Thriftbooks.com User , 17 years ago
Mann's excellent book does not deliver "new" revelations so much as an accomplished and respected historian's summation of the salient points known to date about the history of the Americas. Certainly much of the material is new to many readers, and in Mann's competent prose, the information is presented in an understandable and compelling style. Significantly, Mann balances his sound and rigorous research with suppositions based on his own remarkable insights. It is a clever and interesting read for the lay historian--as well as an important book for researchers into early American history.

Published by Thriftbooks.com User , 17 years ago
If you thought, as I did, that the Americas prior to Columbus were a couple of barren continents occupied by a sparce population of savages, you are in for a mindblowing surprise in this wonderful new book. There may have been 100 million people living in the Americas in 1491, perhaps more than in Europe. There were bigger cities, some with running water and botanical gardens, larger than any in Europe. Did you know the Inkas invented the salad bar? Okay, that's a joke, but the other stuff is true and a zillion other amazing things. Other books and articles on preColumbian America have disappointed me with their fantasy: Chinese in Rhode Island, King Arthur in Kentucky, aliens in Peru, etc. But this is solidly researched by an award-winning science writer, with endorsements from some heavyweight historians--Richard Rhodes, Tom Powers, Joseph Ellis, and others. There are clear and helpful maps, copious and readable footnotes, and a H-U-G-E bibliography for those of us who teach or just want to know more. On a personal note, Mann explains why he uses the term "Indian" rather than "native American" or more politically correct terms. The Chippewas (aka Ojibwa) in my family always called themselves Indians, so this makes me realize Mann really immersed himself in the subject. This is an important, fascinating, readable, and handsome book
Trustpilot
Copyright © 2022 Thriftbooks.com Terms of Use | Privacy Policy | Do Not Sell or Share My Personal Information | Accessibility Statement
ThriftBooks® and the ThriftBooks® logo are registered trademarks of Thrift Books Global, LLC