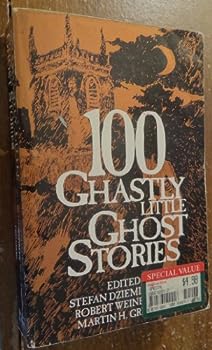 Be afraid, be very afraid: "really "scary things can come in small packages, and these 100 frightening little tales offer big chills and thrills. They represent more than 150 year's worth of writing,... This description may be from another edition of this product.

Published by Thriftbooks.com User , 18 years ago
Let's get the stinkers out of the way first. Oscar Wilde's "The Sphinx Without a Secret" is a story without a ghost, or even a fright. Very disappointing from such a talented writer. That is by far the worst story, so let's not dwell on it."The Sixth Tree" shows promise but suffers from a predictable ending, though it does offer a good little moral about man's misplaced reliance on science and, by extension, his own intelligence.The best story was a much harder call, but I nominate "The Night Caller" by G. L. Raisor. The first line sets a wonderfully malignant tone: "Sherry Elder's descent into madness began on a Thursday." The rest of the story is a fast-paced masterpiece of implied doom and ominous overtones. The word "ghost" isn't mentioned, nor is the identity of the "ghost" stated, but the author makes it clear, regardless. The story is so effective because the reader is free to make his own conclusion.But there are other fine stories. "The Coat" is menacing, "Mandolin" touching and endearing though it, like Wilde's story, doesn't have a ghost. "The Metronome" is pure vengeance from a murdered child, and Fred Chappell's "Miss Prue" deserves mention for its breathtaking descriptive prose, such as these gems: "His eyes were like cinders in the deep sockets. He seemed to belong more to the cool gray autumn wind than to the world of animal flesh." "His voice was windblown ash in a desert land." "She flicked her hand at the question as if it were a tedious housefly." "His voice was like the sound of wind in a ragged thornbush." Great stuff!Finally, "Summerland" is effective, due to its cynical tone toward séances and spiritualism, in a subtle and understated way, and implies (again, without coming out and stating it) the truth about where our souls go. Or, more specifically, the soul of a man who rents out a decrepit house for the price of a mansion. The editors have compiled a treasury of ghost stories, old and new, gothic to modern. No horror library is complete without it.
Copyright © 2022 Thriftbooks.com Terms of Use | Privacy Policy | Do Not Sell My Personal Information | Accessibility Statement
ThriftBooks® and the ThriftBooks® logo are registered trademarks of Thrift Books Global, LLC